US of A and Iraq

Thoughts On The Iraq Invasion. It has now been eighteen years since the Iraq invasion, and I’m still not done raging about it. 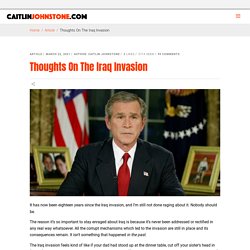 Nobody should be. Here's A Comprehensive Explainer About Why The United States Invaded Iraq. Iraq: A Deadly Deception. On the evening of 9/11, George W Bush made a vow to the American public - that he would defeat terrorism. 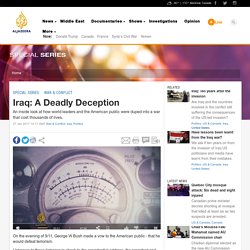 Unknown to those listening in shock to the presidential address, the president and his advisers had already begun planning their trajectory into an invasion of Iraq. It was packaged as "holding responsible the states who support terrorism" by Richard Perle, a Pentagon adviser between 2001 and 2003. "I believe it represented a recognition that we would never succeed against the terrorists if we went after them one at a time and as long as governments were facilitating the organisation, training, equipping of, financing of terrorist organisations, we were never going to get it under control," says Perle. CIA Analyst Who Interrogated Saddam Hussein Just Blew the Lid Off the US 'Official Story' A CIA analyst who interrogated Iraqi leader Saddam Hussein has some damning words about the invasion, saying the United States “got it wrong” — and was ‘critically mistaken’ on its military action in the country. 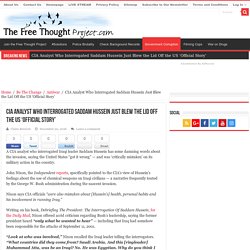 John Nixon, the Independent reports, specifically pointed to the CIA’s view of Hussein’s feelings about the use of chemical weapons on Iraqi civilians — a narrative frequently touted by the George W. Bush administration during the nascent invasion. UK Inquiry Releases Scathing Report On Iraq War. This Month Marks 25 Years the U.S. Has Been at War in Iraq. (Photo: Jason Fudge / Flickr) Saturday, January 17, marked 25 years — a full generation — since the 1991 launch of a U.S. 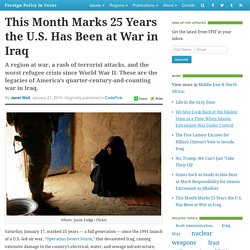 -led air war, “Operation Desert Storm,” that devastated Iraq, causing extensive damage to the country’s electrical, water, and sewage infrastructure, with terrible public health consequences. A quarter-century later, the U.S. is still bombing, and over 3,400 U.S. troops are in the country. US Prepares Massive Shipment Of Thoughts And Prayers To Kurds. WASHINGTON — In the latest expansion of US humanitarian aid to besieged Kurdish Yazidis and Christians in northern Iraq, President Obama said this morning he would be sending a massive shipment of thoughts and prayers, sources confirmed. 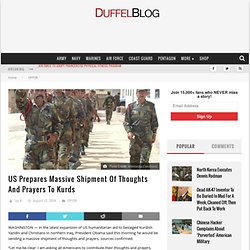 “Let me be clear: I am asking all Americans to contribute their thoughts and prayers, which I have directed the Secretary of Defense to deliver to the Kurds any way possible, as long as it does not involve boots on the ground, or any kind of strategic planning,” Obama said in a statement from The White House. 9 Public Figures Who Were Wrongly Maligned for Opposing the Iraq War

In the face of such mass hostility, in a suffocating political climate where honorable dissent was neither welcome nor considered patriotic, it took a brave, principled human being, particularly one in a position of prominence, to publicly challenge the increasingly arrogant status quo. 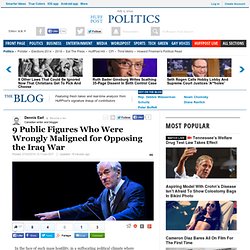 When the George W. Bush administration commenced its global sales pitch to invade Iraq in 2002, misplaced fear and overly rosy projections for its success helped make it happen. If only they had heeded the prescient warnings of these nine wrongly maligned individuals, America would not be in the horrific, never ending mess it finds itself in today: 1. Eric Margolis. ‘To Defeat Them, I Must Become Them,’ John Kerry Says While Putting On Black Face Mask. ERBIL, IRAQ—After meeting with senior Iraqi leaders to discuss the country’s increasing sectarian violence, U.S. 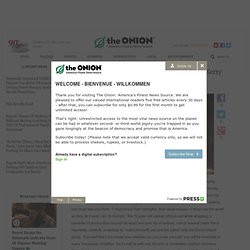 Secretary of State John Kerry retired to his hotel room Wednesday, where he is said to have donned the black clothing and black face mask commonly worn by ISIS militants while reportedly murmuring to his reflection that in order to defeat one’s enemy, one must become them. “I must know their strengths, their weaknesses—I must see the world as they do if ever I am to triumph,” the 70-year-old cabinet official said while wrapping a bandolier of ammunition around his waist and over his shoulders, one of several steps Kerry reportedly carefully undertook to “make [himself] one and the same” with the Sunni militant group.

“It is said that if you know your enemies as you know yourself, you will be inviolable in many thousands of battles. So it shall be with me. Rice Warns That ‘Smoking Gun’ Of Proof Of Iraqi Nuclear Weapons May Be A ‘Mushroom Cloud’ Bremer’s 100 orders: The true scale of Iraq’s rape and destruction. If you’re a US Citizen (and even if you’re not), ask yourself one important question with reference to Iraq: If the answer is "no" then you don’t understand the true destruction of Iraq. 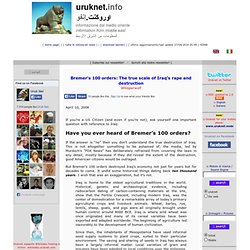 This is not altogether something to be ashamed of; the media, led by Murdoch’s "FOX News" has deliberately refrained from covering the laws in any detail, mostly because if they did reveal the extent of the destruction, good American citizens would be outraged. But Bremer’s 100 orders destroyed Iraq’s economy not just for years but for decades to come. It undid some historical things dating back ten thousand years. I wish that was an exaggeration, but it’s not. Iraq Keeps Drunk Texting CENTCOM. AL UDEID AIRBASE, QATAR – Returning from a well-deserved holiday break, members of Central Command’s Forward Headquarters were startled to discover more than 100 text messages left on their phone from what looked like an extremely drunk and depressed Iraq. 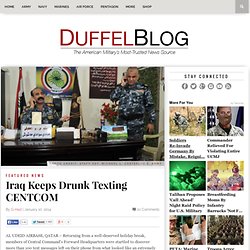 “Salaams” read the first dozen, repeated every few hours, inter-spaced with an occasional “You up?” According to CENTCOM officials, the command has been doing its best to ignore Iraq over the past two years since the United States withdrew from the country in 2011, but every time around December they start getting an avalanche of drunken texts, sobbing late-night phone calls, and lonely e-mails. EUCOM and NORTHCOM also told CENTCOM that they’ve seen adverts from Iraq on CraigsList as “Single Unoccupied Country seeks Rich Western Nation For Ten-Year Commitment. No Jews.” State Department blocks report on path to Iraq War. The U.S. 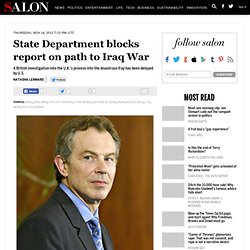 State Department has obstructed the publication of a highly anticipated report, which addresses the U.K.’s process into the Iraq war. According to Britain’s Independent newspaper: Although the [British] Cabinet Office has been under fire for stalling the progress of the four-year Iraq Inquiry by Sir John Chilcot, senior diplomatic sources in the US and Whitehall indicated that it is officials in the White House and the US Department of State who have refused to sanction any declassification of critical pre- and post-war communications between George W Bush and Tony Blair. U.S. authorities are thus de facto blocking the publication of evidence about war-making decisions, including highly controversial Bush-Blair interchanges that are understood to be peppered with dubious reasoning for deploying troops. Meet the Generals Who Spoke Out Against Donald Rumsfeld's War. By late 2001, briefing Secretary of Defense Donald Rumsfeld was familiar territory for Lieutenant General Greg Newbold.

As director of operations on the Joint Chiefs of Staff, Newbold, a three-star in the Marines, had done it many times since Rumsfeld had arrived at the Pentagon earlier in the year, and had come to know the routine: the constant interruptions, the theatrics, the condescension. But, according to Newbold, there was something different, and alarming, about one particular briefing around that time: the topic. It was about going to war with Iraq. How Many People Do You Think Died During the Iraq War? Obama Orders Reinvasion Of Iraq After Illuminating Trip Through Bush Presidential Library. DALLAS—After taking an “eye-opening” tour of the newly dedicated George W. Bush Presidential Library and Museum in Dallas Thursday, President Barack Obama reportedly ordered the United States military to reinvade Iraq. The president told reporters that the museum’s numerous displays provided illuminating information concerning the ongoing threat posed by Iraq and the necessity of re-deploying combat troops in order to bring stability and lasting democracy to the troubled country.

“I have no doubt in my mind, after spending some time in Mr. Bush’s library and museum, that the United States simply must intervene in Iraq in order to temper volatility in the Middle Eastern region as a whole,” Obama said, noting that bombers and approximately 250,000 ground troops were currently en route to the Middle Eastern nation. “The way I now see it, we have a responsibility as Americans to create that kind of change and to lead the world by example.” “They hate our freedoms,” Obama continued. The Iraq War Ten Years After. Washington, DC, March 19, 2013 – The U.S. invasion of Iraq turned out to be a textbook case of flawed assumptions, wrong-headed intelligence, propaganda manipulation, and administrative ad hockery, according to the National Security Archive's briefing book of declassified documents posted today to mark the 10th anniversary of the war.

The Archive's documentary primer includes the famous Downing Street memo ("intelligence and facts were being fixed around the policy"), the POLO STEP PowerPoint invasion plans (assuming out of existence any possible insurgency), an FBI interview with Saddam Hussein in captivity (he said he lied about weapons of mass destruction to keep Iran guessing and deterred), and the infamous National Intelligence Estimate about Iraq's weapons of mass destruction (wrong in its findings, but with every noted dissent turning out to be accurate). A bullet-pointed set of notes discussed by Defense Secretary Donald Rumsfeld with Gen. 10 Years in Iraq. Photo courtesy of Terron Sims. Read Terron’s story here. Photo courtesy of Johnathan Rue. Read Jonathan’s story here.

Photo by Daniel Orchard. Read Daniel’s story here. The Costs of War: 10 Years After Iraq Invasion, New Study Tallies the Massive Human, Financial Toll. This is a rush transcript. Copy may not be in its final form. AARON MATÉ: It was 10 years ago today that the U.S. invaded Iraq on the false pretext that Saddam Hussein was hiding weapons of mass destruction. The attack came despite worldwide protest and a lack of authorization from the U.N. —from the U.N. Security Council. Iraq War Retroactively Justified By Discovery Of Weapons Of Mass Destruction. Although delayed, former Secretary of State Colin Powell was overjoyed that he finally had facts and conclusions based on solid intelligence.

The Last Casualty: The tragic end to a liberal Iraq. Iraq War 10-Year Anniversary: What It Was Like to Oppose It in 2003. US Bombing of Iraq: The Toxic Legacy Continues. Foreign Policy Features CIA Document Released to National Security Archive. Washington, DC, September 5, 2012 – The online magazine ForeignPolicy.com today published an extraordinary CIA document on the recent Iraq war which the National Security Archive obtained through a Mandatory Declassification Review (MDR) request to the CIA. Www.fas.org/sgp/crs/mideast/RS21968.pdf.