Islamic threat, war on terror and the true face of neoliberalism

What frightenes the neoliberal masterminds really deeply, is a tolerant and peaceful Islam. There is the experience, made in the sixties, after Malcolm X returned from his pilgrimage to the United States with the concept of a peaceful Islam.

This was a lesson on the deep impact on the resilience which an moderate islamic society could oppose to neoliberalism. Why are black people turning to Islam? Black conversion or "reversion" to Islam is not new; it has been taking place in the African diaspora since time immemorial. 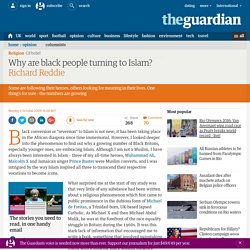 However, I looked deeper into the phenomenon to find out why a growing number of Black Britons, especially younger ones, are embracing Islam. Although I am not a Muslim, I have always been interested in Islam – three of my all-time heroes, Muhammad Ali, Malcolm X and Jamaican singer Prince Buster were Muslim converts, and I was intrigued by the way Islam inspired all three to transcend their respective vocations to become icons. 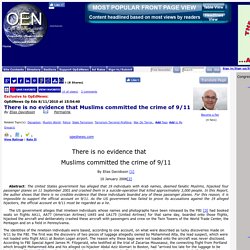 US SECRET SERVICE UNCOVERS: THE WEST WANTED AN ISLAMIC TERROR STATE - Jürgen Todenhöfer. Dear friends, according to the US secret service, DIA, the Obama administration has known as early as August 2012 that Al Qaeda /AQI, IS, ISIS) and other extremists were heading the Syrian rebellion. 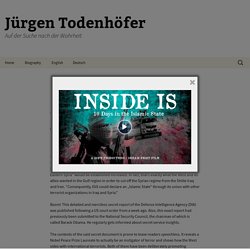 As a result, the “possibility that a Salafist principality in Eastern Syria“ would be established increased. In fact, that’s exactly what the West and its allies wanted in the Gulf region in order to cut off the Syrian regime from the Shiite Iraq and Iran. “Consequently, ISIS could declare an „Islamic State“ through its union with other terrorist organizations in Iraq and Syria.” Boom! This detailed and merciless secret report of the Defence Intelligence Agency (DIA) was published following a US court order from a week ago. Dangerously disproportionate: the expanding security state in Europe. September 11, 2001 The Crimes of War Committed “In the Name of 9/11″: Initiating a Legal Procedure against the Perpetrators of 9/11. Initiating a Legal Procedure against the Perpetrators of 9/11 Prof. 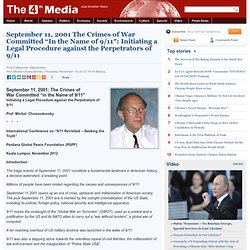 Michel Chossudovsky International Conference on “9/11 Revisited – Seeking the Truth” Epn2016474p21. War Made Easy: How Presidents & Pundits Keep Spinning Us to Death (2007) Now the truth emerges: how the US fuelled the rise of Isis in Syria and Iraq. The war on terror, that campaign without end launched 14 years ago by George Bush, is tying itself up in ever more grotesque contortions. 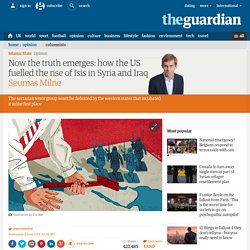 On Monday the trial in London of a Swedish man, Bherlin Gildo, accused of terrorism in Syria, collapsed after it became clear British intelligence had been arming the same rebel groups the defendant was charged with supporting. The prosecution abandoned the case, apparently to avoid embarrassing the intelligence services. Noam Chomsky: The Consequences of Wielding a Sledgehammer Against All U.S. Enemies Around the World. A continuation of longtime activist and academic Noam Chomsky’s essay, “Masters of Mankind,” from his new book, Who Rules the World? 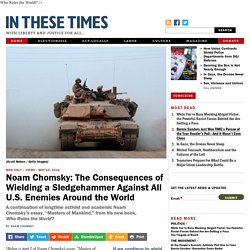 If we continue to wield the sledgehammer, tacitly following the jihadi script, the likely effect is even more violent jihadism with broader appeal. [Below is part 2 of Noam Chomsky’s essay, “Masters of Mankind,” excerpted from his new book, Who Rules the World? If you missed the first part of his essay, click here to read it. This piece first appeared in TomDispatch.] 14 Years After 9/11, the War on Terror Is Accomplishing Everything bin Laden Hoped It Would. Fourteen years later and do you even believe it? 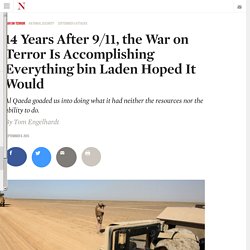 Did we actually live it? Are we still living it? And how improbable is that? Fourteen years of wars, interventions, assassinations, torture, kidnappings, black sites, the growth of the American national security state to monumental proportions, and the spread of Islamic extremism across much of the Greater Middle East and Africa. France's Former Foreign Minister: UK Government Prepared War in Syria Two Years Before 2011 Protests. Frankreichs Außenminister: Der Krieg in Syrien seit langem in London geplant. Sorting Facts From Fiction About the US Withdrawal From Syria. 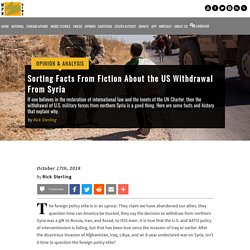 They claim we have abandoned our allies, they question how can America be trusted, they say the decision to withdraw from northern Syria was a gift to Russia, Iran, and Assad, to ISIS even. It is true that the U.S. and NATO policy of interventionism is failing, but that has been true since the invasion of Iraq or earlier. Permanent War and Terror. The “War On Terror”, an outgrowth of the crimes of September 11, 2001[1], was never a war on terror. 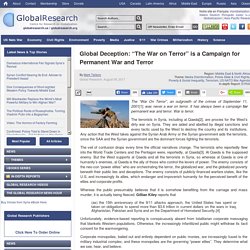 It has always been a campaign for permanent war and terror. War is terror. Plans for Redrawing the Middle East. The Norwegian Parliament’s Standing Committee on Foreign Affairs has voted to conduct an independent investigation into Norway’s involvement in the Libya War, 2011. 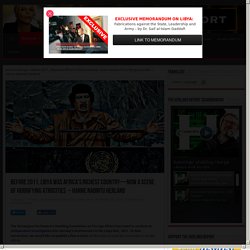 In that connection, we would like to publish a few articles on this topic to assist the committee in its vital efforts. The aim is to uncover whether the UN resolution on taking “responsibility for protecting civilians” was an excuse. 'They should have known better': Chilcot report means little to Iraqis mourning Baghdad attack. A digger chipped away at the facade of a building on one side of the blackened road. On the other a family stood amid the devastation to lay candles for a missing loved one. All around hung posters announcing the deaths of husbands, fathers, sons and cousins. Women had died here too, but they were mourned privately. US and UK Supplied Chemical Weapons to Terrorists in Syria. VISIT MY NEW WEB SITE: stephenlendman.org (Home – Stephen Lendman). Contact at lendmanstephen@sbcglobal.net. Numerous accusations by Washington and its rogue allies about Syria using chemical weapons were fabricated.

Rich in oil and natural resources, the continent holds a strategic position. Seymour Hersh Says Hillary Approved Sending Libya’s Sarin to Syrian Rebels. What is Going on in Syria? Iraq and Afghanistan Wars Have Cost $75,000 Per American Household. Why Obama Prioritizes Ousting Assad Over Defeating Syria’s Jihadists (I) Noam Chomsky: The US, Not Iran, Poses Greatest Threat to World Peace. Yemen could be 'worst' humanitarian crisis in 50 years. Arab spring. If the Libyan war was about saving lives, it was a catastrophic failure. The West and Terrorism. Professor Jules Dufour relentlessly wrote this article, his last article on his hospital bed. In his last hours his main concern was to dismantle the media propaganda which supports US-led wars. He passed away a few days later on August 6. Jules Dufour will live forever.

I spoke to him shortly before his passing. While on his death bed from a terminal illness, both his mind and his heart had become embedded in the future of humanity. Jules Dufour lives. During his entire life, his research and teachings were geared towards revealing the unspoken truth concerning the American empire, how it kills and destroys people’s lives, impoverishes entire populations. “The Worldwide control of humanity’s economic, social and political activities is under the helm of US corporate and military power.

Among his Global Research articles is his analysis of US military bases on foreign soil first published in 2007. The Worldwide Network of US Military Bases By Prof. According to Jules Dufour: I. II. III. Fallujah babies: Under a new kind of siege - Features. Fallujah, Iraq - While the US military has formally withdrawn from Iraq, doctors and residents of Fallujah are blaming weapons like depleted uranium and white phosphorous used during two devastating US attacks on Fallujah in 2004 for what are being described as "catastrophic" levels of birth defects and abnormalities. Der Arzt und die verstrahlten Kinder von Basra. Depleted Uranium Whistleblowers: Cancer, Diabetes and You.