The collapse of Iraq's Shiite alliance. US Secretary of State John Kerry (L) gives a thumbs-up as Iraqi Prime Minister Haider al-Abadi (R) welcomes him at the prime minister's palace in Baghdad, April 8, 2016. 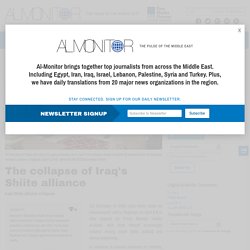 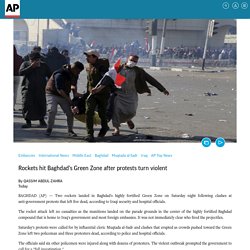 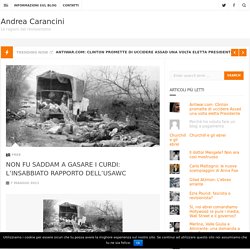 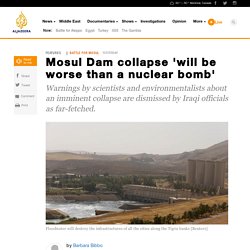 After six months of frantic security and logistical preparations, an Italian company has kicked off the repair works to beef up the dam, under the protection of five hundred Italian soldiers and Kurdish Peshmerga forces. The Italian company,TREVI, will have about 18 months to prevent the foundations of the dam from plunging deeper underground, averting an impending catastrophe. Experts warn that if the dam collapses, up to 11.11 billion cubic-metres of water known as Lake Dahuk, will submerge Mosul and create an inundation that will affect the lives of millions of people living along the banks of the Tigris river. The engineering company is also training local staff to use its technology. 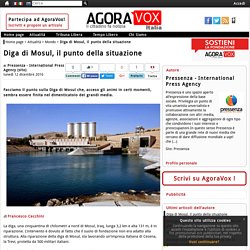 Kurdistan24. How to resolve Iraq’s Shiite militia problem. The operation to liberate Mosul will almost certainly bring an end to the Islamic State’s territorial control in Iraq and will be the death knell of the so-called “Caliphate.” 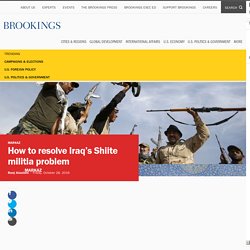 But what comes next? Iraq lacks the resources and the capacity to rebuild the towns and cities that have been destroyed since the anti-ISIS campaign was launched, and there are no guarantees the international community will fill that gap. Iraq is suffering the consequences of corruption, sectarianism, and dysfunctional governance—but those aren’t new. To compound matters for the Iraqi state, and its people, it also has to contend with the rise of Shiite militia groups. Behind Erdogan’s Dismissive Statements to Iraq’s Prime Minister. October 12, 2016 Turkey’s Iraq policy changed considerably in the past half-decade. 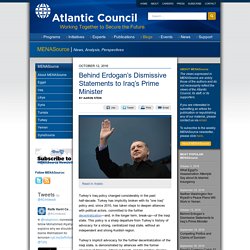 Turkey has implicitly broken with its “one Iraq” policy and, since 2010, has taken steps to deepen alliances with political actors, committed to the further decentralization—and, in the longer term, break-up—of the Iraqi state. This policy is a sharp departure from Turkey’s history of advocacy for a strong, centralized Iraqi state, without an independent and strong Kurdish region. Turkey’s implicit advocacy for the further decentralization of the Iraqi state, is demonstrated by alliances with the former governor of Ninewa, Atheel al-Nujaifi, and his brother, Osama. LIVE BLOG: The battle for Mosul. Mosul Eye, a blog which reports from inside the city, describes the conditions since the start of the Iraqi offensive. 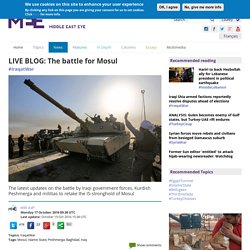 It describes Islamic State presence as patchy, although strong in many places including a section of the city rich with a bomb-making factories, prison camps holding thousands of people - including Yazidi women enslaved by the group after the capture of Sinjar in 2014. MEE has summarised the blog, but you can read the full post by clicking this link. Surveillance aircraft in sky at all hours.An uneasy quietness in the city.

People are out for few hours and then disappear. Life in the city is over by 4pm.IS fighters do not appear much. Lawmakers urge administration to focus on what comes after Mosul. Red Cross: One million could flee Mosul battle in Iraq - News from Al Jazeera. Iraq humanitarian crisis in numbers 10 million Iraqis in dire need of aid 3.3 million internally displaced 2.6 refugees became refugees in past two years Up to one million Iraqis risk facing displacement in the coming weeks as fighting intensifies ahead of a government offensive to retake the northern city of Mosul from ISIL, according to the International Committee of the Red Cross (ICRC). 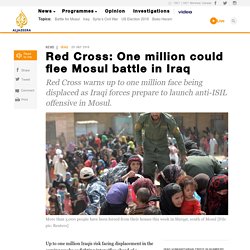 "The situation is unpredictable but we must prepare for the worst," Robert Mardini, the ICRC's regional director for the Near and Middle East, said in a statement on Friday. Erdogan: Turkey 'will be at table' for Mosul talks. Battle for Mosul launched by Iraq PM Haider al-Abadi - News from Al Jazeera. Iraq war map: Who controls what. Mine, trincee e trappole Così difendono i jihadisti. Nell'inferno di Baghdad: "Sembrava un girone dell'inferno, questo Paese non ha futuro"