Luay لؤي الخطيب sur Twitter : "Today, demos across #Iraq are all united with one flag and one spirit against corruption, mismanagement and terrorism. Hayder al-Khoei sur Twitter : "Maliki: #Iran's military assistance helped us confront ISIS attack whilst the West imposed an "arms embargo" on #Iraq. New Eastern Outlook sur Twitter : "Logistics 101: Where Does ISIS Get Its Guns? #Syria #Iraq #MENA #GCC #NATO #Turkey. Logistics 101: Where Does ISIS Get Its Guns? Since ancient times an army required significant logistical support to carry out any kind of sustained military campaign. 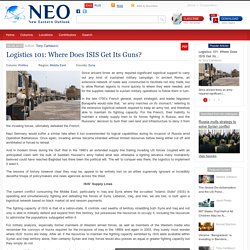 In ancient Rome, an extensive network of roads was constructed to facilitate not only trade, but to allow Roman legions to move quickly to where they were needed, and for the supplies needed to sustain military operations to follow them in turn. In the late 1700’s French general, expert strategist, and leader Napoleon Bonaparte would note that, “an army marches on its stomach,” referring to the extensive logistical network required to keep an army fed, and therefore able to maintain its fighting capacity. For the French, their inability to maintain a steady supply train to its forces fighting in Russia, and the Russians’ decision to burn their own land and infrastructure to deny it from the invading forces, ultimately defeated the French.

ISIS’ Supply Lines. The biggest crime you’ve never heard of. In 2003 UN imposed sanctions against Iraq – instigated by US and Britain – as a result of which 500,000 children died. 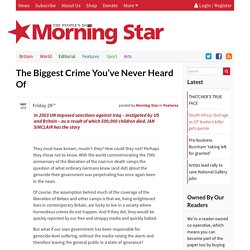 IAN SINCLAIR has the story They must have known, mustn’t they? How could they not? Perhaps they chose not to know. Маяковский sur Twitter : "Mystery men hunt down cultural past stolen by #IS #Syria #Iraq @conflictantiq @MoneyJihad. Mystery men hunt cultural past stolen by ISIL. ISIL’s destruction of antiquities in Syria and Iraq has prompted a secretive organisation to track and restore looted artefacts, while another international group wants to virtually recreate heritage lost to theft and vandalism. 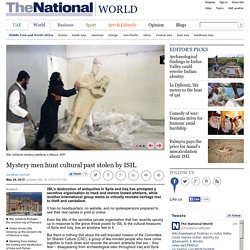 It has no headquarters, no website, and no spokespersons prepared to see their real names in print or online. Even the title of the secretive private organisation that has recently sprung up in response to the grave threat posed by ISIL to the cultural treasures of Syria and Iraq, has an anodyne feel to it. But there is nothing dull about the self-imposed mission of the Committee for Shared Culture (CSC), a group of like-minded people who have come together to track down and recover the ancient artefacts that are – they fear – disappearing from archaeological sites throughout Iraq and Syria every day. “I have to consider the safety of my family,” he says. New Eastern Outlook sur Twitter : "More Evidence of Israel’s Dirty Role in the Syrian Proxy War #Syria #Israel #Iraq. More Evidence of Israel’s Dirty Role in the Syrian Proxy War. Video footage surfaced last week showing the Israel Defense Forces (IDF) treating a wounded anti-Assad Syrian rebel, following a UN report at the end of last year which found that the IDF and the Syrian rebels (including ISIS) were in regular contact. 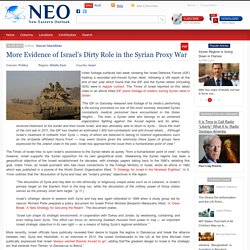 “George Herbert Walker Bush: ‘Sarah, if the American people ever find out what we have done, they would chase us down the street and lynch us.’ That is a famous 1992 quote by George Herbert Walker Bush to Sarah McLendon, a Texas journalist who Bush had kn. US ordered to release photos of army abuse of detainees. Is an Algerian ‘spring’ around the corner? The political situation in Algeria has taken a dangerous turn, portending difficult days for the regime. 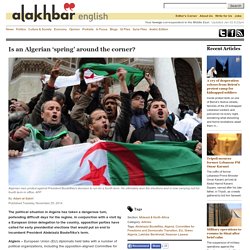 In conjunction with a visit by a European Union delegation to the country, opposition parties have called for early presidential elections that would put an end to incumbent President Abdelaziz Bouteflika’s term. Algiers – European Union (EU) diplomats held talks with a number of political organizations, including the opposition-aligned Committee for Freedoms and Democratic Transition. This has infuriated pro-government forces, which have accused the opposition of ‘treason,’ exacerbating tensions between the two sides. Image uploaded by @Faaz71. US Armed Rebels Gave TOW missiles to Al Qaeda. US supplied TOW anti-tank missiles have ended up in the hands of Jabhat Al Nusra, Syria’s branch of Al Qaeda. 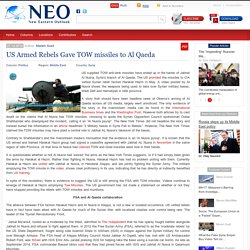 The US provided the missiles to CIA vetted Syrian rebel faction Harakat Hazm in May. A video posted by Al Nusra shows the weapons being used to take over Syrian military bases, Wadi Deif and Hamidiyeh in Idlib province. A story that should have been headline news of Obama’s arming of Al Qaeda across all US media, largely went unnoticed. The only evidence of the story in the mainstream media can be found in the International Business times and the Washington Post. However both articles try to cast doubt on the claims that Al Nusra has TOW missiles, choosing to quote the Syrian Opposition Council spokesman Oubai Shahbandar who downplayed the incident, calling it an “Al Nusra psyop”. Jean-Marc Mojon sur Twitter : "#Iraq says record 17 million Shiite pilgrims in #Karbala for Arbaeen. Iraq says record 17 million Shiite pilgrims in Karbala. By Ammar Karim Iraqi Defence Minister Khaled al-Obeidi said Thursday that the number of pilgrims in the city of Karbala for the annual Arbaeen commemoration had reached a record 17.5 million this year. 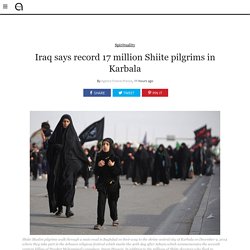 Arbaeen, which marks the end of the 40-day period of mourning after the anniversary of Imam Hussein’s death, is considered one of the largest religious gatherings in the world. “The number of Arab and foreign pilgrims has reached 4.5 million, of 60 different nationalities, the biggest contingent being Iranians,” he told reporters. 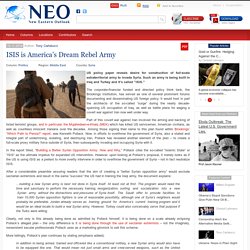 Such an army is being built in Iraq and Turkey and it’s called “ISIS.” The corporate-financier funded and directed policy think tank, the Brookings Institution, has served as one of several prominent forums documenting and disseminating US foreign policy. It would host in part the architects of the so-called “surge” during the nearly decade-spanning US occupation of Iraq, as well as battle plans for waging a covert war against Iran now well under way. Part of this covert war against Iran involved the arming and backing of listed terrorist groups, and in particular, the Mujahedeen-e-Khalq (MEK) which has killed US servicemen, American civilians, as well as countless innocent Iranians over the decades. Among those signing their name to this plan found within Brookings’ “Which Path to Persia?” …building a new Syrian army is best not done in Syria itself. US Sponsored Genocide Against Iraq 1990-2012. Killed 3.3 Million, Including 750,000 Children.

Approximately 3.3 million Iraqis, including 750,000 children, were “exterminated” by economic sanctions and/or illegal wars conducted by the U.S. and Great Britain between 1990 and 2012, an eminent international legal authority says. 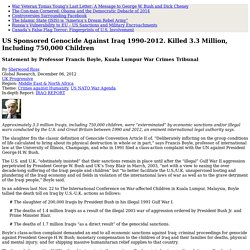 The slaughter fits the classic definition of Genocide Convention Article II of, “Deliberately inflicting on the group conditions of life calculated to bring about its physical destruction in whole or in part,” says Francis Boyle, professor of international law at the University of Illinois, Champaign, and who in 1991 filed a class-action complaint with the UN against President George H.W. Bush. The U.S. and U.K. “obstinately insisted” that their sanctions remain in place until after the “illegal” Gulf War II aggression perpetrated by President George W. Bush and UK’s Tony Blair in March, 2003, “not with a view to easing the over decade-long suffering of the Iraqi people and children” but “to better facilitate the U.S. Boyle noted that then U.S. Human Rights Watch accuses Israel of war crimes in Gaza. Videoplayer. Four Blackwater mercenaries found guilty of killing Iraqi civilians.

A federal jury in the United States on Wednesday found four former Blackwater security guards guilty of shootings of over 30 unarmed Iraqis in Baghdad in 2007. 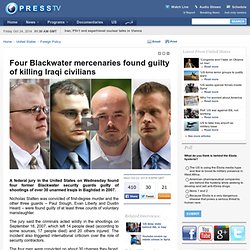 Nicholas Slatten was convicted of first-degree murder and the other three guards -- Paul Slough, Evan Liberty and Dustin Heard -- were found guilty of at least three counts of voluntary manslaughter. The jury said the criminals acted wildly in the shootings on September 16, 2007, which left 14 people dead (according to some sources, 17 people died) and 20 others injured.

By Scott Creighton “We’ve got Iraqi army battalions driving around in Toyota trucks,” General McCaffrey, 2007 This you have to see to believe: the now iconic white Toyota trucks we see ISIS™ driving around look scarily familiar to ones purchased here in the states and outfitted by special forces which puts to rest the notion that ISIS™ simply ran up to a dealership in Iraq and made off with 30 or so vehicles. They aren’t even SOLD in Iraq and certainly not with these modifications. The Powers Behind The Islamic State. France seeks international meeting to tackle ISIS. "We can no longer keep to the traditional debate of intervention or non-intervention," Hollande told Le Monde. "We have to come up with a global strategy to fight this group, which is structured, has significant financing, very sophisticated weapons and threatens countries like Iraq, Syria and Lebanon," he said.

France, which has close ties with Iraq's Kurdish regional government, started delivering weapons to Kurdish fighters Friday to help stop an advance by ISIS into the Kurdish region. "I believe the international situation is the worst we've seen since 2001," Hollande said. "We are not dealing with a terrorist group like Al-Qaeda, but a quasi-terrorist state, ISIS. " Speaking on French radio Tuesday, a Kurdish general said French weapons' deliveries so far had not been sophisticated enough and called on Paris to provide anti-tank missiles. Slavery, genital mutilation, collective marriage: False claims about ISIS. A fake photo of 'enslaved women in Mosul' circulating on social media networks. The savagery of ISIS jihadists rampaging through Syria and Iraq is already well known. Image uploaded by @Faaz71. ISIS militants blow up Prophet Jonas’ tomb in Iraq – video. Published time: July 25, 2014 20:11 People walk through the rubble of the Prophet Younis Mosque after it was destroyed in a bomb attack by militants of the Islamic State, formerly known as the Islamic State in Iraq and the Levant (ISIL) in the city of Mosul, July 24, 2014.

Iraq's Break Up is the Real "Mission Accomplished" - #NewWorldNextWeek. NATO’s Terror Hordes in Iraq a Pretext for Syria Invasion. All roads lead to Baghdad and the Islamic State in Iraq and Syria (ISIS) is following them all, north from Syria and Turkey to south. Bush and Blair Found Guilty of War Crimes Washington's Blog. Update: Since posting this, and despite many reports in Malaysian news sources which imply that this was an official tribunal, I have discovered that the tribunal does not carry any legal authority. Rather, it is an informal group organized by the former prime minister of Malaysia. As such, it is merely symbolic. Bush and Blair Convicted of War Crimes George W. Bush and Tony Blair have been found guilty of war crimes for committing crimes against humanity during the Iraq war. Granted, it was not the U.S., or England or any other Western country … but Malaysia.