Promoting Human Milk and Breastfeeding for the Very Low Birth Weight Infant. Cytomegalovirus (CMV) is a ubiquitous double-stranded DNA virus with which 60% to 70% of American women are infected before pregnancy.109 Most CMV immunoglobulin G–positive women shed the virus in breast milk during lactation. 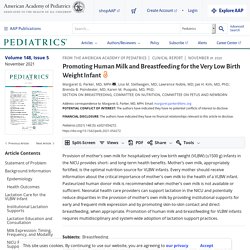 Mother’s own milk is the primary source of CMV transmission among term newborn infants, and nearly all term infants who acquire CMV during breastfeeding are infected without signs of illness.110 In contrast, postnatally acquired cytomegalovirus (pCMV) infection in preterm infants can be associated with a sepsis-like illness, increased morbidity, and, rarely, mortality.111–113 Manifestations of pCMV infection can include apnea, pneumonitis, leukopenia, thrombocytopenia, hepatitis, cholestasis, and colitis.114 Health care providers caring for VLBW infants fed mother’s own milk and presenting with signs suggestive of late-onset sepsis may consider CMV testing as well as evaluation for bacterial infection. 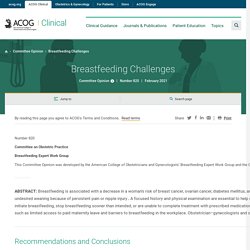 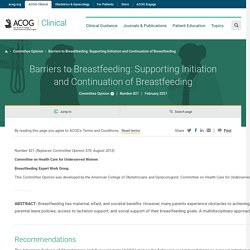 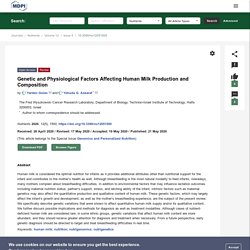 HMOs are thought to participate in numerous functions including metabolism, probiotic and prebiotic, antimicrobial, modulation of infant intestinal epithelial cell responses, immune response, nutritional effects, as well as brain development [70,115,116,117,118,119]. Like blood groups, the composition of HMOs depends on the expression of certain glycosyltransferases. On the basis of the secretor (Se) and Le blood group system, which is determined by the activity of two gene loci encoding for the α1-2-fucoslyltransferase FUT2 (encoded by the Se gene) and the α1-3/4-fucosyltransferase FUT3 (encoded by the Le gene), four milk groups were assigned: Le-positive secretors (Se+Le+), Le-negative secretors (Se+Le−), Le-positive non-secretors (Se−Le+), and Le-negative non-secretors (Se−Le−) [116].

Vegan or vegetarian diet and breast milk composition – a systematic review: Critical Reviews in Food Science and Nutrition: Vol 0, No 0. How does women’s bone health recover after lactation? A systematic review and meta-analysis. Drugs and Lactation Database (LactMed) TOXNET Home > LactMed LactMed A TOXNET DATABASE Drugs and Lactation Database (LactMed) About LactMed What is LactMed? 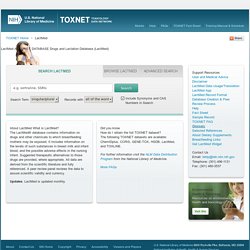 The LactMed® database contains information on drugs and other chemicals to which breastfeeding mothers may be exposed. Updates: LactMed is updated monthly. Did you know How do I obtain the full TOXNET dataset? Guideline: counselling of women to improve breastfeeding practices. Nutrition During Pregnancy, Lactation and Early Childhood and its Implications for Maternal and Long-Term Child Health: The Early Nutrition Project Recommendations - FullText - Annals of Nutrition and Metabolism 2019, Vol. 74, No. 2. 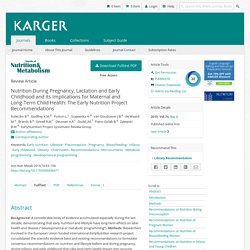 VegPlate: A Mediterranean-Based Food Guide for Italian Adult, Pregnant, and Lactating Vegetarians - Journal of the Academy of Nutrition and Dietetics. Optimizing Support for Breastfeeding as Part of Obstetric Practice - ACOG. Recommendations The American College of Obstetricians and Gynecologists makes the following recommendations: Education Clinical management of lactation is a core component of reproductive health care. 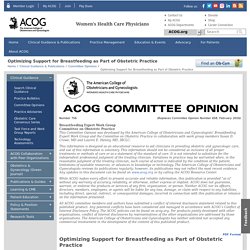 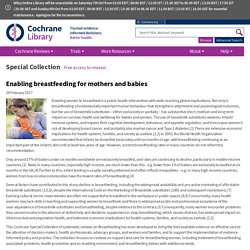 Optimal nutrition in lactating women and its effect on later health of offspring: A systematic review of current evidence and recommendations (EarlyNutrition project): Critical Reviews in Food Science and Nutrition: Vol 57, No 18. Long-chain polyunsaturated fatty acid supplementation during lactation The seven systematic reviews enclosed a total of 10 publications (describing outcomes of five randomized trials), including the three RCTs we identified. 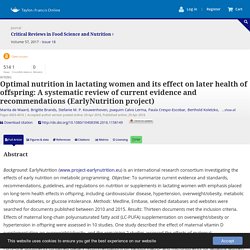 The remaining seven publications were published before the year 2010, and were therefore not individually identified by our search (Helland et al., 2001 Helland, I. B., Saugstad, O. D., Smith, L., Saarem, K., Solvoll, K., Ganes, T. and Drevon, C. A. (2001). The (updated) Cochrane review was the most recently published document and included all 10 publications. Position of the Academy of Nutrition and Dietetics: Promoting and Supporting Breastfeeding. For example, preterm infants are at increased risk of developing necrotizing enterocolitis compared with term infants, and human milk feedings reduce the incidence.9 Studies show an absolute difference of 5% in the risk of necrotizing enterocolitis when comparing outcomes between preterm infants receiving human milk or a substitute. 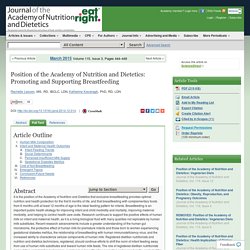 This is considered a meaningful clinical difference due to the high case-fatality rate of necrotizing enterocolitis.26 Milk from the infant’s own mother contains bioactive components and immunomodulatory factors, and is the first choice for feeding preterm infants.9, 29 Although mother’s own milk is desirable, donor milk is recommended when mother’s own milk is not available9, 29 (use of donor milk is expanded upon in the practice paper2). Infant Feeding Trends Social Determinants Perceived Insufficient Milk Supply Gestational Diabetes Mellitus. Guideline: Updates on HIV and Infant Feeding: The Duration of Breastfeeding, and Support from Health Services to Improve Feeding Practices Among Mothers Living with HIV - NCBI Bookshelf. Maternal Diet and Nutrient Requirements in Pregnancy and Breastfeeding. An Italian Consensus Document.

During pregnancy, micronutrient requirements increase more than those of macronutrients, and inadequate intakes (and, thus, a low nutritional quality of the diet) can have significant consequences for both the mother and the developing fetus. In particular, there is evidence to support the physiologic role played by selected minerals and vitamins [12,32]. 3.1. Iron Involved in numerous enzymatic processes, iron (the foremost constituent of hemoglobin, myoglobin and various enzymes) plays essential roles in the transfer of oxygen to tissues.

Iron deficiency causes anemia, a very common condition worldwide, affecting 22% of women of childbearing age in Europe and as much as 50% in developing countries [33]. Meat and fish, but also legumes and green leafy vegetables are the main dietary sources of iron. During pregnancy, iron requirement progressively increases until the third month, in parallel with the accumulation in fetal tissues. Table 2. 3.2. 3.3. 3.4. USPSTF Recommendation: Interventions to Support Breastfeeding. Importance There is convincing evidence that breastfeeding provides substantial health benefits for children. However, nearly half of all US mothers who initially breastfeed stop doing so by 6 months, and there are significant disparities in breastfeeding rates among younger mothers and in disadvantaged communities.