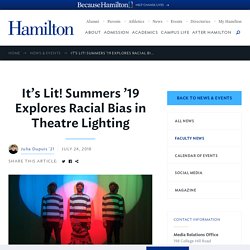 Burns, A Post Electric Play. While he was working on the lighting design for the performance, Summers became fascinated with the manipulation of light and color on set, particularly how it interacted with the different hues of the performers’ skin. “I was really interested in the way the amber and green gels interacted with the elaborate and colorful makeup used during the final act,” Summers said. “Specifically how it read differently on the actor with darker skin.” It was then that he decided to pursue his passion for light design with an Emerson Foundation grant.

UPDATED: Now in its third season, HBO’s “Insecure” became a critical hit not only because of its laugh-out-loud scenes and quotable moments, but for the nuanced and honest way the series portrayed the life and relationships of twentysomething black women, starring creator Issa Rae. 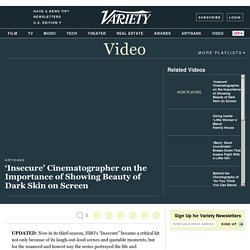 That’s precisely why when approaching the visual aesthetics, the show’s cinematographer, Patrick Cady, thought it was important to convey the layered storytelling. “The cinematography can show a little more depth than what’s happening in the scene and still serve what might be a punchline,” says Cady, who was brought in during Season 2. He credited “Insecure” DP Ava Berkofsky for establishing the look of the show. Exploration Of Lighting, Skin Tone, Skin Colour, Make Up And Costume – Photo Sociology. All of these photos are taken of the TV screen from my mobile. 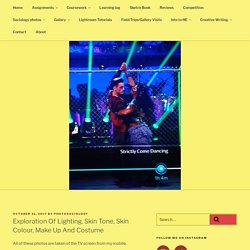 White Balance One of the things that I am most interested in is how lighting effects different skin colours. As a photographer, unless I am using lighting for a specific effect then I want the results of a photograph to match the skin colour of my model. Lighting affects different skin colours differently, and make up works differently as well. In the examples below, the first photo is the closets representation of the mans skin colour. Facial Up-lighting An interesting effect for a surreal/scary look, and also for highlighting certain features if the lighting is directed towards the features that you wish to highlight.

Coloured Lighting and Skin Green is my least favorite lighting colour. Theatrical Makeup This is something that I wish to make use of for the Painting with Light assignment. ‘Insecure’s Photography Director Ava Berkofsky Talks Lighting Black Faces – GEEKS OF COLOR. Even though we’re only halfway through the second season, HBO has already done the right thing and greenlighted the Issa Rae hit Insecure for a third season. 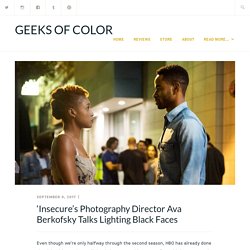 Back in 2016, before its premiere, Rae spoke about the show saying that it would, “examine the complexities of ‘blackness’ and the reality that you can’t escape being black. We’re just trying to convey that people of color are relatable. This is not a hood story. Skin Tone And Lighting Techniques: Fair & Balanced. Lighting fair-skinned subjects can be a challenge, but when working outdoors or indoors, controlling the flash, managing external illumination or simply shading the areas you don’t want highlighted can yield great results. 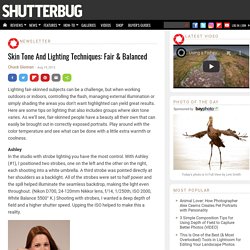 Here are some tips on lighting that also includes groups where skin tone varies. As we’ll see, fair-skinned people have a beauty all their own that can easily be brought out in correctly exposed portraits. Play around with the color temperature and see what can be done with a little extra warmth or coolness. Ashley In the studio with strobe lighting you have the most control. With Ashley (#1), I positioned two strobes, one on the left and the other on the right, each shooting into a white umbrella. . #1All Photos © Chuck Gloman Danielle Moving outdoors with Danielle, I selected a shady spot with the full intensity of the sun in the background (#2). Pete Pete has piercing blue eyes and skin that refuses to tan even under full sun. How 'Insecure' Plays to The Lighting of Dark Skin. The HBO show 'Insecure', which has a 100% rating on Rotten Tomatoes, is about two best friends who deal with their everyday insecurities in work, love, family, and friendship. 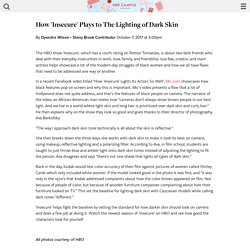 Issa Rae, creator, and main actress helps showcase a lot of the modern-day struggles of black women and how we all have flaws that need to be addressed one way or another. In a recent Facebook video titled "How 'Insecure' Lights Its Actors So Well", Mic.com showcases how black features pop on screen and why this is important. Mic's video presents a flaw that a lot of Hollywood does not quite address, and that's the features of black people on camera. The narrator of the video, an African-American man states how "cameras don't always show brown people in our best light.