How to remove specific version of installed package? · Issue #17558 · Homebrew/homebrew. Apple OS X: Remove a Symbolic Link (Symlink) Command. Getting started with Yeoman and generator-webapp. Yeoman - Modern workflows for modern webapps. In a traditional web development workflow, you would need to spend a lot of time setting up boilerplate code for your webapp, downloading dependencies, and manually creating your web folder structure. 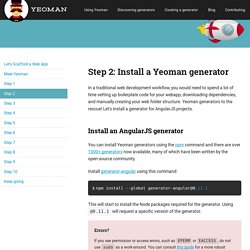 Errors? If you see permission or access errors, such as EPERM or EACCESS, do not use sudo as a work-around. How to Use Yeoman to Scaffold Your Next Web App. So you've decided to build your next groundbreaking web app, but you don't know where to start. 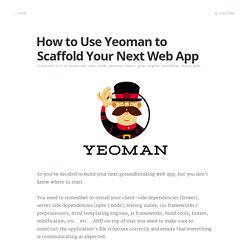 You need to remember to install your client-side dependencies (bower), server side dependencies (npm / node), testing suites, css frameworks / preprocessors, html templating engines, js frameworks, build tools, linters, minification, etc... etc... AND on top of that you need to make sure to construct the application's file structure correctly and ensure that everything is communicating as expected. Sounds like hours of unneccessary work / potential productivity time to me... A Beginner's Guide to npm — the Node Package Manager. Node.js makes it possible to write applications in JavaScript on the server. 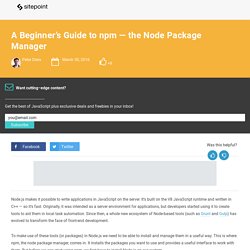 It’s built on the V8 JavaScript runtime and written in C++ — so it’s fast. Originally, it was intended as a server environment for applications, but developers started using it to create tools to aid them in local task automation. Since then, a whole new ecosystem of Node-based tools (such as Grunt and Gulp) has evolved to transform the face of front-end development. To make use of these tools (or packages) in Node.js we need to be able to install and manage them in a useful way. This is where npm, the node package manager, comes in. Installing Node.js Head to the Node.js download page and grab the version you need. For this tutorial we are going to use v.5.7.0 Stable.

Getting Started with Bower. There are now more libraries and frameworks available for front-end development than ever before. 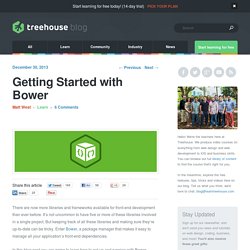 It’s not uncommon to have five or more of these libraries involved in a single project. But keeping track of all these libraries and making sure they’re up-to-date can be tricky. Enter Bower, a package manager that makes it easy to manage all your application’s front-end dependencies. In this blog post you are going to learn how to get up and running with Bower. You’ll start by installing the Bower command-line utility and then go on to learn about the various commands that are available for managing packages. Lets get started! Installing Bower Bower can be installed using npm, the Node package manager. Once you have npm installed, open up Terminal (or Command Prompt) and enter the following command: AngularJS Tools: Tutorial for Scaffolding, Testing & More. Introduction With the many tools available to aid in developing AngularJS applications, many people have the impression that it’s an extremely complicated framework, which is not at all the case. 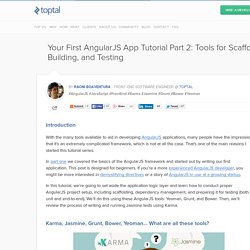 That’s one of the main reasons I started this tutorial series. In part one we covered the basics of the AngularJS framework and started out by writing our first application. This post is designed for beginners. If you’re a more experienced AngularJS developer, you might be more interested in demystifying directives or a story of AngularJS in use at a growing startup. In this tutorial, we’re going to set aside the application logic layer and learn how to conduct proper AngularJS project setup, including scaffolding, dependency management, and preparing it for testing (both unit and end-to-end).

Karma, Jasmine, Grunt, Bower, Yeoman… What are all these tools? If you work with JavaScript, it’s highly probable that you already know of at least some of these tools, even if you’re new to Angular. Yeoman/generator-webapp. Yeoman/yo. Getting started with Yeoman. The Yeoman workflow is comprised of three core tools for improving your productivity and satisfaction when building a web app. 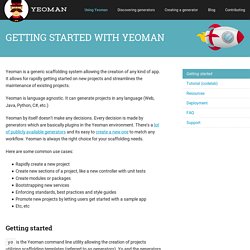 These tools are: yo - the scaffolding tool from Yeoman A package manager, such as bower or npm. A build tool, such as Grunt or Gulp. Each of these projects are independently maintained by their respective communities, but work well together as a part of a prescriptive workflow for keeping you effective. Let’s walk through what these binaries can do. yo Yo is maintained by the Yeoman project and offers web application scaffolding, utilizing scaffolding templates we refer to as generators. Installing yo and some generators First, you'll need to install yo and other required tools: