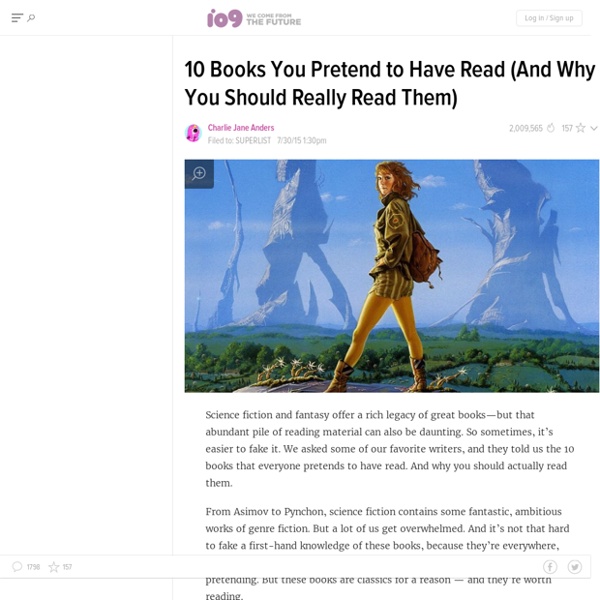 Gravity's Rainbow is SF? Infinite Jest is not SF and neither is Jonathan Strange & Mr. Norrell (I gave this to a person I didn't much like for Xmas one year). Aside from those I've read all except Starmaker (started it recently but couldn't finish it. I loved LaFM when I read it years ago but now I'm too scared to revisit it), The Long Tomorrow (had not heard of it until now) and Dhalgren (couldn't finish it). Dune I've read three times, mostly to confirm my initial opinion - it's the most overrated SF novel of all time. My biggest 'never read' SF (until about eight years ago anyway) was probably Neuromancer; which I blame on several misleading blurbs and descriptions I'd read about it over the years.

Here Are the 1960s Science Fiction Novels Everyone Should Read Personally, I think it's an age thing, and society's evolving view of Nazis. The novel was published less than 20 years after WWII, and post-war nostalgia and pop culture was all about the US kicking some Nazi butt. Dick's alternate world where the Axis won was an interesting but unimaginable thought experiment for adults of the 60s. Then Vietnam happened, and war wasn't cool any more, and WWII was our parents war. So the media turned the Nazis into clowns and buffoons with Hogan's Heroes and Raiders of the Lost Ark. Dick's novel was still a good read, but the edge was off for readers after Vietnam, Rhodesia, Granada, Nicaragua, etc.

Erotic Fiction by Remittance Girl Coming Together Presents: Remittance Girl This is my first ever collection of 17 short stories in a single book. It was edited by Lisabet Sarai and published by Alessia Brio under the Coming Together banner.The anthology contains the following stories: Motorcycle Hug, Dark Garden, Penny Red, River Mother, Therapy, The Spy Who Loved His Wife, The Night I was Mel Torme, The Pipe of Thorns, Grown-Up Games, Butoh-Ka, Object of Pleasure, Pattern Passion, Bequeathed, The Other Side, Shellshock, The Baptism, Souvenir. All proceeds for the book go to support free speech through the auspices of the American Civil Liberties Union (ACLU). 10 great science fiction novels that have been banned @djscruffy: And that's why you're a heathen and should be burned at the stake. @djscruffy: In defense of public schools, I would suggest that the reason many of these books are challenged so often is that they're frequently included in school curriculums and libraries. I grew up in a state that, according to these links, engaged in book-burning less than a decade before my birth. That makes me shudder. But I'm also the child of a public school teacher and am familiar with my mother's and many of her peers' views on children's reading materials. Despite the generally conservative views in my community, my elementary school encouraged me to read A Wrinkle in Time and The Giver and Are You There God, It's Me, Margaret.

The best way to convert PDFs to Kindle format PDF is probably the most popular digital file format on the planet. When it comes to digital publications, it’s definitely the most commonly used format of all. That’s why there is no shortage of great readers that you can use for viewing PDFs on your desktop computer. There’s also great PDF readers available for all types of mobile devices, of both the Android and iOS varieties. However, there is one very popular e-reader that does not fully support PDFs. It is Amazon’s Kindle.

Metropolis: A Rare Film Programme for Fraitz Lang's 1927 Masterpiece Original programme for the British premiere of Fritz Lang’s Metropolis in 1927. The world’s most valuable movie poster, for Fritz Lang’s 1927 masterpiece Metropolis, is to be auctioned again after making a record $690,000 in 2005. Ephemera related to the film is notoriously scarce, with only four copies of the poster known to survive. Almost as uncommon is this amazing film programme produced for the London premiere at the Marble Arch Pavilion on March 21, 1927, one of only three copies that we have handled.

Isaac Asimov - The Last Question The last question was asked for the first time, half in jest, on May 21, 2061, at a time when humanity first stepped into the light. The question came about as a result of a five dollar bet over highballs, and it happened this way: Alexander Adell and Bertram Lupov were two of the faithful attendants of Multivac. As well as any human beings could, they knew what lay behind the cold, clicking, flashing face — miles and miles of face — of that giant computer. 614 Sq. Ft. SOLETA Zero Energy One Tiny Home If you like tiny homes on foundations then the SOLETA might interest you. It’s a zero energy tiny house created by Catalin Butmalai of the Justin Capra Foundation for Invention in Romania. The house is on display at the United States Embassy in Bucharest. Not only does it power itself thanks to solar and wind, but it can also be managed with your smartphone. It’s 48 square meters downstairs and 9 square meters up in the loft.

The Victorian Hugos: 1891 SExpand For anybody curious, the title image may be from somebody's flickr... but it's a picture (or copy) of "The Picture of Dorian Grey" by Ivan Albright. I remember stumbling upon that painting at the Art Institute in Chicago.