Want to Make Difficult Conversations Easy? Try This 1 Counterintuitive Trick, According to Psychology. No one looks forward to a difficult conversation, whether it's with a troubling co-worker, a toxic boss, family, friends, or anyone else. 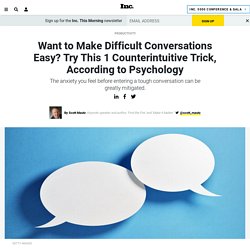 #256: Joseph Grenny—Hard Talks Made Easier. 4 Simple Words That Stop Nasty Behavior at Work. When you think someone is handing you a bunch of baloney, or worse yet, plagiarizing your hard work, or even worse yet, using up all the air time in a meeting, how do you face them head on without losing your cool? 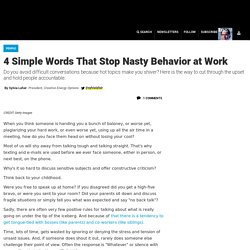 Most of us will shy away from talking tough and talking straight. That's why texting and e-mails are used before we ever face someone, either in person, or next best, on the phone. Why's it so hard to discuss sensitive subjects and offer constructive criticism? How to paraphrase effortlessly so you can gain clarity from every conversation! Paraphrasing - A key communication skill. 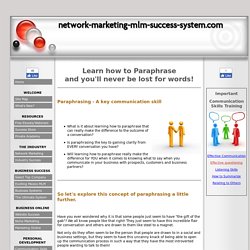 7 Smart Reasons You Should Talk Less and Listen More. How to Handle Difficult Conversations at Work. Difficult conversations — whether you’re telling a client the project is delayed or presiding over an unenthusiastic performance review — are an inevitable part of management. 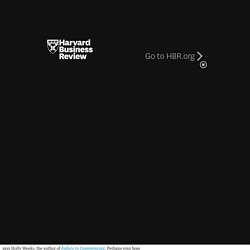 How should you prepare for this kind of discussion? How do you find the right words in the moment? And, how can you manage the exchange so that it goes as smoothly as possible? What the Experts Say “We’ve all had bad experiences with these kind of conversations in the past,” says Holly Weeks, the author of Failure to Communicate. Perhaps your boss lashed out at you during a heated discussion; or your direct report started to cry during a performance review; maybe your client hung up the phone on you. Empathy in Leadership: Coaching Leaders to Manage Their Stories. When leaders struggle with staff morale or direct reports failing to thrive, a lack of empathy is the lead domino. 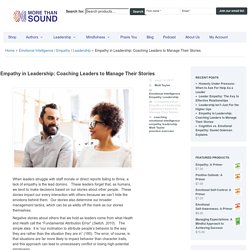 These leaders forget that, as humans, we tend to make decisions based on our stories about other people. These stories impact our every interaction with others because we can’t hide the emotions behind them. Our stories also determine our broader management tactics, which can be as wildly off the mark as our stories themselves. Negative stories about others that we hold as leaders come from what Heath and Heath call the “Fundamental Attribution Error” (Switch, 2010). Difficult Conversations: 9 Common Mistakes. Mistake #1: We fall into a combat mentality. 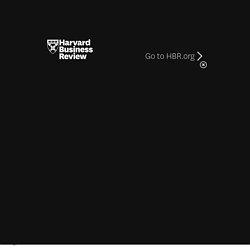 When difficult conversations turn toxic, it’s often because we’ve made a key mistake: we’ve fallen into a combat mentality. This allows the conversation to become a zero-sum game, with a winner and a loser. But the reality is, when we let conversations take on this tenor – especially at the office – everyone looks bad, and everyone loses. The real enemy is not your conversational counterpart, but the combat mentality itself. CC1 Lab SC. 8 Easy Tips for Crucial Conversations. American's fear of medical errors is justified. 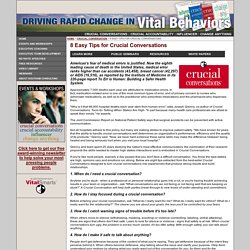 Now the eighth leading cause of death in the United States, medical error ranks higher than car accidents (43,458), breast cancer (42,297) or AIDS (16,516), as reported by the Institute of Medicine in its 220-page report To Err is Human: Building a Safer Health System. Level3change. Crucial Conversation Silence Kills. By Joseph Grenny What do Columbia, HealthSouth, New York Times, Enron, Tyco, Worldcom, Duke University, and Baylor University Hospital all have in common? 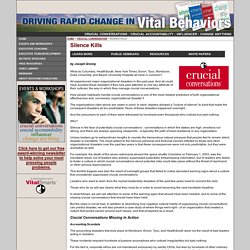 And the precursors to each of them were witnessed by hundreds-even thousands-who noticed but said nothing. Why? Silence in the face of potentially crucial conversations - conversations in which the stakes are high, emotions run strong, and there are sharply opposing viewpoints - is typically the path of least resistance in any organization. But the news is not all bad. Silent Danger SC. Crucial Skills. On December first, 1969, my wife and I sat glued to the radio. 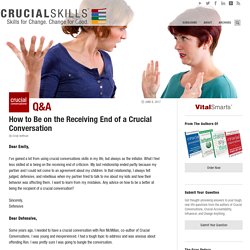 What event had us so interested? The reading of calendar dates. The radio announcer who had our attention was drawing pill-shaped capsules from a large, glass vessel. Each of the 366 capsules contained a piece of paper inscribed with a day of the year. Men, aged 19 to 25, who were born on the date contained in the first capsule drawn would be the first to be drafted into the US military. Pundits speculated that military leaders would call to active duty the first 200 dates announced over the radio. “March 30th,” the announcer flatly announced.

As my senior year of college hurried along, the country’s need for soldiers increased, and the number 217 started to look increasingly shaky. “Are you about to graduate?” I had never considered joining the Coast Guard, and becoming an officer was far from a sure thing. "We Need to Talk" - How to Start a Difficult Conversation (STATE, SWH) Master My Stories-Video- People Are Like Garbage Trucks. Master My Stories-Video: Remember this story before you judge...