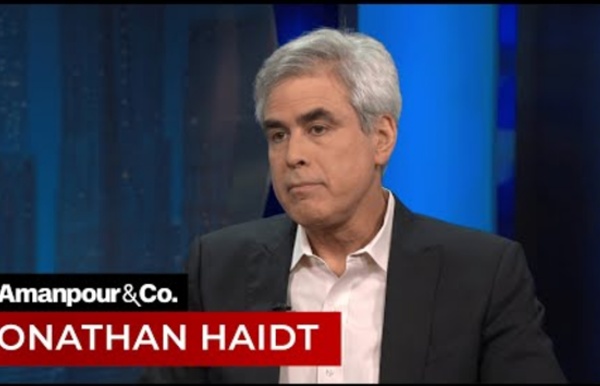 Related:  How it works • World View • think • Contemporary History • How Can We Talk? About What Is Essential?

Trump's Labor Secretary is Reaching Cartoonish Levels of Supervillainry – BillMoyers.com Trump’s Labor Secretary is Reaching Cartoonish Levels of Supervillainry A board on the trading floor of the New York Stock Exchange shows the Standard & Poor's numbers, Tuesday, Feb. 5, 2013. The U.S. government has filed civil charges against Standard & Poor's Ratings Services for improperly giving high ratings to toxic mortgage bonds before the financial crisis. (AP Photo/Richard Drew) This post originally appeared on Jacobin. Is This 'I'm Sorry I'm Late. I Had a Lot To Learn' Protest Sign Real? Rumors are surging in the wake of George Floyd’s death and resulting protests against police violence and racial injustice in the United States. Stay informed. Read our special coverage, contribute to support our mission, and submit any tips or claims you see here.

Smile! Could the pandemic lead to happier times? In January 2018, a Yale University professor named Laurie Santos launched a course, Psychology and the Good Life, which quickly became the most popular class in the institution’s 319-year-history. After 13 years at Yale, in 2016, the 44-year-old had taken charge of one of the university’s residential colleges and had become alarmed by widespread mental illness and stress. She wanted to explain the paradox of why so many students were still suffering, having achieved their dreams of being admitted to Yale and having met society’s definition of success. Santos created the lecture series in a bid to teach her students what really mattered – to help them carve out lives of meaning and contentment. Within a few days of the course’s launch, roughly a quarter of Yale’s entire undergraduate population had signed up. A few months later, in March 2018, Santos launched a 10-week online version of the original happiness course that anyone could access.

Overlooked No More: Brad Lomax, a Bridge Between Civil Rights Movements Alabama in 1963 was an epicenter of the civil rights movement, with lunch counter sit-ins, protest marches and other actions aimed at dismantling state-sponsored segregation. There, for the first time, Brad encountered signs designating some public spaces for white people and some for Black people. After graduating from Benjamin Franklin High School in Philadelphia in 1968, Lomax considered joining the military, but as the war in Vietnam raged, with Black soldiers bearing a disproportionate share of the burden, he decided instead to attend Howard University in Washington. That year — inexplicably, it seemed — Lomax began falling as he walked. Then he learned that he had multiple sclerosis.

Bully, coward, victim? Inside the sinister world of Trump mentor Roy Cohn Back in 2004, with the documentary Heir to an Execution, Ivy Meeropol began the decades-spanning project of exorcising the demon haunting her family. The Academy-shortlisted film sheds some light on the dark heritage of the Meeropol kids, descended as they are from Julius and Ethel Rosenberg, the couple executed by the United States government in 1953 having been convicted of sharing military secrets with the Soviet Union. When not teaching as an economics professor, Ivy’s father Michael spent most of his adult life on a crusade to restore and advocate for the reputation of his late parents, after years of defamation from the sinister prosecutor in the case Roy Cohn. Ivy’s film-making brought some elusive semblance of closure to this process – until, that is, early November 2016.

Purdue Pharma, others could deduct opioid settlements from taxes The data shows that substance use disorder is still widespread, but innovations in treatment, prescribing and awareness are helping. USA TODAY When Oklahoma Attorney General Mike Hunter announced in March that Purdue Pharma would pay the state $270 million to settle a lawsuit linked to the opioid epidemic, he declared the agreement "begins a new chapter for those struggling with addiction." The deal also appears to be part of the latest chapter in a saga where U.S. corporations trim their tax bills by writing lawsuit settlements off on their taxes.

A field guide to Trump's dangerous rhetoric All leaders are demagogues. You may not realize this, because we’ve come to associate the word “demagogue” with only dangerous populist leaders. But in Greek, the word just means “leader of the people” (dēmos “the people” + agōgos “leading”). Some demagogues are good, and some are dangerous. The fundamental difference between leaders who are good demagogues and leaders who are dangerous demagogues is found in the answer to this simple question: Are they accountable for their words and actions? Obviously, an unaccountable leader is dangerous in any political community. The Stock Market Is Near Correction Levels What if I told you the fastest stock market recovery in history is just a misunderstanding? You’ve probably seen headlines like this one: Or this one:

untitled As the coronavirus pandemic continues to spread throughout the U.S. despite mask mandates and social distancing measures, more than 150 medical experts, scientists and other health professionals signed a letter organized by a prominent consumer group and delivered to government leaders Thursday calling for new shutdowns to bring case counts down and “hit the reset button” to implement a more effective response. The letter, which was organized by consumer group U.S. PIRG and sent to the Trump administration, congressional leaders and state governors, urges leaders to “shut it down now and start over,” saying the government must “take bold action to save lives.” The signatories call for closing all non-essential businesses and opening restaurants for takeout only, with Americans leaving their houses “only to get food and medicine or to exercise and get fresh air.”

How dangerous is Jordan B Peterson, the rightwing professor who 'hit a hornets' nest'? The Canadian psychology professor and culture warrior Jordan B Peterson could not have hoped for better publicity than his recent encounter with Cathy Newman on Channel 4 News. The more Newman inaccurately paraphrased his beliefs and betrayed her irritation, the better Peterson came across. The whole performance, which has since been viewed more than 6m times on YouTube and was described by excitable Fox News host Tucker Carlson as “one of the great interviews of all time”, bolstered Peterson’s preferred image as the coolly rational man of science facing down the hysteria of political correctness. As he told Newman in his distinctive, constricted voice, which he has compared to that of Kermit the Frog: “I choose my words very, very carefully.”

It’s true: millions in dark money has been spent to tilt courts right After the Supreme Court agreed this term to hear a Second Amendment case brought by an NRA affiliate, several Senate Democrats cried foul. To influence the court’s composition, Whitehouse said, a combined $34 million in "dark money" went toward both blocking President Barack Obama’s Supreme Court nominee Merrick Garland and confirming President Donald Trump’s two Supreme Court picks, Justices Neil Gorsuch and Brett Kavanaugh. In a follow-up to the legal brief, Whitehouse in a Sept. 6 Washington Post op-ed described the money as follows: "One unnamed donor gave $17 million to the (Leonard) Leo-affiliated Judicial Crisis Network to block the nomination of Judge Merrick Garland and to support Gorsuch; then a donor — perhaps the same one — gave another $17 million to prop up Kavanaugh." It can be difficult to trace the path of anonymous political spending with precision, and we wanted to know the factual basis for Whitehouse’s claim. ‘A network of interlocking nonprofits’

Republicans will replace RBG but Democrats hold the trump cards – no, really In 2005, while bragging about his history of sexual assault, a reality TV host laid out a simple theory of power. “When you’re a star,” Donald Trump explained to Access Hollywood host Billy Bush, “they let you do it.” Fifteen years later, Trump has gone from The Apprentice to the Oval Office, from grabbing women without their consent to picking a woman to replace Ruth Bader Ginsburg on the supreme court. Yet his approach to power has remained quite consistent. “When you have the Senate, when you have the votes, you can sort of do what you want,” he told Fox & Friends. Does the coronavirus pandemic make someone who is disabled like me expendable? It is a strange time to be alive as an Asian American disabled person who uses a ventilator. The coronavirus pandemic in the United States has disrupted and destabilized individual lives and institutions. For many disabled, sick, and immunocompromised people like myself, we have always lived with uncertainty and are skilled in adapting to hostile circumstances in a world that was never designed for us in the first place. Want to avoid touching door handles by hitting the automatic door opener with your elbow?

untitled Key Points: With just a few weeks remaining before schools in the U.S. are scheduled to reopen, and the federal government encouraging in-person schooling, there remain many questions about the risk COVID-19 poses to children and their role in transmission of the disease. Indeed, other countries have not reopened schools with the levels of community transmission found in the U.S., coupled with its insufficient testing and limited contact tracing.Our review of the latest available data indicates that, while children who are infected with COVID-19 are more likely to be asymptomatic and less likely to experience severe disease (though a small subset become quite sick), they are capable of transmitting to both children and adults.What remains unclear and where evidence is still needed is: whether children are less likely to be infected than adults and, when infected, the frequency and extent of their transmission to others.