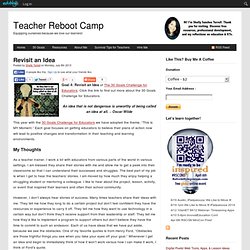 Click the link to find out more about the 30 Goals Challenge for Educators. An idea that is not dangerous is unworthy of being called an idea at all. ~ Oscar Wilde This year with the 30 Goals Challenge for Educators we have adopted the theme, “This is MY Moment.” Each goal focuses on getting educators to believe their plans of action now will lead to positive changes and transformation in their teaching and learning environments. My Thoughts As a teacher trainer, I work a lot with educators from various parts of the world in various settings. However, I don’t always hear stories of success. Our greatest achievements and accomplishments only came about due to action. Goal Short-term- For goal 4, revisit an idea you discarded. Thanks to Jake Duncan, @DuncanBilingual, for suggesting this cool collaborative tool, Mural.ly. 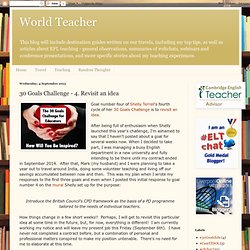 When I decided to take part, I was managing a busy English department in a new university and fully intending to be there until my contract ended in September 2014. After that, Mark (my husband) and I were planning to take a year out to travel around India, doing some volunteer teaching and living off our savings accumulated between now and then.

Goal 4 : Revisit an Idea#30goalsedu. ” My mind contains many good ideas,but it’s not always easy to squeeze one out ” ( Ashleigh Brilliant) 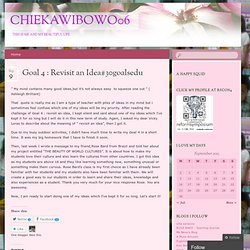 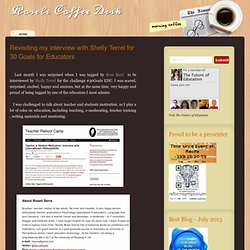 I was scared, surprised, excited, happy and anxious, but at the same time, very happy and proud of being tagged by one of the educators I most admire. I was challenged to talk about teacher and students motivation. as I play a lot of roles on education, including teaching, e-moderating, teacher training , writing materials and mentoring. As I stated in my other post about Defining my moment, I was introduced to a brave new world of education , involving new approaches , technologies and a huge PLN on the second semester last year (2012), when I had big changes in my life.

The turning point was the IATEFL in Liverpool in April . There I met in person lots of people from my PLN such as Shelly Terrel, Malu Sciamarelli , Carla Arena and Dimitris Primalis, among other great people who inspired and still inspire me. #30GoalsEdu: Goal 4 Revisit an Idea. Ideas are often thought of and forgotten in a blink of an eye. 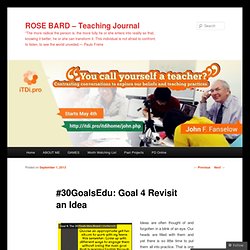 Our heads are filled with them and yet there is so little time to put them all into practice. That is one of the reasons why I left this one idea aside for while. Learners though love watching TV series in class, so I thought why not pursue this goal and see what would happen if I used it for a whole semester! Would they be more motivated?

Would they like the one I chose? The biggest challenge is developing tasks that don’t kill the natural desire and curiosity that keeps one engaged with a TV series, that is, the story itself. So I chose THE MIDDLE after a long search and review reading. A family that could pretty much be yours. ;) Back in April, I watched the live transmition of Jan Blake plenary “They don’t care about the vocabulary, they care about the characters.” and that has sticked to my mind every since. Episode 1 Before watching, I told them we would play a game called “Whose line is it?” Whose line is it? Things to Try from my MA program : English Advantage. 30 Goals Challenge - Goal 4. I have participated in the 30 Goals Challenge hosted by Shelly Sanchez Terrell before. 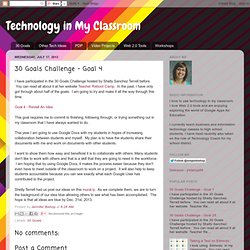 You can read all about it at her website Teacher Reboot Camp. In the past, I have only got through about half of the goals. I am going to try and make it all the way through this time. Goal 4 - Revisit An Idea This goal requires me to commit to finishing, following through, or trying something out in my classroom that I have always wanted to do. This year I am going to use Google Docs with my students in hopes of increasing collaboration between students and myself. I want to show them how easy and beneficial it is to collaborate with others. Shelly Terrell had us post our ideas on this mural.ly. Revisiting An Old Idea – Goal 4 #30 GoalsEdu.

GOAL4# 30 GoalsEdu This has been my toughest assignment so far because I am so busy with present ideas. 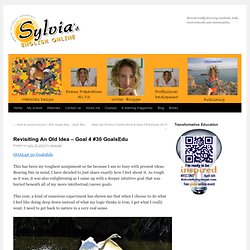