Teaching 'E-learning and Digital Cultures' Edcmooc" Is Google Making Us Stupid? - Nicholas Carr. TELtaster.pdf. H-: Wrestling with Transhumanism. Transhumanist Declaration. Humanity stands to be profoundly affected by science and technology in the future. 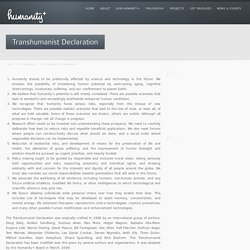 We envision the possibility of broadening human potential by overcoming aging, cognitive shortcomings, involuntary suffering, and our confinement to planet Earth.We believe that humanity’s potential is still mostly unrealized. There are possible scenarios that lead to wonderful and exceedingly worthwhile enhanced human conditions.We recognize that humanity faces serious risks, especially from the misuse of new technologies. 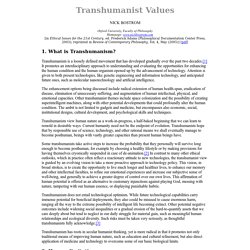 YouTube. TRUE SKIN. YouTube. Robbie - A Short Film By Neil Harvey. The Human Touch. In 1922 Thomas Edison proclaimed, “I believe the motion picture is destined to revolutionize our educational system and that in a few years it will supplant largely, if not entirely, the use of textbooks.” 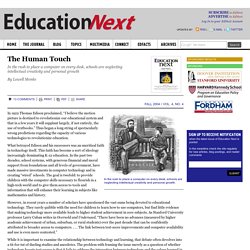 Thus began a long string of spectacularly wrong predictions regarding the capacity of various technologies to revolutionize education. What betrayed Edison and his successors was an uncritical faith in technology itself. This faith has become a sort of ideology increasingly dominating K-12 education. In the past two decades, school systems, with generous financial and moral support from foundations and all levels of government, have made massive investments in computer technology and in creating “wired” schools. The goal is twofold: to provide children with the computer skills necessary to flourish in a high-tech world and to give them access to tools and information that will enhance their learning in subjects like mathematics and history. 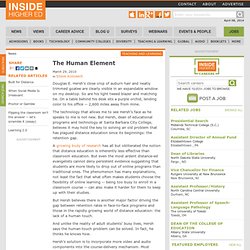 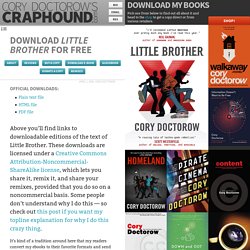 These downloads are licensed under a Creative Commons Attribution-Noncommercial-ShareAlike license, which lets you share it, remix it, and share your remixes, provided that you do so on a noncommercial basis. YouTube. The Crisis in Higher Education. A hundred years ago, higher education seemed on the verge of a technological revolution. 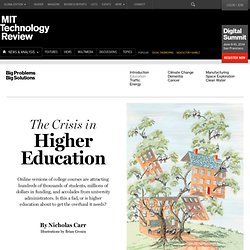 Elite education for the masses. They included Patrycja Jablonska in Poland, Ephraim Baron in California, Mohammad Hijazi in Lebanon and many others far from Baltimore who ordinarily would not have a chance to study at the elite Johns Hopkins Bloomberg School of Public Health. 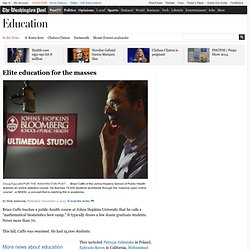 They logged on to a Web site called Coursera and signed up. They paid nothing for it. Openness, the double bind, and ecologies of yearning. » EdTech@VCCS. I’ve seen my share of conference keynotes, some tedious, some exhilarating, many forgettable. 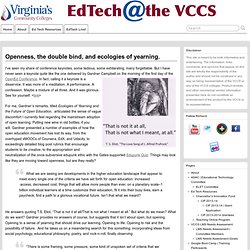 But I have never seen a keynote quite like the one delivered by Gardner Campbell on the morning of the first day of the OpenEd Conference. The Ecologies of Yearning #opened12 (with image, tweets) · audreywatters. Ecology of ideas -- Bateson Bateson's Hierarchy of Learning Zero learning: "receipt of signal. 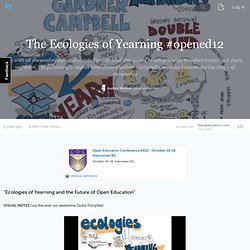 " No error possible. YouTube. Essay critiques the ideas of Clay Shirky and others advocating higher ed disruption. Clay Shirky is a big thinker, and I read him because he’s consistently worth reading. 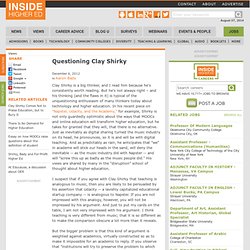 » Napster, Udacity, and the Academy Clay Shirky. Fifteen years ago, a research group called The Fraunhofer Institute announced a new digital format for compressing movie files. This wasn’t a terribly momentous invention, but it did have one interesting side effect: Fraunhofer also had to figure out how to compress the soundtrack.

The result was the Motion Picture Experts Group Format 1, Audio Layer III, a format you know and love, though only by its acronym, MP3. The recording industry concluded this new audio format would be no threat, because quality mattered most. Who would listen to an MP3 when they could buy a better-sounding CD at the record store? Then Napster launched, and quickly became the fastest-growing piece of software in history. If Napster had only been about free access, control of legal distribution of music would then have returned the record labels. How did the recording industry win the battle but lose the war? Johnston. YouTube. Sight. Productivity Future Vision. YouTube. Social Media Monitoring, Analytics and Alerts Dashboard. NEWMEDIA.

YouTube. Technological Determinism. E-learning and Digital Cultures. YouTube. Noble. In recent years changes in universities, especially in North America, show that we have entered a new era in higher education, one which is rapidly drawing the halls of academe into the age of automation. Automation — the distribution of digitized course material online, without the participation of professors who develop such material — is often justified as an inevitable part of the new “knowledge–based” society. It is assumed to improve learning and increase wider access. In practice, however, such automation is often coercive in nature — being forced upon professors as well as students — with commercial interests in mind. This paper argues that the trend towards automation of higher education as implemented in North American universities today is a battle between students and professors on one side, and university administrations and companies with “educational products” to sell on the other.

Technology is the Answer: What was the Question? -: UNESCO Education. Education is one of UNESCO’s principal fields of activities. Since its creation in 1945, the Organization has worked to improve education worldwide believing it to be key to social and economic development. The Organization aims to help build a sustainable world with just societies that value knowledge, promote peace, celebrate diversity and defend human rights, achieved by providing Education for All (EFA). Its close links with education ministries and other partners in 193 countries place UNESCO in a key position to press for action and change. The Education Sector comprises some 400 staff members worldwide.