What Is the Bystander Effect? The Kitty Genovese Case. If you witnessed an emergency happening right before your eyes, you would certainly take some sort of action to help the person in trouble, right?

While we might all like to believe that this is true, psychologists suggest that whether or not you intervene might depend upon the number of other witnesses present. What Is the Bystander Effect? The term bystander effect refers to the phenomenon in which the greater the number of people present, the less likely people are to help a person in distress. When an emergency situation occurs, observers are more likely to take action if there are few or no other witnesses. Being part of a large crowd makes it so no single person has to take responsibility for an action (or inaction). In a series of classic studies, researchers Bibb Latané and John Darley found that the amount of time it takes the participant to take action and seek help varies depending on how many other observers are in the room. Statistics by PennState University. Diffusion of responsibility. Diffusion of Responsibility and Bystander Effect. Social Influence. Social Roles and Bystander Apathy – Psychology.

Social Roles Gradually it was disclosed to me that the line separating good and evil passes not between states nor between social classes nor between political parties, but right through every human heart, through all human hearts. 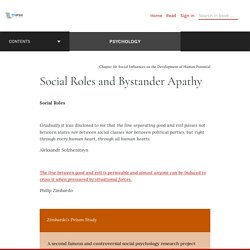 Aleksandr Solzhenitsyn The line between good and evil is permeable and almost anyone can be induced to cross it when pressured by situational forces. Philip Zimbardo A second famous and controversial social psychology research project demonstrating the power of the situation over the power of the person was conducted by Philip Zimbardo. Newspaper advertisements offered male college students money to participate in an all day, two-week study taking place before the beginning of the fall semester. The study began for the nine original “prisoners” with a surprise arrest in their homes! Whereas the first day was relatively calm, on the second day several of the prisoners started to rebel. Zimbardo personally conducted debriefing sessions. Video. The bystander effect is being made worse by people filming violent events on their smartphones.

On April 9, 2017, a video of a man being dragged off a United Airlines flight was posted on the internet and went viral.

But I don’t need to tell you that. Each of your most outspoken Facebook friends probably posted about the event, highlighting the aspects of it that best reinforced their worldview. The incident was covered all over American media and even sparked outrage in China. The collective focus may have now moved on to its next source of outrage, but there was something that only a few people noticed in the moment: a plane full of quiet passengers.

Other than one woman screaming, hardly anyone else on the plane seemed bothered enough by what was happening to raise a ruckus. Instead of intervening in the assault, the passengers stoically took out their cameraphones and pointed them toward David Dao, whose body was dragged along the aisle of the airplane, glasses askew, face bloody, and belly exposed. Breakdown of the United Airlines case. The Bystander Effect and Why You're a Horrible Person. Someone else will help him! Be The change. Take action! The good in us all: Empathy and courage. 5 Effective Tips to Overcome the Bystander Effect.

Do you know about the bystander effect?

It's a social dynamic that affects almost everyone when an observed conflict is either ignored or worse, reinforced by the failure to act by those observing. An example of this would be a number of people in a park observing a man trying to take a woman's purse, yet doing nothing to report the crime or to deter the criminal by drawing attention to their actions. The sad fact is that most of us are vulnerable to this condition of non-action; but fortunately, there are things you can do to negate or minimize the impact. Here are a few tips for overcoming the bystander effect. 1. People tend to take action more often when they feel that someone is more worthy of their attention. The lesson to take from this is: when you are not taking any sort of action to be helpful, consider your reasons carefully. 2.

That's right. 3. 4. Many times, people want to do something but they feign indifference in the belief that someone else will step in. 5. Final Thoughts.