Atomically Thin Material Generates Electricity - The Epoch Times. Engineers have demonstrated that a single atomic layer of molybdenum disulfide (MoS2) can generate an electrical voltage when it’s stretched or compressed. 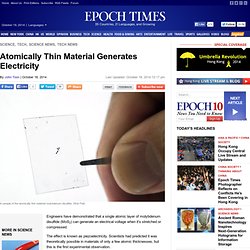 The effect is known as piezoelectricity. Scientists had predicted it was theoretically possible in materials of only a few atomic thicknesses, but this is the first experimental observation. The material could be the basis for unique electric generators that are lightweight, bendable, stretchable—and ultimately wearable. Graphene For Smartphones. Cars of the Future Could Be Powered by Their Bodywork – per forms. Researchers from Imperial College London and their European partners, including Volvo Car Corporation, are developing a prototype material which can store and discharge electrical energy and which is also strong and lightweight enough to be used for car parts. 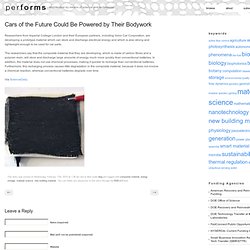 Furthermore, this recharging process causes little degradation in the composite material, because it does not involve a chemical reaction, whereas conventional batteries degrade over time. Volvo Car Group makes conventional batteries a thing of the past - Volvo Car Group Global Media Newsroom. By Harnessing Friction Between Surfaces, Triboelectric Generator Produces Electricity. Image Caption: This schematic shows the fabrication process for patterned surfaces in the triboelectric nanogenerators and pressure sensors. 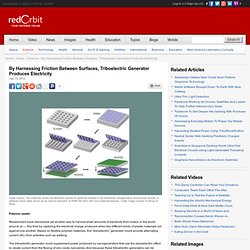 A patterned silicon wafer serves as the mold for fabrication of PDMS thin films with micro-patterned features. Somebody please use this piezo-electric jet fan to build some next gen LED spotlights. LED spotlights helped us reefers get our feet with with this new efficient lighting technology but there’s been an unfortunate stagnation in this segment of the reef lighting market as of late. 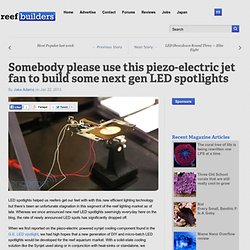 Whereas we once announced new reef LED spotlights seemingly everyday here on the blog, the rate of newly announced LED spots has significantly dropped off. When we first reported on the piezo-electric powered synjet cooling component found in the G.E. Electric Car Of Tomorrow Has Energy Storage In Panels. Volvo seems to want to be on the cutting edge of electric vehicle research, despite the fact it doesn’t have that much in the way of actual green car offerings as of yet. 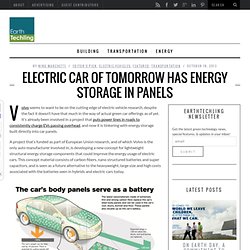 It’s already been involved in a project that puts power lines in roads to consistently charge EVs passing overhead, and now it is tinkering with energy storage built directly into car panels. A project that’s funded as part of European Union research, and of which Volvo is the only auto manufacturer involved in, is developing a new concept for lightweight structural energy storage components that could improve the energy usage of electric cars. This concept material consists of carbon fibers, nano structured batteries and super capacitors, and is seen as a future alternative to the heavyweight, large size and high costs associated with the batteries seen in hybrids and electric cars today. Clothing as a supercapacitor. 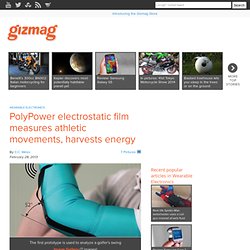 The sensor could prove a veritable technology on its own, but PolyPower technology is also being explored as a means of actuation and energy harvesting. View all. GE looking to saddle up with TI, bring dual-piezo jet cooling to market. Amplified piezoelectric actuator - 94 - 130 µm, 1 750 - 2 000 Hz. New Solar-Piezoelectric Hybrid Fiber Makes Clean Energy as Easy as Putting on a T-Shirt. Clean Power Published on December 2nd, 2010 | by Tina Casey Scientists at the University of Bolton in the U.K. have come up with a new fiber that can harvest energy from the wind, rain, sun, and even body movements. 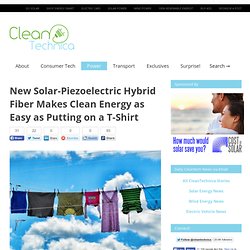 The lightweight, flexible material could be used to make self-charging casings for laptops, phones, and other portable devices, and it could lend itself to many other uses from clothes to camping gear. The researchers have embarked on a three-year project to develop and commercialize the new fiber with researchers in China. Flexible, light solar cells could provide new opportunities. Illustration shows the layered structure of the new device, starting with a flexible layer of graphene. 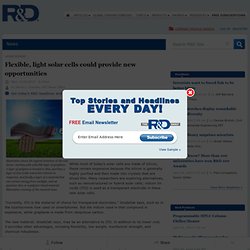 A layer of polymer is bonded to that, and then a layer of zinc-oxide nanowires (shown in magenta), and finally a layer of a material that can extract energy from sunlight, such as quantum dots or a polymer-based material. Illustration courtesy of the research team Massachusetts Institute of Technology (MIT) researchers have produced a new kind of photovoltaic cell based on sheets of flexible graphene coated with a layer of nanowires. The approach could lead to low-cost, transparent, and flexible solar cells that could be deployed on windows, roofs, or other surfaces.

The new approach is detailed in a report published in Nano Letters, co-authored by MIT postdoctoral researchers Hyesung Park and Sehoon Chang; associate professor of materials science and engineering Silvija Gradečak; and eight other MIT researchers. The new material, Gradečak says, may be an alternative to ITO. GE Says Its Dual Piezoelectric Cooling Jets Will Lead to Thinner Laptops and Tablets. 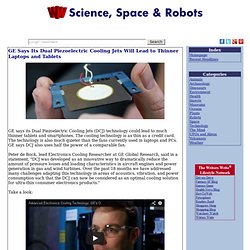 The cooling technology is as thin as a credit card. The technology is also much quieter than the fans currently used in laptops and PCs. PiezoElectric Fabrics. Polymer power: Triboelectric generator produces electricity by harnessing friction between surfaces. Researchers have discovered yet another way to harvest small amounts of electricity from motion in the world around us – this time by capturing the electrical charge produced when two different kinds of plastic materials rub against one another.

Plastic power, harnessing friction between transparent surfaces. Researchers have discovered yet another way to harvest small amounts of electricity from motion in the world around us - this time by capturing the electrical charge produced when two different kinds of plastic materials rub against one another. Based on flexible polymer materials, this "triboelectric" generator could provide alternating current (AC) from activities such as walking. The triboelectric generator could supplement power produced by nanogenerators that use the piezoelectric effect to create current from the flexing of zinc oxide nanowires.

Triboelectric generator produces electricity by harnessing friction between surfaces. Related images(click to enlarge) Generator Produces Electricity By Harnessing Friction. Triboelectric generator could allow electricity-generating touchscreens. Researchers at the Georgia Institute of Technology have taken advantage of the triboelectric effect, which sees an electric charge generated through friction between two different materials, to develop a generator that could supplement power produced by piezoelectric nanogenerators previously developed at Georgia Tech. 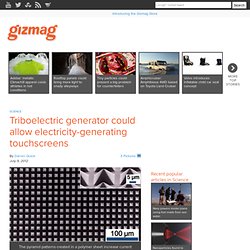 The triboelectric generator could be used to produce electricity from activities such as walking and even has the potential to create touchscreens that generate their own power. “The fact that an electric charge can be produced through this [triboelectric] principle is well known,” said Zhong Lin Wang, a Regents professor in the School of Materials Science & Engineering at the Georgia Institute of Technology.

“What we have introduced is a gap separation technique that produces a voltage drop, which leads to a current flow, allowing the charge to be used. NASA Spacesuit Could Harness Astronaut's Energy to Power Electronics. Share on Tumblr Email For college student Olivia Lenz, people are “wasting” energy all the time just by swinging their arms or walking down the street. Journal of Electroceramics, Volume 19, Number 1. The vast reduction in the size and power consumption of sensors and CMOS circuitry has led to a focused research effort on the on-board power sources which can replace the batteries.

The concern with batteries has been that they must always be charged before use. Similarly, the sensors and data acquisition components in distributed networks require centralized energy sources for their operation. In some applications such as sensors for structural health monitoring in remote locations, geographically inaccessible temperature or humidity sensors, the battery charging or replacement operations can be tedious and expensive. Logically, the emphasis in such cases has been on developing the on-site generators that can transform any available form of energy at the location into electrical energy. Energy Harvesting for Electric Vehicles 2012-2022.

PiezoElectric Rochelle Salt Crystals With Gold. Charge A Laptop By Typing On It. A team of scientists at the Lawrence Berkeley National Laboratory in California, USA, have genetically engineered a harmless virus to convert mechanical energy into electrical energy. The breakthrough-technology essentially means that an electronic device could be charged via everyday actions such as typing, walking, or closing a door. The scientists used the M13 virus- a harmless virus common in science labs.

They found that the M13 virus was piezoelectric, meaning that it could create an electrical charge when it experienced mechanical stress (aka an act like typing). By genetically engineering the virus, the scientists were able to boost its charge and were able to create a ‘virus-powered LCD: New graphene-based material could advance electronics industry. Photovoltaic-Piezoelectric Hybrid Device Harvests Solar, Wind and Rain Energy.

Kyocera Corp. : KYOCERA Introduces URBANO PROGRESSO, World’s First Smartphone to Transmit Clear Voice Reception via Vibration of Display Screen. May 15, 2012 (This product is only available to the Japanese market.) Kyocera Corporation (President: Tetsuo Kuba) today announced the release of the URBANO PROGRESSO, the world's first smartphone*1 to be equipped with Smart Sonic Receiver technology which transmits clear voice quality to the user directly through vibrations in the handset's display screen - a technology co-developed by Kyocera and KDDI Corporation, based on Kyocera's proprietary advanced ceramic technology.