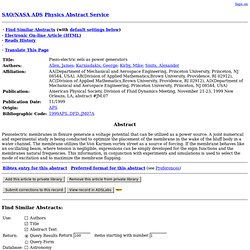 The signals of an electric eel - hl051_09_electriceel_en.pdf. The signals of an electric eel: piezoelectric power generation on a hi. Using a CRP (carbon fiber reinforced plastics) rear swinging fork with piezoelectric ceramics, the electrical signals generated by the uneven ground should control the dampers in the chassis frame of full suspensions. 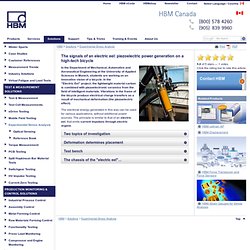 In the stem, a system for monitoring the loads on the forks and the handlebars was examined. The signals of the piezoelectric modules are used to register overloads. Warning lights on the handlebars indicate, for example, when the bicycle has to be inspected. "Against a background of safety and warranty aspects, the importance of load monitoring systems will increase drastically in many areas of machine and vehicle construction, as will optimization of maintenance cycles. Various sensors are suitable, depending on the application. Margot Krasojevic - Project - Piezoelectric Canopy Playground. The Piezoelectric playground is a temporary structure designed for the Pioneers park in Belgrade, Serbia.

It will be used as a bandstand and playground. The canopy is a hyperbolic structure which folds in on itself draining rain water into the pool directly underneath it which diffracts light (acting as a prism) further magnifying the activities within the canopy structure. The canopy's geometry blurs the relationship between interior and exterior spaces; as it is a surface with one boundary, mathematically the form is non-orientable which focuses on the event as a way of defining it's physical presence on site. The canopy never lights up in the same way twice and our perception of the canopy glowing and projecting light describes a very different environment every time it is used as either a playground shelter or outdoor concert canopy. This project was inspired by Thomas Wilfred's Clavilux projects from 1930. 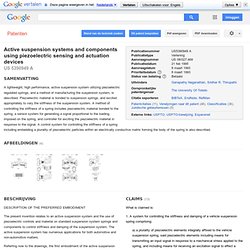 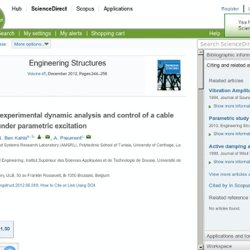 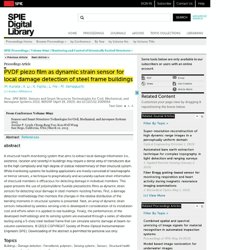 While monitoring systems for building applications are mostly consisted of seismographs or tremor sensors, a technique to pragmatically and accurately capture strain information of structural members is efficacious for detecting damage in individual members. This paper presents the use of polyvinylidene fluoride piezoelectric films as dynamic strain sensors for detecting local damage in steel moment-resisting frames. First, a damage detection methodology that monitors the changes in the relative distribution of the bending moments in structural systems is presented.

Citation M. Access This Article Processing your request... Sign In to Access Full Content The username and/or password is blank. Super-bridges suspended over carbon nanotube cables - Abstract - Journal of Physics: Condensed Matter. In this paper the new concept of 'super-bridges', i.e. kilometre-long bridges suspended over carbon nanotube cables, is introduced. 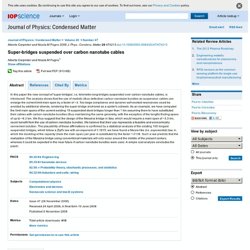 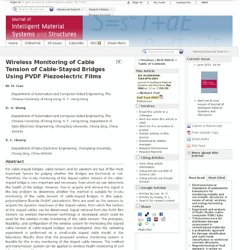 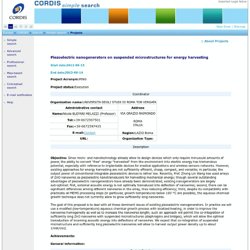 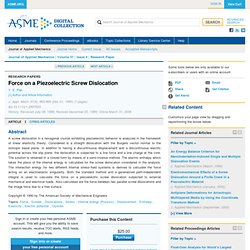 Considered is a straight dislocation with the Burgers vector normal to the isotropic basal plane. In addition to having a discontinuous displacement and a discontinuous electric potential across the slip plane, the dislocation is subjected to a line force and a line charge at the core. A Piezoelectric PZT Ceramic Multilayer Stack for Energy Harvesting Under Dynamic Forces. In this paper, we report the study of a “33” longitudinal mode, piezoelectric PZT ceramic multilayer stack (PZT-Stack) with high effective piezoelectric coefficient for broader bandwidth high-performance piezoelectric energy harvesting transducers (PEHTs). 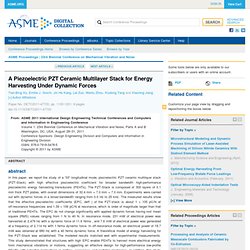 The PZT-Stack is composed of 300 layers of 0.1 mm thick PZT plates, with overall dimensions of 32.4 mm × 7.0 mm × 7.0 mm. Experiments were carried out with dynamic forces in a broad bandwidth ranging from 0.5 Hz to 25 kHz. The measured results show that the effective piezoelectric coefficients (EPC, deff ) of the PZT-stack is about 1 × 105 pC/N at off-resonance frequencies and 1.39 × 106 pC/N at resonance, which is order of magnitude larger than that of traditional PEHTs. The EPC do not change significantly with applied dynamic forces having root mean square (RMS) values ranging from 1 N to 40 N. Copyright © 2011 by ASME. A novel device for the harvesting or capture of piezoelectric energy.