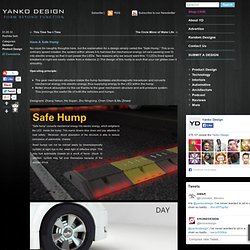 This is no ordinary speed breaker, the system within allows it to harness the mechanical energy (of cars passing over it) into electric energy so that it can power the LEDs. Two reasons why we would want this: 1) LEDs lined speed breakers at night are easily visible from a distance 2) The design of this hump is such that your car glides over it smoothly.Operating principle: The gear mechanism structure inside the hump facilitates electromagnetic transducer and converts mechanical energy into electric energy, thus supplying energy to the LED within the hump.Better shock absorption by the car thanks to the gear mechanism structure and anti-pressure system. This prolongs the useful life of both the vehicles and humps. 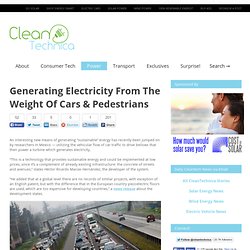 “This is a technology that provides sustainable energy and could be implemented at low prices, since it’s a complement of already existing infrastructure: the concrete of streets and avenues,” states Héctor Ricardo Macías Hernández, the developer of the system. “He added that at a global level there are no records of similar projects, with exception of an English patent, but with the difference that in the European country piezoelectric floors are used, which are too expensive for developing countries,” a news release about the development states. Mexican entrepreneurs developed a system capable of using the vehicular flow to generate electric energy.Image Credit: Investigación y Desarrollo Related Posts. New Piezoelectric Technologies Drive Energy Harvesting - Energy Harvesting. Piezoelectric technology has been used for many years to create a spark when a crystal is squeezed, but recently the opposite effect is creating more interest. 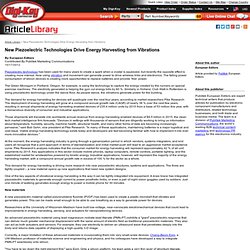 Now using vibration and movement can generate power to drive wireless links and electronics. The falling power consumption of silicon devices is creating more opportunities to replace batteries and provide ‘free’ power. The Green Microgym in Portland, Oregon, for example, is using the technology to capture the energy created by the runners on special exercise machines. The electricity generated is helping the gym cut energy bills by 60 %.

Similarly in Holland, Club Watt in Rotterdam is using piezoelectric technology under the dance floor. The demand for energy harvesting for devices will quadruple over the next four years, according to market researchers Pike Research. This demand for energy harvesting is driving more research into new piezoelectric structures, systems and applications. New materials. Burger King Installing Speed Bumps That Generate Electricity. 26 second video of MotionPower concept For years we have complained that all these schemes to harvest energy from moving cars, like the recent installation at a Sainsbury in the UK, were just a very inefficient tax on drivers, but they keep popping up. 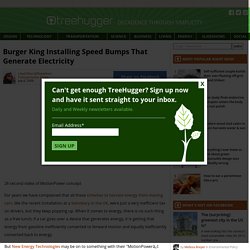 When it comes to energy, there is no such thing as a free lunch; if a car goes over a device that generates energy, it is getting that energy from gasoline inefficiently converted to forward motion and equally inefficiently converted back to energy. But New Energy Technologies may be on to something with their "MotionPowerâ„¢ Energy Harvesting". They only want to put their device where people are slowing down and would otherwise be using the brakes.

They are a bit over the top in their prose, writing that "Our technology is similar to what is used to power hybrid cars, but instead of being installed in each vehicle, it's installed in the roadways, capturing the friction energy that is otherwise dissipated as heat Where do I start?