How Jared Kushner’s Secret Testing Plan “Went Poof Into Thin Air” And that is where the U.S. finds itself today—in a massive testing crisis. 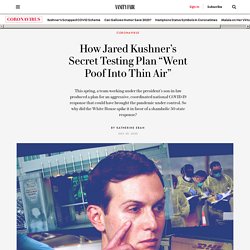 States have been forced to go their own way, amid rising case counts, skyrocketing demand for tests, and dwindling laboratory capacity. By mid-July, Quest Diagnostics announced that the average time to turn around test results was seven days. It is obvious to experts that 50 individual states cannot effectively deploy testing resources amid vast regulatory, financial, and supply-chain obstacles. The diagnostic-testing industry is a “loosely constructed web,” said Dr.

Pellini of Section 32, “and COVID-19 is a stage five hurricane.” Dr. Attendees must unmask before VP Pence joins roundtable (5/8/20) Coronavirus I - VI+: John Oliver. Trump's Hydroxychloroquine Microcosm. But clinical evidence began to accumulate suggesting not only that hydroxychloroquine wasn’t particularly effective against the coronavirus, but also that employing it might be doing more harm than good, owing to its side effects. 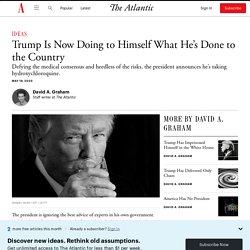 The Food and Drug Administration, led by a Trump appointee, urged doctors and patients not to use it for COVID-19. Hydroxychloroquine disappeared from Trump’s spiel practically overnight—until yesterday, when, in the middle of a meandering riff about the whistleblower Rick Bright, the president came back to it. “And a lot of good things have come out about the hydroxy. A lot of good things have come out,” he said. “You’d be surprised at how many people are taking it, especially the frontline workers—before you catch it. For anyone who treats medical evidence seriously, assesses risk, and acts prudently, Trump’s decision to take a potentially hazardous drug prophylactically is crazy. David A. Trump said a White House doctor had prescribed the medicine.

McConnell vows to end enhanced unemployment benefits. McConnell warned against trial lawyer "vultures" ready to file lawsuits and said Republicans are "going to have to clean up the Democrats’ crazy policy that is paying people more to remain unemployed than they would earn if they went back to work," McConnell said. 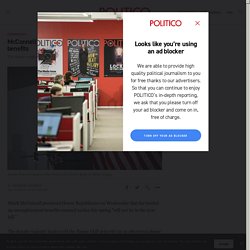 The remarks amount to a hardening of McConnell's position and a dismissal of House Democrats' priorities before talks even begin. But as McConnell praised House Republicans for holding firm against Speaker Nancy Pelosi's legislation and mocked her proxy voting plan, Senate Democrats were getting opposite instructions during a midday telephone conference call. Economist Mark Zandi told Senate Democratic committee leaders that Congress needs to extend the beefed-up unemployment insurance and move "quickly" to send more aid to states and cities. Zandi said those governments are "teetering on the financial edge," according to a person on the call, and predicted many more jobs could be lost without quicker action. Attendees must unmask before VP Pence joins roundtable (5/8/20) Trump's 100 Days of Deadly Coronavirus Denial. 34 Days Of Pandemic. Why am I not surprised? 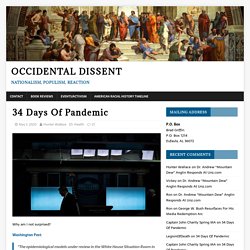 Washington Post: “The epidemiological models under review in the White House Situation Room in late March were bracing. In a best-case scenario, they showed the novel coronavirus was likely to kill between 100,000 and 240,000 Americans. President Trump was apprehensive about so much carnage on his watch, yet also impatient to reopen the economy — and he wanted data to justify doing so.So the White House considered its own analysis.

A small team led by Kevin Hassett — a former chairman of Trump’s Council of Economic Advisers with no background in infectious diseases — quietly built an econometric model to guide response operations.Many White House aides interpreted the analysis as predicting that the daily death count would peak in mid-April before dropping off substantially, and that there would be far fewer fatalities than initially foreseen, according to six people briefed on it. Imagine being a fly on the wall in the White House. 4/12/20: US global reputation hits rock-bottom over Trump's coronavirus response. Donald Trump’s response to the coronavirus pandemic, which he once dismissed as a hoax, has been fiercely criticised at home as woefully inadequate to the point of irresponsibility. 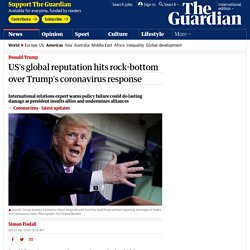 Yet also thanks largely to Trump, a parallel disaster is unfolding across the world: the ruination of America’s reputation as a safe, trustworthy, competent international leader and partner. 4/6/20: Elizabeth Warren on covid-19, the presidency, and the economy. In January, Sen. 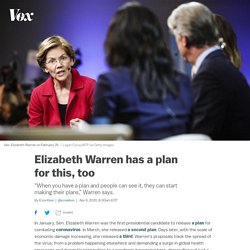 Elizabeth Warren was the first presidential candidate to release a plan for combating coronavirus. In March, she released a second plan. Days later, with the scale of economic damage increasing, she released a third. Warren’s proposals track the spread of the virus: from a problem happening elsewhere and demanding a surge in global health resources and domestic preparation to a pandemic happening here, demanding not just a public health response but an all-out effort to save the US economy. 4/6/20: White House Coronavirus Task Force Briefing. (Enter PRESIDENT TRUMP, VICE PRESIDENT PENCE, DR. 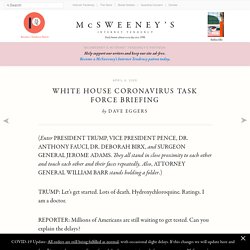 ANTHONY FAUCI, DR. 4/3/20: Kushner misinforms on the purpose of US Strategic Stockpile. Kushner, President Donald Trump's senior adviser and son-in-law, said at Thursday's coronavirus briefing that states themselves have medical equipment stockpiled -- and argued that "the notion of the federal stockpile was it's supposed to be our stockpile; it's not supposed to be state stockpiles that they then use. 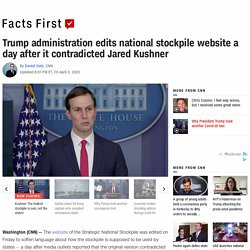 " Journalists and others quickly pointed out that the federal stockpile's own website made clear Kushner was wrong. As of early Friday morning, the stockpile's home page had read: "Strategic National Stockpile is the nation's largest supply of life-saving pharmaceuticals and medical supplies for use in a public health emergency severe enough to cause local supplies to run out. When state, local, tribal, and territorial responders request federal assistance to support their response efforts, the stockpile ensures that the right medicines and supplies get to those who need them most during an emergency. These sentences were gone as of Friday afternoon. 4/1/20: Fauci’s security stepped up as immunologist receives threats. 3/27/20: Trump denies tariff relief for shipments of Purell Hand Sanitizer. (Bloomberg) -- With the U.S. now surpassing all other countries in the number of coronavirus cases and health experts estimating the peak may still be weeks away, President Donald Trump’s administration is having a harder time defending tariffs on health-related goods imported from China. 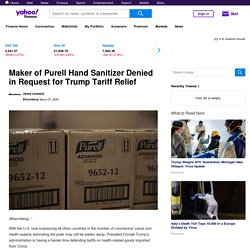 That’s especially true for products used in the U.S. response to the pandemic that are in high demand but running short on supply, such as ventilators, surgical masks and hand sanitizers. Getting to Know You: Ralph Drollinger. 3/24/20: A viral plea to let grandparents sacrifice themselves captures a truth about Trump. 3/19/20: Trump, coronavirus task force speak from the White House. WASHINGTON (AP) — Describing himself as a “wartime president” fighting an invisible enemy, President Donald Trump invoked rarely used emergency powers to marshal critical medical supplies against the coronavirus pandemic. 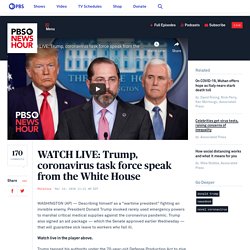 Trump also signed an aid package — which the Senate approved earlier Wednesday — that will guarantee sick leave to workers who fall ill. Watch live in the player above. Trump tapped his authority under the 70-year-old Defense Production Act to give the government more power to steer production by private companies and try to overcome shortages in masks, ventilators and other supplies.

3/23/20: Trump Considers Reopening Economy, Over Health Experts’ Objections. Michael barbaro From The New York Times, I’m Michael Barbaro. This is “The Daily.” Today: So far, the United States is losing the battle against the coronavirus. Donald G. 3/16/20: LISTEN: Before Trump’s inauguration, a warning: ‘The worst influenza pandemic since 1918’

“Rather than heed the warnings, embrace the planning and preserve the structures and budgets that had been bequeathed to him, the president ignored the risk of a pandemic,” Rice wrote. (Trump’s former national security adviser John Bolton, who oversaw the dissolution of the NSC’s global health security and biodefense section, has defended it as necessary streamlining, countering that global health “remained a top NSC priority.” Trump, when recently asked about the reshuffling, called the question “nasty” and said, “I don’t know anything about it.”) Lisa Monaco, Obama’s homeland security adviser, explained the thinking behind the January 2017 session in a recent essay for Foreign Affairs.

3/18/20: Presidential Powers and Response to COVID-19. The Centers for Disease Control and Prevention (CDC) modeling suggests that, without mitigation, severe acute respiratory syndrome coronavirus 2 (SARS-CoV-2), the virus that causes novel coronavirus disease 2019 (COVID-19), could infect more than 60% of the US population.1 President Trump has declared a national emergency along with 50 governors declaring state emergencies (Figure), which are unprecedented actions.

Social distancing aims to flatten the epidemic curve to moderate demand on the health system. Consequently, whether through voluntary actions or state mandates, individuals are increasingly sheltering at home, schools and universities are closing, businesses are altering operations, and mass gatherings are being canceled. On March 16, the health officers of 6 local governments in the San Francisco Bay Area issued mandatory orders to shelter in place, making it a misdemeanor offense to leave home for any nonessential purpose. Figure. VIDEO 3/18/2: Don Lemon -President Trump is gaslighting you. 3/3/20: Trump Undermining U.S. Response to Coronavirus. The coronavirus has already caused several deaths in the United States, and the number of cases is rising. Senior officials at the Centers for Disease Control and Prevention have warned it could potentially cause “severe” disruptions to everyday life. An effective response will require the public to trust that the decisions made by government officials are consistent with the best available information and science — not based on political considerations.

3/3/20: CDC blocked FDA official from premises. A CDC spokesperson said that the delay was because of a scheduling misunderstanding. "On Saturday, February 22, at about 7 p.m., an FDA employee arrived at CDC Roybal campus in Atlanta, a day before what CDC understood to be his scheduled arrival time. Due to CDC security requirements, he was not allowed on campus that night," the spokesperson said. "On Sunday morning, February 23, as scheduled, CDC staff met the FDA employee and escorted him on campus, in full compliance with standard security processes required for all individuals whether they are federal employees or other visitors.

" 3/2/20: Coronavirus —Last Week Tonight with John Oliver. 2/25/20: Trump claims coronavirus is 'going to go away' despite mounting concerns. The President maintained his sunny optimism about the virus that is showing signs of spreading around the world from its Chinese epicenter and is already having a huge impact on global commerce. 2/25/20: CDC official: ...Not a question of if, but when. "We expect we will see community spread in this country," said Dr. Nancy Messonnier, director of the CDC's National Center for Immunization and Respiratory Diseases.