Mental health and youth and young adults (Journey 4) - infographic 1. Print Email You are here: Mental health and youth and young adults (Journey 4) - infographic 1 Journey 4_infographic 1.png Infographic Top 3 issues of concern to young people are: school or study problems - 38%coping with stress - 37%body image - 31% These problems cause enormous stress and adversely affect mental health and self-esteem. 1 in 4 Australians aged 16-24 are living with a mental disorder and 1 in 3 experiences moderate to high levels of psychological distressAbout 1/3 of young women and 1/4 of young men had a mental health disorderYoung women were more likely to have anxiety or affective disorders than young menMental illness in young men aged 12-25 alone has been estimated to cost the Australian economy $3.27 billion a year in lost productivityAustralia loses more than 9 million working days per annum because of mental illness among young men aloneHowever, data measuring young men's access to mental health care reveals that only 13% received any care for their mental illness. 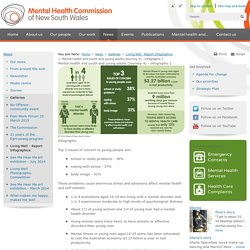 News. Young Australians are increasingly diverse. Australia’s young people are diverse, coming from a range of backgrounds and socioeconomic circumstances In an increasingly globalised world, it is not just the growing numbers of young Australians that will be our strength, it is also their diversity. 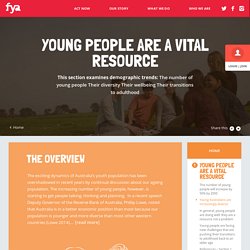 Diversity creates new and interesting cultures, fosters ideas and innovation, and builds relationships with others around the globe. There are two intersecting types of diversity in Australia: diversity of background/identity; and of socioeconomic status. The former provides significant opportunities while the latter represents a waste of resources for Australia. Diversity of backgrounds is a core strength Australia has been fortunate to have had waves of migrants from a range of backgrounds settle here. See Australia’s population count and look at who lives in your state or local area using census data. Young Australians: their health and wellbeing 2011. This report is the fourth in a series of national statistical reports on young people aged 12-24 years, produced by the Australian Institute of Health and Welfare. 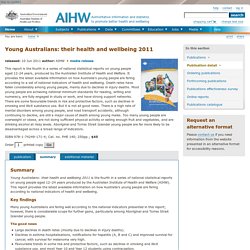 It provides the latest available information on how Australia's young people are faring according to a set of national indicators of health and wellbeing. Death rates have fallen considerably among young people, mainly due to declines in injury deaths. Most young people are achieving national minimum standards for reading, writing and numeracy, are fully engaged in study or work, and have strong support networks. There are some favourable trends in risk and protective factors, such as declines in smoking and illicit substance use. But it is not all good news. ISBN 978-1-74249-171-4; Cat. no. Summary. 12750. Infographic_drunkstats_1.

Closing the Gap - Department of the Prime Minister and Cabinet. Determinants of Health. Depression and asthma among biggest health threats to Australian youth: report. Chronic and non-communicable diseases like depression, asthma and musculoskeletal pain are the prevailing causes of poor health among Australian adolescents, a global study on illness and death among 10 to 24-year-olds has found. 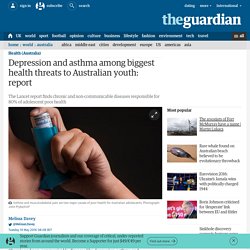 Published in the international medical journal The Lancet, the report found two-thirds of young people are growing up in countries where preventable and treatable conditions such as HIV/Aids, early pregnancy and violence threaten their health and chances of living to adulthood. But in Australia, chronic and non-communicable diseases were responsible for 80% of the poor health experienced by young people aged 10-24, a researcher for the study, Dr Peter Azzopardi, said. “Australia is a wealthy country,” said Azzopardi, who is a researcher with the Murdoch Children’s Institute. “We have a reasonably well-funded health system but, having said that, our adolescents, which represent 20% of our population, are experiencing a significant burden of poor health.” Secondary schools program. Beyondblue's secondary school program for years 8–10 aims to equip students with the ability to deal with adverse events through the teaching of ‘life skills’ within a supportive and safe school environment. 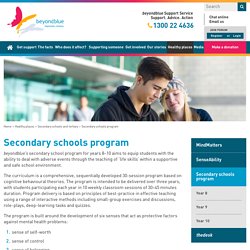 The curriculum is a comprehensive, sequentially developed 30-session program based on cognitive behavioural theories. The program is intended to be delivered over three years, with students participating each year in 10 weekly classroom sessions of 30–45 minutes duration. Program delivery is based on principles of best-practice in effective teaching using a range of interactive methods including small-group exercises and discussions, role-plays, deep-learning tasks and quizzes. The program is built around the development of six senses that act as protective factors against mental health problems: