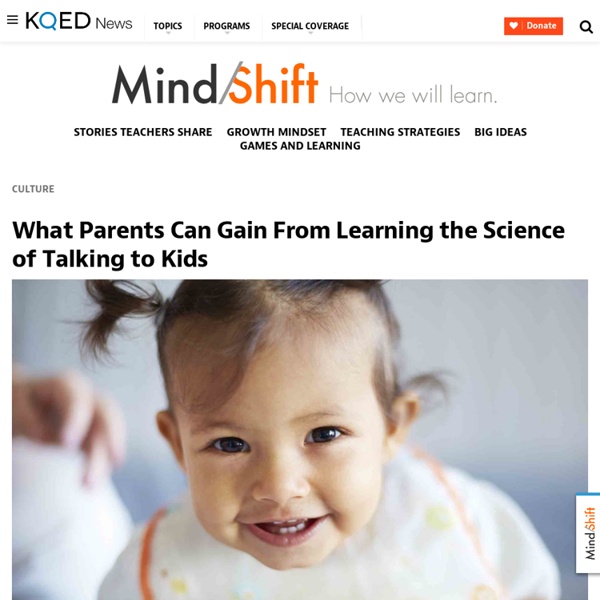 The widening education gap between the rich and the poor is not news to those who work in education, many of whom have been struggling to close the gap beginning the day poor children enter kindergarten or preschool. But one unlikely soldier has joined the fight: a pediatric surgeon who wants to get started way before kindergarten. She wants to start closing the gap the day babies are born. When Dr. Dana Suskind began doing cochlear implants on infants at the University of Chicago—a cutting-edge surgical technique that allows once-deaf babies to hear—in her follow-ups with families she noticed a stark difference in how the now-hearing children acquired language. Once they could hear, some children’s language skills thrived and grew, while others languished. The difference turned out to be the words children heard from their parents and caregivers, millions of them. For Suskind, a lightbulb went on. Bringing Parents On Board Of course, some words are more powerful than others. * Tune In.

How young children learn English as another language By Opal Dunn, educational consultant and author Introduction Young children are natural language acquirers; they are self-motivated to pick up language without conscious learning, unlike adolescents and adults. They have the ability to imitate pronunciation and work out the rules for themselves. Any idea that learning to talk in English is difficult does not occur to them unless it’s suggested by adults, who themselves probably learned English academically at a later age through grammar-based text books.

Enhancing the Language Development of Young Children When we first brought our daughter home from the hospital I was inexperienced. Mother came to help and in her always wise and gentle way said, "Honey, you need to talk to that baby." What wonderful advice! How young children learn English through play As we release Learning Time with Timmy – our first app for early-years learners of English – Danitza Villarroel, a teacher on our Learning Time with Shaun and Timmy course in Chile, explains the importance of learning through play, and offers a few tips for teachers new to this age group. Teaching English to pre-school children can be daunting for teachers new to this age group. Young children have shorter attention spans than older children and adults, and they're still learning their mother tongue. But teaching these learners can be enormously rewarding once you've taken a few basic principles on board.

The cognitive benefits of play: Effects on the learning brain © 2008 - 2014, Gwen Dewar, Ph.D., all rights reserved Science supports many of our intuitions about the benefits of play. Playful behavior appears to have positive effects on the brain and on a child’s ability to learn. Heuristic play Heuristic play is rooted in young children’s natural curiosity. As babies grow, they move beyond being content to simply feel and ponder objects, to wanting to find out what can be done with them. Toddlers have an urge to handle things: to gather, fill, dump, stack, knock down, select and manipulate in other ways. Household or kitchen utensils offer this kind of activity as every parent knows, and can occupy a child for surprising stretches of time. When toddlers make an enjoyable discovery – for instance when one item fits into another, or an interesting sound is produced – they often repeat the action several times to test the result, which strengthens cognitive development as well as fine muscle control and hand/eye coordination.

Does being bilingual make you smarter? Language teacher and researcher Miguel Angel Muñoz explains the latest research on how being bilingual affects your brain, ahead of a British Council seminar in Cardiff on whether learning a foreign language makes you smarter. You can watch the live-streamed seminar on Tuesday, 3 June. More than half the world's population uses two or more languages every day It is hard to estimate the exact number of bilingual people in the world, as there is a lack of reliable statistics . But in 2012, a Eurobarometer survey established that 'just over half of Europeans (54%)' are bilingual, and other studies hypothesise that more than half of the world’s population is bilingual. So what about you?

How can young children best learn languages? The British Council's Tracey Chapelton explains how parents of young children can lay the foundations for success. Children's brains are highly active Your child is unique, but what all children have in common is natural curiosity and an innate ability to learn. Kuhl states that babies and young children are geniuses at acquiring a second language. 'Babies', she says, 'can discriminate all the sounds of all languages... and that's remarkable because you and I can't do that. We're culture-bound listeners.

Importance of play for babies & children Play is more than just fun for babies and children. It’s how they learn best, and how they work out who they are, how the world works and where they fit into it. You can read this article in a selection of languages other than English. The importance of play Playing is one of the most important things you can do with your child, because play is essential for your child’s brain development. Scientists Say Child's Play Helps Build A Better Brain : NPR Ed Deion Jefferson, 10, and Samuel Jefferson, 7, take turns climbing and jumping off a stack of old tires at the Berkeley Adventure Playground in California. The playground is a half-acre park with a junkyard feel where kids are encouraged to "play wild." David Gilkey/NPR hide caption

Why Movement is Essential in Early Childhood With so few years under their belts, my 3- and 6-year-old daughters are still learning to inhabit their bodies. They are learning how to maneuver themselves physically, how to orient themselves in space. As Vanessa Durand, a pediatrician at St. Christopher’s Hospital for Children in Philadelphia, says, freedom of movement is necessary for children to meet their developmental milestones: “Children learn by experiencing their world using all of their senses. The restriction of movement, especially at a young age, impedes the experiential learning process.”