ACCA Qualification. The syllabus for Paper F1, Accountant in Business includes the theory of organisations and related topics. 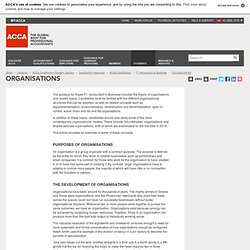 Candidates must be familiar with the different organisational structures that can be adopted, as well as related concepts such as departmentalisation, divisionalisation, centralisation and decentralisation, span of control, scalar chain and tall and flat organisations. In addition to these topics, candidates should also study some of the more contemporary organisational models. These include ‘boundaryless’ organisations and shared services organisations, both of which are examinable for the first time in 2014. This article provides an overview of some of these concepts. An organisation is a group of people with a common purpose. Organisations have been around for thousands of years. F1 Accountant in Business. Global 500 2014. Companies are ranked by total revenues for their respective fiscal years ended on or before March 31, 2015. 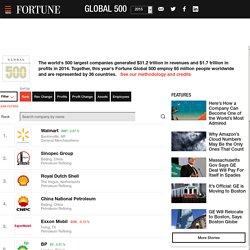 All companies on the list must publish financial data and report part or all of their figures to a government agency. Figures are as reported, and comparisons are with the prior year’s figures as originally reported for that year. Fortune does not restate the prior year’s figures for changes in accounting. Revenues Revenue figures include consolidated subsidiaries and reported revenues from discontinued operations, but exclude excise taxes. Profits Profits are shown after taxes, extraordinary credits or charges, cumulative effects of accounting changes, and noncontrolling (minority) interests, but before preferred dividends. 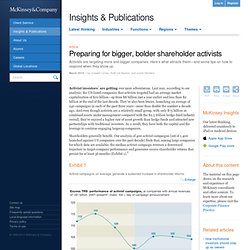 Last year, according to our analysis, the US-listed companies that activists targeted had an average market capitalization of $10 billion—up from $8 billion just a year earlier and less than $2 billion at the end of the last decade. They’ve also been busier, launching an average of 240 campaigns in each of the past three years—more than double the number a decade ago. And even though activists are a relatively small group, with only $75 billion in combined assets under management compared with the $2.5 trillion hedge-fund industry overall, they’ve enjoyed a higher rate of asset growth than hedge funds and attracted new partnerships with traditional investors.

As a result, they have both the capital and the leverage to continue engaging largecap companies. Shareholders generally benefit. Exhibit 1 Activist campaigns, on average, generate a sustained increase in shareholder returns. The movement for Responsible Investment. ICA: International Co-operative Alliance. The Global300 Report was last published in 2011 and brings together information about the 300 largest co-operative organisations around the world, in order to demonstrate the movement’s scale, breadth and reach. 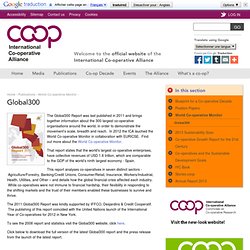 In 2012 the ICA lauched the World Co-operative Monitor in collaboration with EURICSE. Find out more about the World Co-operative Monitor. That report states that the world's largest co-operative enterprises, have collective revenues of USD 1.6 trillion, which are comparable to the GDP of the world’s ninth largest economy - Spain. This report analyses co-operatives in seven distinct sectors - Agriculture/Forestry, Banking/Credit Unions, Consumer/Retail, Insurance, Workers/Industrial, Health, Utilities, and Other – and details how the global financial crisis affected each industry. While co-operatives were not immune to financial hardship, their flexibility in responding to the shifting markets and the trust of their members enabled these businesses to survive and thrive.

Chart your success. 1 Familiarisation Think of your employer as a family and the organisation chart as the family tree. 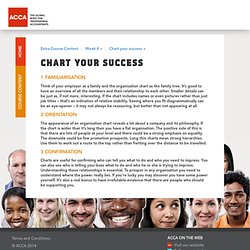 It’s good to have an overview of all the members and their relationship to each other. Smaller details can be just as, if not more, interesting. If the chart includes names or even pictures rather than just job titles – that’s an indication of relative stability. Seeing where you fit diagrammatically can be an eye-opener – it may not always be reassuring, but better than not appearing at all. 2 Orientation The appearance of an organisation chart reveals a lot about a company and its philosophy. 3 Confirmation. Corporate governance – external and internal actors. Corporate governance – external and internal actors Corporate governance is a process and a system – and as with any system, it has many parts. 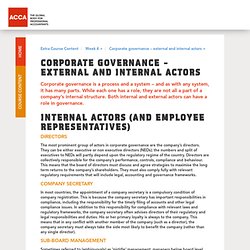 While each one has a role, they are not all a part of a company’s internal structure. Both internal and external actors can have a role in governance. Directors. Podcast: corporate governance. Diversifying the board. The responsibilities of the board of directors have been on the corporate agenda for years. 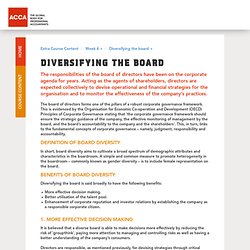 Acting as the agents of shareholders, directors are expected collectively to devise operational and financial strategies for the organisation and to monitor the effectiveness of the company’s practices. The board of directors forms one of the pillars of a robust corporate governance framework. Podcast: diversifying the board. How to fit in/corporate culture. Corporate culture – ‘the way we do things around here’ – gives each organisation its unique identity. 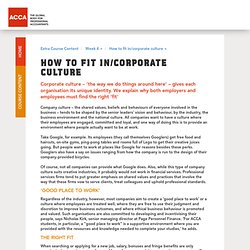 We explain why both employers and employees must find the right ‘fit’ Creating a cultural web. Organisational culture was described by Handy as ‘the way we do things round here’. 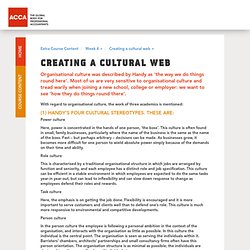