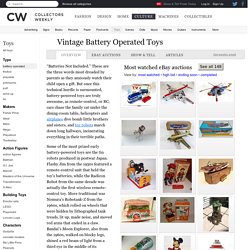 These are the three words most dreaded by parents as they anxiously watch their child open a gift. But once this technical hurdle is surmounted, battery-powered toys are truly awesome, as remote-control, or RC, cars chase the family cat under the dining-room table, helicopters and airplanes dive bomb little brothers and sisters, and toy robots march down long hallways, incinerating everything in their terrible paths. 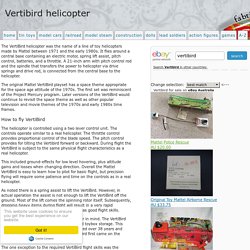 It flies around a central base containing an electric motor, spring lift assist, pitch control, batteries, and a throttle. VertiBird. Some toys are forgotten within months of their initial release; others linger in the memory banks for decades after their demise. 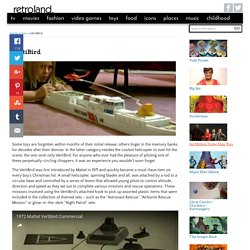 In the latter category resides the coolest helicopter to ever hit the scene, the one-and-only VertiBird. For anyone who ever had the pleasure of piloting one of these perpetually-circling choppers, it was an experience you wouldn’t soon forget. The VertiBird was first introduced by Mattel in 1971 and quickly became a must-have item on every boy’s Christmas list. A small helicopter, spinning blades and all, was attached by a rod to a circular base and controlled by a series of levers that allowed young pilots to control altitude, direction and speed as they set out to complete various missions and rescue operations. 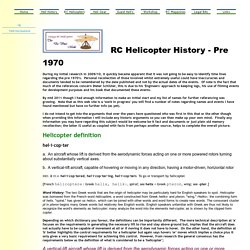 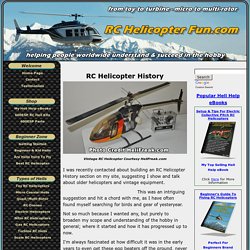 This was an intriguing suggestion and hit a chord with me, as I have often found myself searching for birds and gear of yesteryear. Not so much because I wanted any, but purely to broaden my scope and understanding of the hobby in general; where it started and how it has progressed up to now. I'm always fascinated at how difficult it was in the early years to even get these egg beaters off the ground, never mind have some form of rudimentary control over them. Tech Time Warp of the Week: The 1940s RC Copter That Paved the Way for Amazon’s Drones. This week the Federal Aviation Administration gave Amazon a green light to test its drone delivery program. 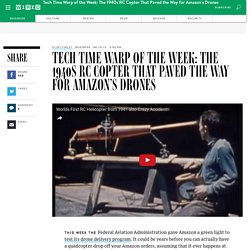 It could be years before you can actually have a quadcopter drop off your Amazon orders, assuming that it ever happens at all. But it’s impressive that it’s even a possibility considering that only a few decades ago, the idea of stable helicopter flight was a novel idea. The helicopter wasn’t invented by any single person. Simple propeller-based toys were used in China as far back as 400 BC, and many inventors built motorized versions over the years. But it was philosopher and mathematician Arthur M.

How can the road bike be improved? An Illustrated History of the Bicycle. Of course, once people started building bikes, it didn't take long for them to want to race each other. 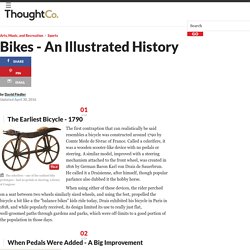 History holds the first recorded bicycle race to have taken place May 31, 1868 at the Parc de Saint-Cloud, Paris. The 1.2 km jaunt was won by Englishman James Moore on a wooden bike with iron tires inlaid with ball-bearings that helped speed him past the competition. TECHNOLOGY - IMPROVEMENTS IN THE BICYCLE. THE pace of bicycle evolution has increased in recent years, thanks largely to the well-publicized and startlingly successful effort to design cycles that would give the United States Olympic team in 1984 an advantage over riders from other countries. ''When I started in 1981, people were more worried about what color to paint cycles than how to improve them,'' said Edmund Burke, director of sports science and technology for the United States Cycling Federation. ''We took a very dormant industry and shook it up.'' 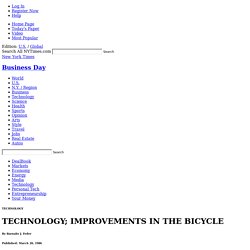 Improving the Bicycle. Bicycles have been around for many years and are constantly being researched and improved. 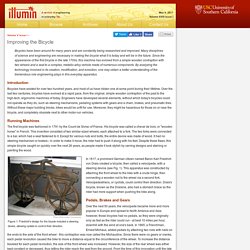 Many disciplines of science and engineering are necessary in making the bicycle what it is today and will be in the future. Since the appearance of the first bicycle in the late 1700s, this machine has evolved from a simple wooden contraption with two wheels and a seat to a complex, metallic-alloy vehicle made of numerous components. By analyzing the technology involved in its creation, modification, and evolution, one may obtain a better understanding of the tremendous role engineering plays in this everyday apparatus. Introduction Bicycles have existed for over two hundred years, and most of us have ridden one at some point during their lifetime. Running Machines. How the Design of a Product Changes over Time - The Bicycle. Bicycle History Timeline. National Bicycle History Archive of America Historical Sources / Museums / Exhibits - (Africa, America, Asia, England, Ireland, Europe) 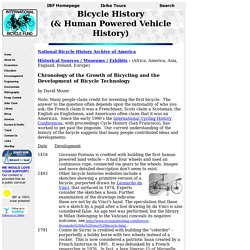