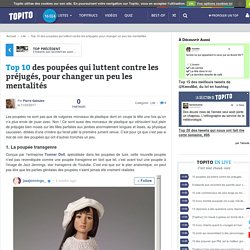 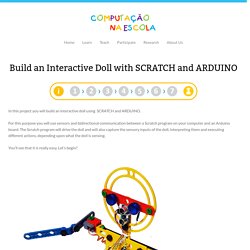 For this purpose you will use sensors and bidirectional communication between a Scratch program on your computer and an Arduino board. The Scratch program will drive the doll and will also capture the sensory inputs of the doll, interpreting them and executing different actions, depending upon what the doll is sensing. You’ll see that it is really easy. Let’s begin? BearDuino: Hacking Teddy Ruxpin with Arduino. As a geek father, I have a reputation to uphold. 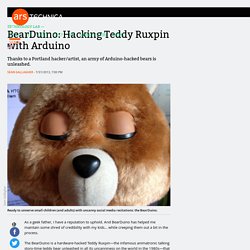 And BearDuino has helped me maintain some shred of credibility with my kids... while creeping them out a bit in the process. The BearDuino is a hardware-hacked Teddy Ruxpin—the infamous animatronic talking story-time teddy bear unleashed in all its uncanniness on the world in the 1980s—that has been turned into a kit for use with an Arduino microcontroller, ready for would-be makers to use for good or evil. I've been itching to do something with the open-source Arduino for a while. I like to break things to figure out how they work and then reconstruct them, and I have a closet full of projects completed or in progress—and the associated debris to prove it. But for the most part, I've shied away from electronic hardware hacks. 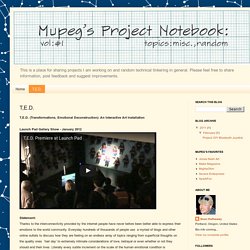 (Transformations, Emotional Deconstruction): An Interactive Art Installation Launch Pad Gallery Show - January 2012 Statement: Thanks to the interconnectivity provided by the internet people have never before been better able to express their emotions to the world community. Everyday hundreds of thousands of people use a myriad of blogs and other online outlets to discuss how they are feeling on an endless array of topics ranging from superficial thoughts on the quality ones ‘hair day’ to extremely intimate considerations of love, betrayal or even whether or not they should end their lives. Synopsis: TED is a large, wall-based installation consisting of an array of 80 Teddy Ruxpin dolls that speak emotional content gathered from the web via synthetic speech with animated mouths. What Children and Their Toys Look Like Around the World  Pretend Play - Girls' Toys. Pretend Play - Boys' Toys. Top 100 Best Cool Toys for Girls 2016. **Updated 12/6/16: I replaced some of the older toys with some brand new gift ideas, including some Moana toys and the Boogie Board Scribble ‘n Play. 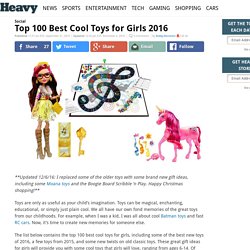 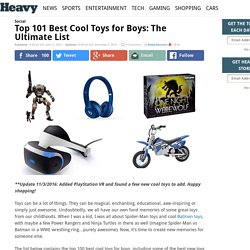 Happy shopping! Toys can be a lot of things. They can be magical, enchanting, educational, awe-inspiring or simply just awesome. Undoubtedly, we all have our own fond memories of some great toys from our childhoods. Let Toys Be Toys. Why does gender-stereotyped toy marketing matter? 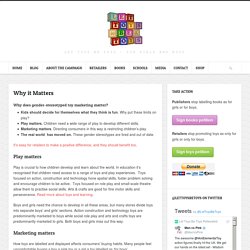 Kids should decide for themselves what they think is fun. Why put these limits on play? Play matters. Children need a wide range of play to develop different skills.Marketing matters. Directing consumers in this way is restricting children’s play.The real world has moved on. What do toys teach kids about gender roles? What the Research Says: Gender-Typed Toys. : Tell us about your toy research. 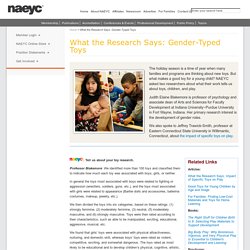 Dorothy Lepkowska on gender and toys. It was back in the 1970s that feminist educational researchers first studied the implications of the tendency for girls to play with dolls, and for boys to play with cars. 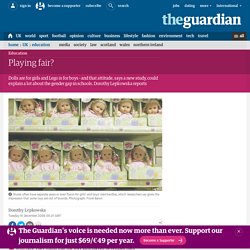 They found that the way girls played developed their communication skills and emotional literacy, while boys' toys encouraged them to grow up with better technical knowledge. The arrival of the national curriculum in the 1980s, and the consequent improvements in the academic achievements of girls, rendered the theories linking toys and potential for learning as unfashionable, and perhaps irrelevant.

But new research suggests that the issue should be revisited because, it seems, there has never been greater gender stereotyping in the production and marketing of toys than now. Toys Are More Divided by Gender Now Than They Were 50 Years Ago. When it comes to buying gifts for children, everything is color-coded: Rigid boundaries segregate brawny blue action figures from pretty pink princesses, and most assume that this is how it’s always been. 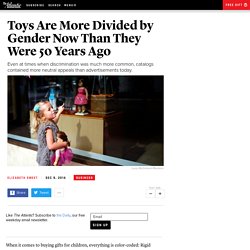 But in fact, the princess role that’s ubiquitous in girls’ toys today was exceedingly rare prior to the 1990s—and the marketing of toys is more gendered now than even 50 years ago, when gender discrimination and sexism were the norm. In my research on toy advertisements, I found that even when gendered marketing was most pronounced in the 20th century, roughly half of toys were still being advertised in a gender-neutral manner. This is a stark difference from what we see today, as businesses categorize toys in a way that more narrowly forces kids into boxes. Do children's toys influence their career choices?

Image copyright Alamy. Gender Roles and Toys. Toys play an important part in defining gender roles. If parents buy girls dolls, dollhouses, high-heeled shoes, and makeup, they give one set of messages. If they buy boys chemistry sets, tool kits, doctor’s bags, building blocks, and wheel toys, they give another set of messages. Children learn roles and skills from playing; the toys they have to some extent determine which roles and skills they learn. Visit a child care program and examine the environment, specifically the block area and the dramatic play corner. Early Childhood Development - Children and Toys. Educational Toys for Children with ADHD Old-fashioned Ways to Inspire Children Ten Things to Know Before Buying Educational Toys Childhood Development and Toys Educational Toys-Children Learn While Having Fun Guide to Choosing Educational Toys for Children Science Toys are Educational Toys What Toys Did Cavemen Kids Play With?

Playing is important to children. It is the way they practice growing up. Educational Benefits of Providing Toys To Children. Kids love toys. If you have any doubts about that, just take a child into a toy store. She will probably find a number of things that she feels she just can’t live without. Toys are more than just fun and games for kids. 30 Photos That Challenge the Harmful Stereotypes Toy Companies Sell You. Many years ago, there was no such thing as girls' and boys' toy aisles.

And why would there have been? Sure, toy companies often target children differently based on gender. But before toys diversified into the range of options available today, stores were less divided along the lines of action-figure blue and harrowing-pink tiara. What's worse, research suggests the state of gender-based toy segregation has created a generational shift. How Did Toys Get Stereotyped by Sex? Elizabeth Sweet, a postdoctoral scholar and lecturer in sociology at the University of California, Davis, is working on a book about toys, gender, and inequality over the 20th century.

In my research on historic toy advertisements, I found no period during the 20th century when the gender-based marketing of toys was anything near what we see today. In the 1975 Sears catalog, for example, toys came in many hues, and science kits and kitchen sets showed boys and girls working together. In the 1975 Sears catalog, toys came in many hues for boys and girls, and science kits and kitchen sets showed them working together. But with the growth of the consumer economy, toy companies worked to stimulate demand by honing their appeal to kids. Gender categorization provided a handy tool for toy companies to define target markets, and gender stereotypes drew the interest of young children forming their own sense of identity.

Toy Gender Stereotypes. Example Essays: Gender Role Barbie Dolls. National Conference for Community and Justice. Growing up, some of my fondest memories are from the holidays. I loved being around friends and family, and naturally, I loved getting new presents. Barbie Doll - Typical Stereotypes about Women. Play with Barbie dolls affects career aspirations for girls. Girls who play with Barbie dolls tend to see fewer career options available to them compared with the options available to boys, according to a new study by researchers at Oregon State University and the University of California, Santa Cruz. The study's authors, psychology professors Aurora Sherman of Oregon State and Eileen Zurbriggen at UC Santa Cruz, describe their findings as "sobering. " Their article "Boys Can Be Anything": Effect of Barbie Play on Girls' Career Cognitions," appears online in the Springer journal Sex Roles published March 5.

"This is one of the first studies to investigate how playing with sexualized dolls affects young girls, and also one of the first to look at the impact of such play on achievement or career aspirations, rather than body image," said Zurbriggen, second author of the paper. “Perhaps Barbie can ‘Be Anything’ as the advertising for this doll suggests," said first author Sherman. Girl's Toys - Growing up Gendered. How gender-specific toys can negatively impact a child’s development. A young girl paints the face of a doll. (REUTERS/Michaela Rehle ) Between the 1970s and the 1990s, while women in the U.S. were closing the gap in education and employment and breaking into the top ranks of politics and industry, one sector was moving in the wrong direction.

“The world of toys looks a lot more like 1952 than 2012,” Elizabeth Sweet, a sociologist studying children and gender inequality at the University of California, Davis wrote in a New York Times Op-Ed a few years ago. How Do Children's Toys Affect Gender Roles? Gender-Typed Toys Are Still A Growing Trend, So Why Aren't We Doing More To Fix This? At this time of year, Santa and all the parents, aunts, uncles, cousins, and friends of the world have many little gifts to pick out for the children in their lives — and apparently, it's safe to assume that many of these gift decisions begin with the basic question: am I shopping for a "girl toy" or "boy toy?

" Evidence taken from Google word use frequency trends, via Sociological Images, suggests that people are discussing toys in gendered ways more so today than they did in the past — and that seems discouraging. And now that we know the trend exists, it's time we finally start to do something about it. All it takes is one quick glance at the shelves of any given toy aisle to see that contemporary toymakers aren't quite getting it. Take the new Lego: Friends collection for girls, for instance. Girl and boy toys: Childhood preferences for gendered toys are not innate.

Caught on camera in the "pink aisle" of a U.S. toy store, 5-year-old Riley posed a multibillion-dollar question: "Why does all the girls have to buy pink stuff and all the boys have to buy different colored stuff? " Her impassioned critique of profit-boosting gendered toy marketing has been viewed more than 4 million times on YouTube. She isn't a lone voice. Sans titre. Do Girls Really Prefer Dolls? The Science Behind Gender Preference In Toys.

Doll - Wikipedia. A doll is a model of a human being, often used as a toy for children. Dolls have traditionally been used in magic and religious rituals throughout the world, and traditional dolls made of materials such as clay and wood are found in the Americas, Asia, Africa and Europe. The earliest documented dolls go back to the ancient civilizations of Egypt, Greece and Rome.

The use of dolls as toys was documented in Greece around 100 AD.