Toys Made in Minnesota

5 iconic toys born in Minnesota. Listen Culture revealed and memories evoked at toys exhibit Looking at toys of the past can be more than just a walk down memory lane.

Overview - Toys: Made in Minnesota - LibGuides at Minnesota Historical Society Library. Originating in Minnesota, the iconic Cootie Game and Tonka Trucks have been well-loved by children around the world for over 50 years. 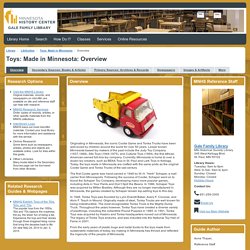 Lesser known Minnesota-based toy makers of the past include the Judy Toy Company (1937-1968), Sifo Toys (1944-1975), and Cultural Toys (1994), the first African American-owned full-line toy company. Currently, Minnesota is home to over a dozen toy creators, such as BEKA Toys in St. Paul and Lark Toys in Kellogg. US History in Context - Twister creator Charles Foley. Byline: Emily Langer Charles Foley, a creator of Twister, the party game that for nearly five decades has employed a dotted mat, a spinner, bare hands and stockinged feet to leave players of all ages tied up in knots, died July 1 in St. 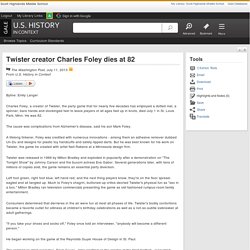 Louis Park, Minn. He was 82. The cause was complications from Alzheimer's disease, said his son Mark Foley. A lifelong tinkerer, Foley was credited with numerous innovations - among them an adhesive remover dubbed Un-Du and designs for plastic toy handcuffs and safety-tipped darts. Twister was released in 1966 by Milton Bradley and exploded in popularity after a demonstration on "The Tonight Show" by Johnny Carson and the buxom actress Eva Gabor.

Left foot green, right foot blue, left hand red, and the next thing players know, they're on the floor spread-eagled and all tangled up. Consumers determined that derrieres in the air were fun at most all phases of life. The Slightly Sordid History of Twister. Twister has been a sure fire way to break the ice at parties for decades now. 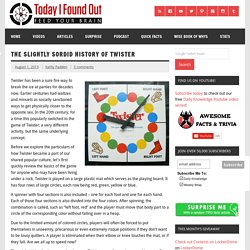 Earlier centuries had waltzes and minuets as socially sanctioned ways to get physically closer to the opposite sex. In the 20th century, for a time this popularly switched to the game of Twister; a very different activity, but the same underlying concept. Before we explore the particulars of how Twister became a part of our shared popular culture, let’s first quickly review the basics of the game for anyone who may have been living under a rock. Twister is played on a large plastic mat which serves as the playing board. It has four rows of large circles, each row being red, green, yellow or blue. A spinner with four sections is also included – one for each foot and one for each hand.

Due to the limited amount of colored circles, players will often be forced to put themselves in unseemly, precarious or even extremely risqué positions if they don’t want to be lousy quitters. Expand for References. National Toy Hall of Fame. In 1964 toy inventor Reyn Guyer conceived a shoe polish promotion as a game with a mat on the floor and with people serving as the playing pieces. 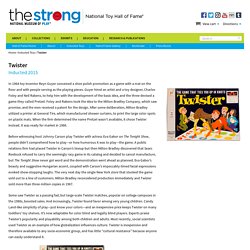 Guyer hired an artist and a toy designer, Charles Foley and Neil Rabens, to help him with the development of the basic idea, and the three devised a game they called Pretzel. Foley and Rabens took the idea to the Milton Bradley Company, which saw promise, and the men received a patent for the design. After some deliberation, Milton Bradley utilized a printer at General Tire, which manufactured shower curtains, to print the large color spots on plastic mats. When the firm determined the name Pretzel wasn’t available, it chose Twister instead. It was ready for market in 1966. Before witnessing host Johnny Carson play Twister with actress Eva Gabor on The Tonight Show, people didn’t comprehend how to play—or how humorous it was to play—the game. History of Nerf from Reyn Guyer Creative Group.pdf. How Nerf Became the World’s Best Purveyor of Big Guns for Kids.

The challenge came from on high, communicated during an otherwise ordinary product meeting in a long brick building in the old factory town. 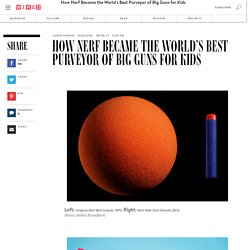 At first, Brian Jablonski couldn’t believe what his bosses were asking him to do. But he would have to find a way. Jablonski is tall and lanky with a goatee. A Brief History of Nerf (or Nothin') The Nerf brand has been bringing kids foamy fun for over four decades now, but the company’s history might not be as familiar to you as the perfect technique for a crushing Nerfoop dunk. 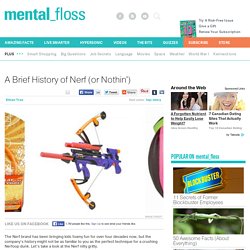 Let’s take a look at the Nerf nitty gritty. It Was Supposed to Be a Volleyball Game Although Nerf has become the leading name in spongy backyard warfare, its roots were decidedly less violent. Inventor Reyn Guyer had enjoyed early success by creating the game Twister, and in 1968 he started Winsor Concepts to dream up new toy and game ideas. While working on a caveman-themed game, one of Guyer’s team members began bouncing one of the game’s foam “rocks” over a net. 15 Awesome NERF Facts - NERF Trivia, Facts, And History. National Toy Hall of Fame. Just after World War II, three Minnesotans who wanted to manufacture garden tools founded Mound Metalcraft in the basement of a local schoolhouse. 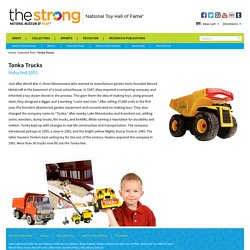 In 1947, they acquired a competing company and inherited a toy steam shovel in the process. This gave them the idea of making toys. Using pressed steel, they designed a digger and a working “crane and clam.” A Thumbnail Look At Tonka History. Tonka Corporation. Tonka Corporation began in 1947 as Mound Metalcraft Incorporated. 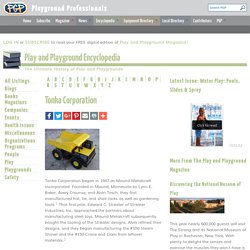 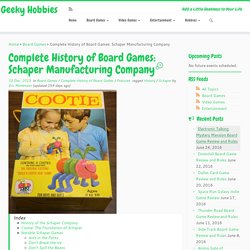 W.H. Schaper was a mailman from Minneapolis who loved making fishing lures. One day as he was designing a new lure he created a creature that he would eventually use for his first and most famous game Cootie.