J.R.R. Tolkien Encyclopedia: Scholarship and Critical Assessment/List of Articles. The Lord of the Rings on Prime Video. Category:Images by J.R.R. Tolkien. J.R.R. Tolkien's Little-Known Original Drawings for the First Edition of The Hobbit. By Maria Popova In October of 1936, J.R.R. 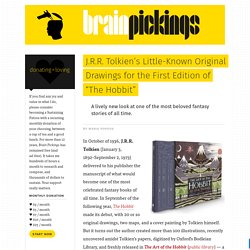 Tolkien (January 3, 1892–September 2, 1973) delivered to his publisher the manuscript of what would become one of the most celebrated fantasy books of all time. In September of the following year, The Hobbit made its debut, with 20 or so original drawings, two maps, and a cover painting by Tolkien himself. But it turns out the author created more than 100 illustrations, recently uncovered amidst Tolkien’s papers, digitized by Oxford’s Bodleian Library, and freshly released in The Art of the Hobbit (public library) — a magnificent volume celebrating the 75th anniversary of The Hobbit with 110 beautiful, many never-before-seen illustrations by Tolkien, ranging from pencil sketches to ink line drawings to watercolors.

It’s a fine addition to this omnibus of famous creators’ little-known talents, and a priceless piece of literary history. Who is Tom Bombadil? Brilliant illustrations bring this 1976 Soviet edition of 'The Hobbit' to life. The Hobbit Habit: Reading “The Lord of the Rings” Quenuvalye i lamber Eldareva? 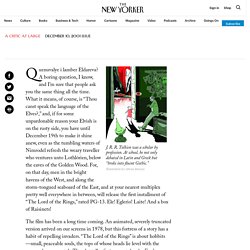 A boring question, I know, and I’m sure that people ask you the same thing all the time. What it means, of course, is “Thou canst speak the language of the Elves? ,” and, if for some unpardonable reason your Elvish is on the rusty side, you have until December 19th to make it shine anew, even as the tumbling waters of Nimrodel refresh the weary traveller who ventures unto Lothlórien, below the eaves of the Golden Wood. Weeklystandard. In 1975, Christopher Tolkien left his fellowship at New College, Oxford, to edit his late father’s massive legendarium. 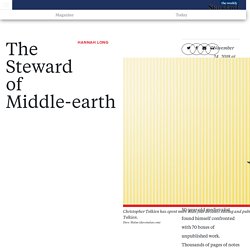 The prospect was daunting. The 50-year-old medievalist found himself confronted with 70 boxes of unpublished work. Thousands of pages of notes and fragments and poems, some dating back more than six decades, were stuffed haphazardly into the boxes. Handwritten texts were hurriedly scrawled in pencil and annotated with a jumble of notes and corrections. Listen to rare recordings of J.R.R. Tolkien reading ‘The Lord of the Rings’ Each year on March 25, Tolkien fans around the world mark the day by reading one of the many works penned by the popular Catholic author. 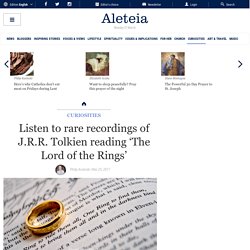 According to the Tolkien Society, the annual event “has been organised by the Tolkien Society since 2003 to encourage fans to celebrate and promote the life and works of J.R.R. Tolkien by reading favorite passages.” Walking Into Mordor: Middle Earth As A Google Map. Oldest and Fatherless: The Terrible Secret of Tom Bombadil - Loose Connections. (This is another of my speculative pieces and nothing to do with Star Wars. 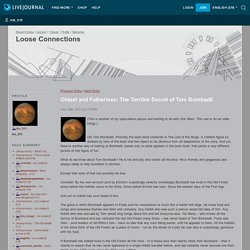 This one is for an older trilogy.) Old Tom Bombadil. JRR Tolkien: 'Film my books? Its easier to film the Odyssey' Tolkien's annotated map of Middle-earth discovered inside copy of Lord of the Rings. A recently discovered map of Middle-earth annotated by JRR Tolkien reveals The Lord of the Rings author’s observation that Hobbiton is on the same latitude as Oxford, and implies that the Italian city of Ravenna could be the inspiration behind the fictional city of Minas Tirith. 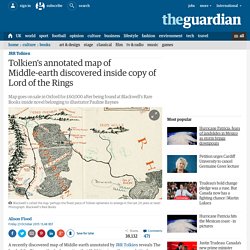 The map was found loose in a copy of the acclaimed illustrator Pauline Baynes’ copy of The Lord of the Rings. Baynes had removed the map from another edition of the novel as she began work on her own colour Map of Middle-earth for Tolkien, which would go on to be published by Allen & Unwin in 1970. TolkienBooks.net - The Home of An Illustrated Tolkien Bibliography. Why Tolkien Isn’t a Conservative. A while ago, I was involved in a debate about Tolkien, centring around whether he was simply putting forward a simplistically conservative morality in his work – a surprisingly common accusation. 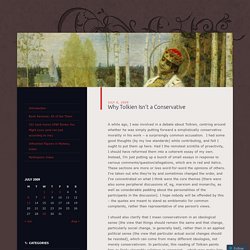 I had some good thoughts (by my low standards) while contributing, and felt I ought to put them up here. Had I the remotest scintilla of proactivity, I should have reformed them into a coherent essay of my own. Instead, I’m just putting up a bunch of small essays in response to various comments/question/allegations, which are in red and italics. These sections are more or less word-for-word the opinions of others. I’ve taken out who they’re by and sometimes changed the order, and I’ve concentrated on what I think were the core themes (there were also some peripheral discussions of, eg, marxism and monarchy, as well as considerable padding about the personalities of the participants in the discussion). On change and how it’s represented in LotR: I’ve read the books a few times now. 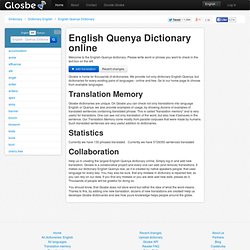 Please write word or phrase you want to check in the text box on the left. add translation Glosbe is home for thousands of dictionaries. We provide not only dictionary English-Quenya, but dictionaries for every existing pairs of languages - online and free. Go to our home page to choose from available languages. Translation Memory Glosbe dictionaries are unique. Statistics Currently we have 130 phrases translated. Collaboration. Gene Wolfe On Tolkien. By Gene Wolfe There is one very real sense in which the Dark Ages were the brightest of times, and it is this: that they were times of defined and definite duties and freedoms. 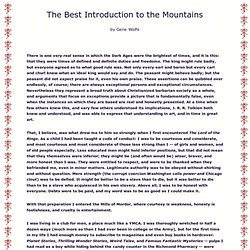 The king might rule badly, but everyone agreed as to what good rule was. Not only every earl and baron but every carl and churl knew what an ideal king would say and do. The peasant might behave badly; but the peasant did not expect praise for it, even his own praise. These assertions can be quibbled over endlessly, of course; there are always exceptional persons and exceptional circumstances. That, I believe, was what drew me to him so strongly when I first encountered The Lord of the Rings.