RAAF Base Richmond. RAAF Base Richmond (IATA: XRH, ICAO: YSRI) is one of Australia's oldest and largest air force bases.[2] It is located within the City of Hawkesbury in the north-western fringe of Sydney, New South Wales, between the towns of Windsor and Richmond. 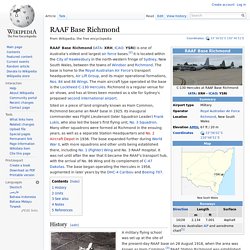 The base is home to the Royal Australian Air Force's transport headquarters, Air Lift Group, and its major operational formations, Nos. 84 and 86 Wings. The main aircraft type operated at the base is the Lockheed C-130 Hercules. Richmond is a regular venue for air shows, and has at times been mooted as a site for Sydney's proposed second international airport. Sited on a piece of land originally known as Ham Common, Richmond became an RAAF base in 1925. Its inaugural commander was Flight Lieutenant (later Squadron Leader) Frank Lukis, who also led the base's first flying unit, No. 3 Squadron. History[edit] No. 54 Squadron Spitfire pilots, Richmond, 1942 No. 86 Wing Dakotas during a fly-past in 1952. RAAF Williams. RAAF Base Williamtown. History[edit] RAAF Station Williamtown was established on 15 February 1941 to provide protection for the strategic port and steel manufacturing facilities of the Hunter Region.[2] The base was initially served by four runways, each 1,100 m (3,600 ft) in length to meet the needs of the Williamtown Flying School. 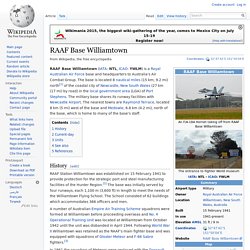 The School consisted of 62 buildings which accommodates 366 officers and men. A number of Australian Empire Air Training Scheme squadrons were formed at Williamtown before proceeding overseas and No. 4 Operational Training Unit was located at Williamtown from October 1942 until the unit was disbanded in April 1944. Fairbairn, Canberra. Canberra International Airport. Canberra International Airport (IATA: CBR, ICAO: YSCB), now trading as Canberra Airport, is the airport serving Australia's capital city, Canberra, the nearby city of Queanbeyan, NSW and the surrounding regional area of South-Eastern New South Wales. 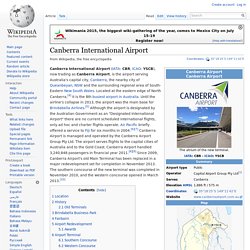 Located at the eastern edge of North Canberra,[4] it is the 8th busiest airport in Australia. Until the airline's collapse in 2013, the airport was the main base for Brindabella Airlines.[5] Although the airport is designated by the Australian Government as an "Designated International Airport" there are no current scheduled international flights, only ad hoc and charter flights operate. Air Pacific briefly offered a service to Fiji for six months in 2004.[6][7] Canberra Airport is managed and operated by the Canberra Airport Group Pty Ltd. 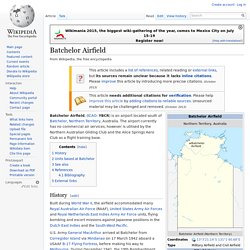 U.S. Army General MacArthur arrived at Batchelor from Corregidor Island via Mindanao on 17 March 1942 aboard a USAAF B-17 Flying Fortress, before making his way to Melbourne. The Americans created their own "tent town" at Batchelor, and tried to make life as comfortable as possible. Many Americans traded food items for native souvenirs and learned the curious pidgin English that flavoured the aboriginal dialect. 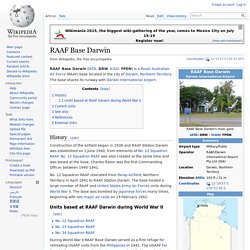 The base shares its runway with Darwin International Airport. History[edit] Construction of the airfield began in 1938 and RAAF Station Darwin was established on 1 June 1940, from elements of No. 12 Squadron RAAF. No. 12 Squadron RAAF relocated from Parap Airfield, Northern Territory in April 1941 to RAAF Station Darwin. RAAF Base Townsville. RAAF Base Townsville (IATA: TSV, ICAO: YBTL) (formerly RAAF Base Garbutt) is a Royal Australian Air Force base which houses a squadron of light transport aircraft, and is used for training purposes by combat aircraft. 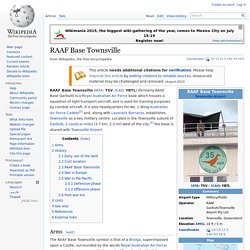 It is also headquarters for No. 1 Wing Australian Air Force Cadets[2] and, along with Lavarack Barracks, establishes Townsville as a key military centre. RAAF Base Amberley. History[edit] The need for an RAAF base in Brisbane was identified in the 1930s. 882 acres (357 ha) of land near Ipswich was gazetted for defence purposes on 12 December 1938. 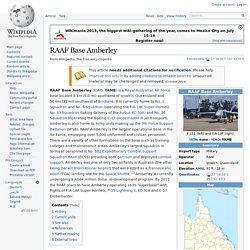 The base was initially planned to house a general purpose squadron with 300 officers and men. At the outbreak of World War II the handful of brick buildings were still incomplete and many extra buildings were constructed quickly using wood and fibro. The base opened in June 1940 with the first unit based there being No. 24 Squadron. From May 1942 the base changed roles from flying operations to mainly assembly and repair of aircraft. Bradley International Airport. Bradley International Airport (IATA: BDL, ICAO: KBDL, FAA LID: BDL) is a public and military use airport in Windsor Locks on the border with East Granby and Suffield, in Hartford County, Connecticut, United States. 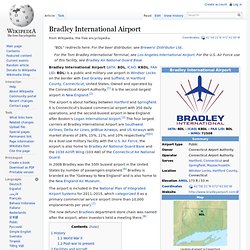 Owned and operated by the Connecticut Airport Authority,[1] it is the second-largest airport in New England.[2] The airport is about halfway between Hartford and Springfield. It is Connecticut's busiest commercial airport with 350 daily operations, and the second-busiest airport in New England after Boston's Logan International Airport.[3] The four largest carriers at Bradley International Airport are Southwest Airlines, Delta Air Lines, JetBlue Airways, and US Airways with market shares of 28%, 15%, 11%, and 10% respectively.[4][5] As a dual-use military facility with the U.S. RAAF Base Wagga. RAAF Base Wagga (formerly RAAF Base Forest Hill) is located 5.8 nautical miles (10.7 km; 6.7 mi) southeast[1] of the New South Wales town of Wagga Wagga, in the suburb of Forest Hill. 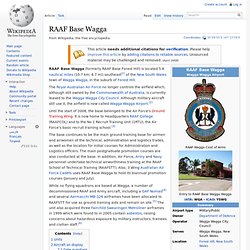