Solar-Powered Device Pulls Water Out of Thin (And Pretty Dry) Air. A new device draws liters of water out of air, even in desert-like climates. 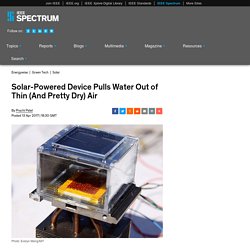 And unlike that electric dehumidifier you might have running in your basement, it runs on the sun’s warmth. If it can be made at a low cost, the system could be used to provide potable water for the millions facing clean water shortages in developing countries and arid regions. One in 10 people today still lack access to safe drinking water, according to the World Health Organization. Almost half of the people getting water from unprotected sources live in sub-Saharan Africa, and eight in 10 live in rural areas. Many of these countries can’t afford the cost of desalination even if they are near large water bodies. The new device traps moisture at 20 percent relative humidity, which is the level common in arid areas and deserts of the world. The system is based on highly porous materials known as metal-organic framework, which were invented by Yaghi. 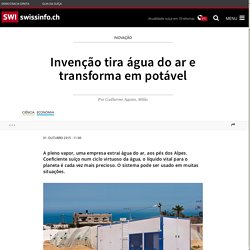 WaterSeer™ Yoga Nidra. Top Brain waves are at Delta Correlation with brain waves: While the goal of Yoga Nidra is spiritual insight and experience, not just to change the physical brain activity, there is some correlation with the brain wave patterns, as is summarized in the following: Relaxation may come first: When first practicing Yoga Nidra, there is a good chance that one might not experience Yoga Nidra itself. 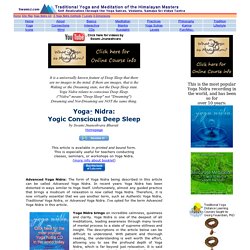 The practices might be very relaxing, with brain waves slowing from Beta to Alpha or Theta, but not slowing to the Delta level. Or, the other possibility that often happens initially, is that one falls asleep into the Delta level, losing conscious awareness, and thus not experiencing true Yoga Nidra. Be patient: It is important to be very patient over time in practicing Yoga Nidra. Delta brainwaves, not Alpha: There has been some degree of confusion circulating about Yoga Nidra and brain waves. Yoga Nidra and parachuting Methods are preparation: Think of parachuting.

Can Drinking Water Be Produced from Thin Air? Yes, and It Is Happening Right Here in India! In a country where women often have to walk miles to find and collect drinking water for their families, the WaterMaker project to produce water from thin air is no less than magical. 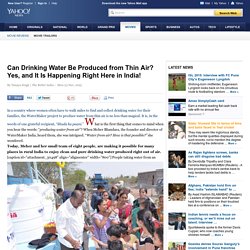 It is, in the words of one grateful recipient, “khuda ka paani.”What is the first thing that comes to mind when you hear the words: “producing water from air”? When Meher Bhandara, the founder and director of WaterMaker India, heard them, she was intrigued. “Water from air? How is that possible?” She wondered. Most groundwater is effectively a non-renewable resource, study finds. The water that supplies aquifers and wells that billions of people rely on around the world is, from a practical perspective, mostly a non-renewable resource that could run out in many places, a new Canadian-led study has found. 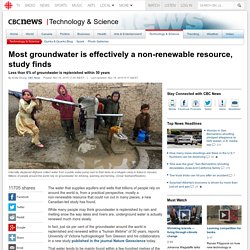 While many people may think groundwater is replenished by rain and melting snow the way lakes and rivers are, underground water is actually renewed much more slowly. In fact, just six per cent of the groundwater around the world is replenished and renewed within a "human lifetime" of 50 years, reports University of Victoria hydrogeologist Tom Gleeson and his collaborators in a new study published in the journal Nature Geoscience today. That water tends to be mainly found within a few hundred metres of the surface, where it is most vulnerable to being contaminated by pollution or depleted by higher temperatures and reduced rainfall as a result of climate change, the researchers found. Nuclear clues His team came up with almost exactly the same number. 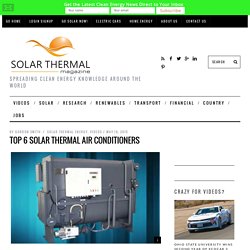 Although there are numerous kinds of solar thermal air-conditioner systems, those that drive closed-loop absorption chillers are the most efficient. ClimateWell AB. Conquering the Solar Thermal Air Conditioning and Heating Market in China. The solar thermal market in China is by far the world’s largest with more than 80% share of the global market and some 50 million m2solar collectors sold every year. 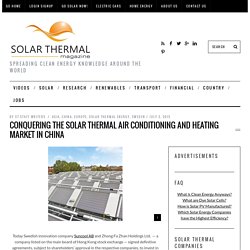 The technology exclusively acquired by ZFZ enables the manufacturing of solar collectors that cannot only produce heating and hot tap water, but also directly supply air conditioning. Target customers include hotels, hospitals and other commercial buildings as well as the residential sector and distributors of solar powered solutions. The new operating company will be established in Yuyao (Zhejiang province) with active support from the local government. Furthermore, the new venture will receive strategic and operational advisory support from the China Energy Conservation and Environmental Protection Group (CECEP), through its multi-national vehicle China-UK Low Carbon Enterprise (CULCE). 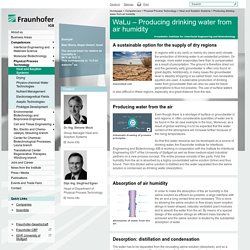 The distillation is effected by means of gravity-assisted, multiple-stage vacuum evaporation. To do this, the saline solution, diluted with water, is subjected to a vacuum, which considerably reduces the evaporation temperatures. The advantage of this is that these temperatures can be achieved with simple solar thermal collectors or also with waste heat. Since the plant works with a negative pressure, it is also possible to use the thermal energy employed several times in various evaporation stages with different pressures. The water vapor produced in the distillation is condensed and can be used as high-quality drinking water. A combined tower-construction for the sorption and desorption makes it possible to use the gravity of the process flows to create the required vacuum. Cooling and Dehumidifying Air.