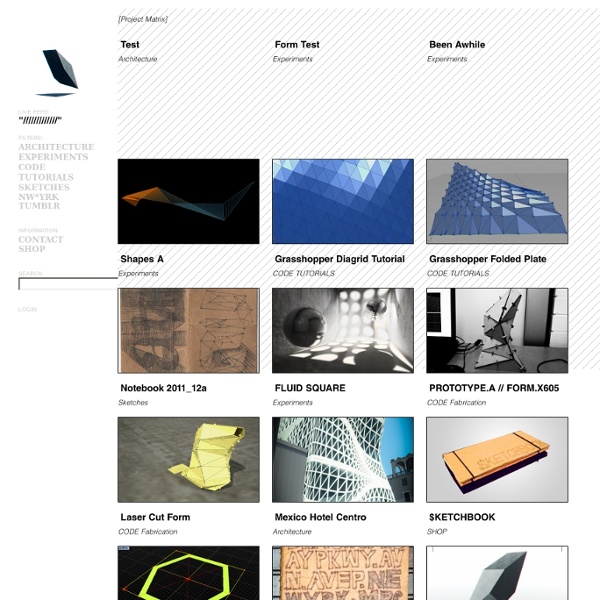 Math Practice / E Roon Kang People's Design Library HUD- Office of Manufactured Housing Programs The Office of Manufactured Housing (MHS) administers the National Manufactured Housing Construction and Safety Standards Act of 1974 (the Act). This Act authorizes HUD to establish federal standards for the design and construction of manufactured homes to assure quality, durability, safety, and affordability. HUD standards may preempt state and local laws that do not conform to the HUD standards. The Office enforces standards directly or through state agencies, inspects factories and retailer lots, regulates installation standards for the homes, administers a dispute resolution program for defects, establishes and collects a fee for each home built, authorizes a "HUD Label" to be placed on homes that meet the HUD standards, and pursues a civil or criminal action for violations of the Act. Highlights:

Shukhov Tower on the Oka River The only presently standing Shukhov Tower built for the power line crossing, after its twin was destroyed – 2006 The two 128-meter towers in 1988, shortly before the power line was decommissioned a year later. The Shukhov Tower on the Oka River (also Dzerzhinsk High-Voltage Mast, Shukhov Oka Tower) is the world’s only diagrid hyperboloid transmission tower. History[edit] The Shukhov Tower was a part of a 110kV three-phase AC transmission line crossing the Oka River commissioned between 1927 and 1929. In 1989, the power line was rerouted and the 20 and 68 metre pylons were dismantled. Structure[edit] The Shukhov Tower consists of five 25-metre (82 ft) steel lattice hyperboloid sections, stacked on top of each other. Present condition[edit] RAO UES, Russia's electricity company, used Shukhov's unique constructions for 70 years. Non-hyperboloid pylons of similar design can be seen near Cádiz, Spain. See also[edit] External links[edit] (English) (German) (Italian) "Vladimir G. (Russian) (Chinese)

The Proving Ground by Nathan Miller Oskar Schlemmer Oskar Schlemmer (4 September 1888 – 13 April 1943) was a German painter, sculptor, designer and choreographer associated with the Bauhaus school. In 1923 he was hired as Master of Form at the Bauhaus theatre workshop, after working some time at the workshop of sculpture. His most famous work is "Triadisches Ballett," in which the actors are transfigured from the normal to geometrical shapes. Also in Slat Dance and Treppenwitz, the performers' costumes make them into living sculpture, as if part of the scenery. Biography[edit] Childhood and apprenticeships[edit] Born in September 1888 in Stuttgart, Oskar Schlemmer was the youngest of six children. The Bauhaus years[edit] In 1919 Schlemmer turned to sculpture and had an exhibition of his work at the Gallery Der Sturm in Berlin. Schlemmer became known internationally with the première of his 'Triadisches Ballett' in Stuttgart in 1922. Life and death under the Third Reich[edit] Legacy[edit] Controversy[edit] Art market[edit] References[edit]

Free Vector Graphics & Art Design Blog AJBL Make Any Dead URL Work Again | DeadURL.com Sisters are Building it for Themselves: How the Victoria Mxenge women changed the housing game Figures recently released by the City of Cape Town show that the number of shack fires which occurred in the Western Cape in 2014 reached just under 8,000, almost double the previous year’s 4,832. At least 20 people died in these fires, with countless others left homeless. Those numbers are a reminder of how perilous shack living can be, as well as testament to the housing backlog in a rapidly-expanding city. It’s a housing crisis that has been brewing for well over two decades, spawning frustration and protest, but also innovation. It started with a small group of women, most of whom who had come to Cape Town from the rural Eastern Cape. The woman at their helm was Patricia Matolengwe, whom Ismail met for the first time in 1994. The thrust of their solution was based on something that has been observed internationally: the potential benefits that can spring from giving poor women, specifically, micro-finance. Matolengwe returned to Cape Town with a project in mind.

Africa Past & Present | The Podcast about African History, Culture, and Politics | Page 2 Hikabwa Decius Chipande (PhD 2015 Michigan State) on the political and social history of football (soccer) in Zambia. He discusses becoming an historian; the game’s relationship with British colonizers, the copper mines, and postcolonial governments; and the archival research and oral interviewing process. Chipande concludes with insights from his extensive experience with sport development in Africa. Boycotting South African goods, San Francisco, 1962. Used by permission of ILWU. Peter Cole (Western Illinois, SWOP [Wits]) compares Durban and San Francisco, maritime union solidarities, the anti-apartheid movement, and technological change in the two ports. Menán Du Plessis (Stellenbosch University and U. of Kentucky) on her literary work, research on the Kora! Part I of a series on digital African studies. Abdilatif Abdalla is the best-known Swahili poet and independent Kenya’s first political prisoner. With guest host Ann Biersteker. Photo courtesy of Pius Adesanmi

Computational Design Italy DIY Architecture: First WikiHouses Built - The Pop-Up City - Waterfox It was one year ago that we brought you news of WikiHouse, the innovative open-source concept for housebuilding from London-based design team 00:/ (zero zero). The idea is to bring house design and construction to the masses through open-source designs that use easy-to-assemble CNC cutouts from standard sheets of plywood. Anyone can contribute designs, download models (that can generate code for CNC cutting) and assemble the components with minimal training or skill. We’ve already seen IKEA dabble in urbanism. Imagine if they were to offer flat-packaged self-assembly houses — you would probably get something very much like a WikiHouse! Eight prototypes have been constructed so far, including two zero-bolts designs, which reduce assembly time. WikiHouse uses designs and modeling software (Google Sketchup) that are free to the public.