The machine always wins: what drives our addiction to social media. We are swimming in writing. 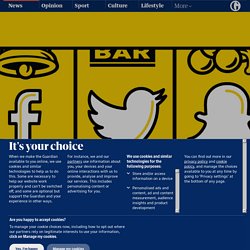 Our lives have become, in the words of the author and academic Shoshana Zuboff, an “electronic text”. Social media platforms have created a machine for us to write to. The bait is that we are interacting with other people: our friends, colleagues, celebrities, politicians, royals, terrorists, porn actors – anyone we like. We are not interacting with them, however, but with the machine. We write to it, and it passes on the message for us after keeping a record of the data. The machine benefits from the “network effect”: the more people write to it, the more benefits it can offer, until it becomes a disadvantage not to be part of it.

What is the incentive to engage in writing like this for hours each day? Less Tweeting, More Doing - Outside - Pocket. Photo from FPG/Hulton Archive/Getty. 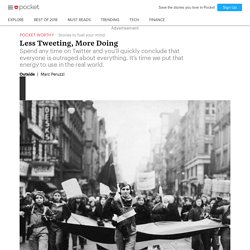 When words failed him, George Orwell stopped writing and took a bullet in the neck. As an essayist in the 1930s, Orwell tried to motivate Great Britain to fight fascism in Spain so the world wouldn’t have to fight fascism on their doorsteps. When his words had no effect, he left his typewriter in pastoral England and took up arms with the democratic/socialist/anti-Stalinist communist resistance in opposition to the fascists/autocratic/theocratic republicans under Franco. (This was perhaps history’s most convoluted civil war.) His cause and his fight were betrayed by Russian operatives seeking to sabotage the resistance through misinformation to prevent democracy from taking hold. Orwell’s words predicted World War II, the Cold War (which he named), and the communist pogroms. Behind Twitter’s Plan To Get People To Stop Yelling At Each Other. SAN FRANCISCO — In March, Twitter cofounder Biz Stone tweeted a screenshot of an iPhone homescreen along with a message: “Notice our new prototype? 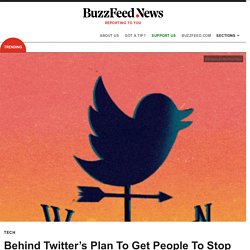 … It’s called ‘twttr.’ The bird flew away from the app icon representing: Simplicity. Blue sky thinking. We’re re-working. Social media can predict what you’ll say, even if you don’t participate. There have been a number of high-profile criminal cases that were solved using the DNA that family members of the accused placed in public databases. 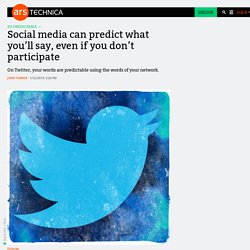 One lesson there is that our privacy isn't entirely under our control; by sharing DNA with you, your family has the ability to choose what everybody else knows about you. Now, some researchers have demonstrated that something similar is true about our words. Using a database of past tweets, they were able to effectively pick out the next words a user was likely to use. But they were able to do so more effectively if they simply had access to what a person's contacts were saying on Twitter. Entropy is inescapable The work was done by three researchers at the University of Vermont: James Bagrow, Xipei Liu, and Lewis Mitchell. The final concept they used is called predictability, which is simply the probability of accurately predicting the next word used. In general, people were fairly predictable.

So predictable You can never leave. Be happier on social media by acting like a 19th-century Parisian. Are you the kind of person who jumps into a fight at a bar even when it doesn’t involve you at all? 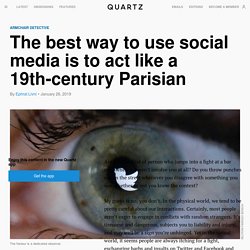 Do you throw punches out on the street whenever you disagree with something you see, whether or not you know the context? My guess is no, you don’t. In the physical world, we tend to be pretty careful about our interactions. Influencers Are Faking Brand Deals. When Allie, a 15-year-old lifestyle influencer who asked to be referred to by a pseudonym, scrolls through her Instagram feed, sometimes the whole thing seems like an ad. There’s a fellow teen beauty influencer bragging about her sponsorship with Maybelline, a high-school sophomore she knows touting his brand campaign with Voss water. None of these promotions, however, is real. Allie is friends with the people posting, so she knows. She once faked a water sponsorship herself.

- The Washington Post. YouTube Videos Keep Getting Longer to Drive Ad Revenue. - The Washington Post. Limiting social media use reduced loneliness and depression in new experiment. The idea that social media can be harmful to our mental and emotional well-being is not a new one, but little has been done by researchers to directly measure the effect; surveys and correlative studies are at best suggestive. 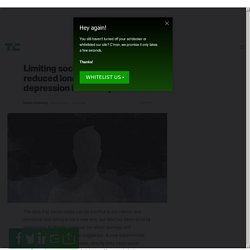 A new experimental study out of Penn State, however, directly links more social media use to worse emotional states, and less use to better. To be clear on the terminology here, a simple survey might ask people to self-report that using Instagram makes them feel bad. A correlative study would, for example, find that people who report more social media use are more likely to also experience depression. An experimental study compares the results from an experimental group with their behavior systematically modified, and a control group that’s allowed to do whatever they want. This study, led by Melissa Hunt at Penn State’s psychology department, is the latter — which despite intense interest in this field and phenomenon is quite rare. The results are clear.