Avoid the Tendency to Think Your Way is the True Way. By Leo Babauta One thing I’ve been noticing in myself over the last few months, and I see other people doing it all the time, is thinking that my way is the right way to do things. 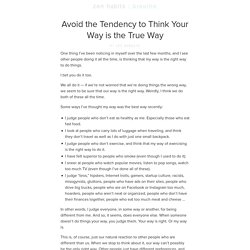 I bet you do it too. We all do it — if we’re not worried that we’re doing things the wrong way, we seem to be sure that our way is the right way. Weirdly, I think we do both of these all the time. Some ways I’ve thought my way was the best way recently: I judge people who don’t eat as healthy as me. In other words, I judge everyone, in some way or another, for being different from me. This is, of course, just our natural reaction to other people who are different than us.

We want diversity. And so I urge you to pay attention to when you are thinking your way is better than someone else’s. How can we drop judgment and embrace curiosity? I’m trying this, and struggling with it, but the struggle is worth it. Martha Graham on the Hidden Danger of Comparing Yourself to Others. 3 Reasons We Should Be Slow to Judge. When I think of key leadership qualities, decisiveness is always high on the list. 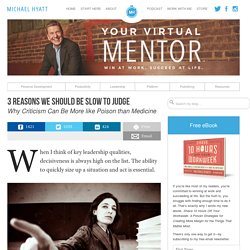 The ability to quickly size up a situation and act is essential. Courtesy of iStock/Klubovy But sometimes we can be too fast. And that’s especially true when it comes to criticism. Every day in America between five hundred and a thousand people die because of medical errors. It’s the same way with criticism. Avoiding a Bad Diagnosis Identifying what’s wrong with a situation—including the attitude and actions of the people involved—is absolutely necessary in business and the rest of our lives. When I launched my mastermind group, for instance, I caught flak for the price. I could see where these people were coming from, but they missed the boat. How We Judge Others is How We Judge Ourselves. I once knew a guy who made a lot of money. 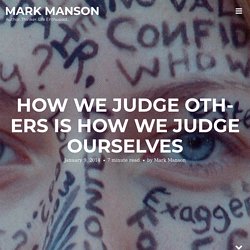 He saw the world as a series of value propositions. Everything from what holiday vacation to take, to which beer to choose at a restaurant, to why certain people liked him or not. If someone was rude to him it was because they were jealous or felt threatened by his power or success. If someone was kind to him it was because they admired his power and success, and in some cases, may be trying to manipulate him to get more access to it. He measured himself through his financial success. I once knew a woman who was beautiful. If someone was rude to her it was because they were intimidated by her beauty or their own lack of beauty. She measured herself through her beauty and attractiveness. I once knew a guy who was a loser. Intuition.

Criticism. Informational Bias. Persuasion. Psychological Projection. Hubris. Resentment. Practicing Non-Judgment. By Leo Babauta We go through our day judging our experiences, other people, ourselves: this is good, this is bad. 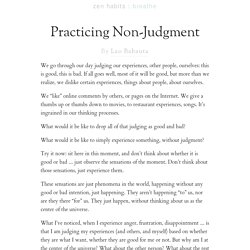 If all goes well, most of it will be good, but more than we realize, we dislike certain experiences, things about people, about ourselves. We “like” online comments by others, or pages on the Internet. We give a thumbs up or thumbs down to movies, to restaurant experiences, songs. It’s ingrained in our thinking processes. What would it be like to drop all of that judging as good and bad? What would it be like to simply experience something, without judgment? Try it now: sit here in this moment, and don’t think about whether it is good or bad … just observe the sensations of the moment.

These sensations are just phenomena in the world, happening without any good or bad intention, just happening. Letting Go of Judging People. By Leo Babauta One of the best changes I’ve made to help me be happier is learning to see judging other people as a red flag. 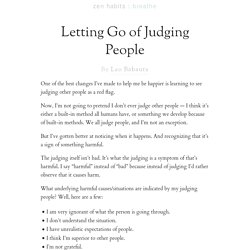 Now, I’m not going to pretend I don’t ever judge other people — I think it’s either a built-in method all humans have, or something we develop because of built-in methods. We all judge people, and I’m not an exception. But I’ve gotten better at noticing when it happens. And recognizing that it’s a sign of something harmful. The judging itself isn’t bad. What underlying harmful causes/situations are indicated by my judging people? Self-Criticism. Alertness. Benevolence.