Gluten and Schizophrenia – The Hammer of Health. The idea that gluten consumption may influence the development of schizophrenia has been the subject of a bit of discussion lately (1). 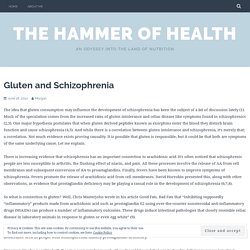 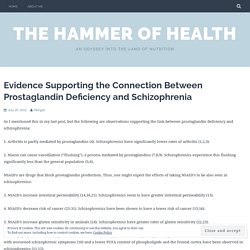 Arthritis is partly mediated by prostaglandins (4). Schizophrenics have significantly lower rates of arthritis (1,2,3). 2. Niacin can cause vasodilation (”flushing”), a process mediated by prostaglandins (7,8,9). NSAID’s are drugs that block prostaglandin production. 3. 4. 5. 6. Broccoli sprout compound may restore brain chemistry imbalance linked to schizophrenia. In a series of recently published studies using animals and people, Johns Hopkins Medicine researchers say they have further characterized a set of chemical imbalances in the brains of people with schizophrenia related to the chemical glutamate. 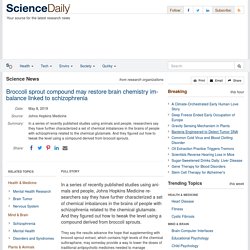 And they figured out how to tweak the level using a compound derived from broccoli sprouts. They say the results advance the hope that supplementing with broccoli sprout extract, which contains high levels of the chemical sulforaphane, may someday provide a way to lower the doses of traditional antipsychotic medicines needed to manage schizophrenia symptoms, thus reducing unwanted side effects of the medicines. Schizophrenia is marked by hallucinations, delusions and disordered thinking, feeling, behavior, perception and speaking. In a study described in the Jan. 9 edition of the journal JAMA Psychiatry, the researchers looked for differences in brain metabolism between people with schizophrenia and healthy controls. Ketosis for Psychosis - Diagnosis:Diet. Folate and Negative Symptoms in Schizophrenia. Source: wikimedia commons Folate, found in meat and leafy greens, is an important vitamin for neuron function. 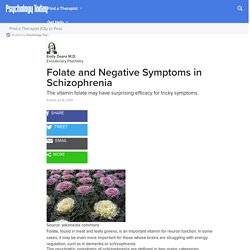 More Links Between Wheat and Schizophrenia. Source: Before the 500 or so generations since the advent of agriculture, no human consumed grains or wheat in any appreciable ongoing amount. 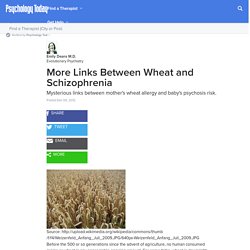 For some folks, wheat is downright poisonous (if you have celiac for example), but most people can tolerate it. However, wheat has several inflammatory issues and dietary antigens that could irritate our guts and our immune systems. Many foods (particularly grains and nuts) have irritating components, however, so a varied diet is typically a good idea. And while certainly no one would suggest wheat is an outright poison to anyone without celiac disease, it does seem reasonable to question whether we should be consuming such a vast amount of our calories as whole grains (link is external). "Nonaffective psychoses" are psychotic disorders not related to major depressive disorder or bipolar disorder (both of which can cause psychotic symptoms during severe episodes). Lest we forget who the enemy is, it is inflammation. Family history Urban. A Tangled Web: Wheat, Schizophrenia, and Infection. Evolutionary Psychiatry: Mom's Wheat Sensitivity and Offspring's Schizophrenia Risk.

In the midst of all the chaos this week came a very interesting diet/mental illness risk paper. 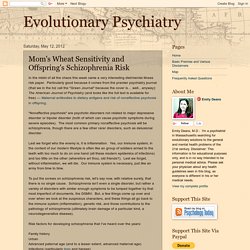 Particularly good because it comes from the premier psychiatry journal (that we in the biz call the "Green Journal" because the cover is… well…anyway): The American Journal of Psychiatry (and looks like the full text is available for free) --- Maternal antibodies to dietary antigens and risk of nonaffective psychosis in offspring. "Nonaffective psychosis" are psychotic disorders not related to major depressive disorder or bipolar disorder (both of which can cause psychotic symptoms during severe episodes). The most common primary nonaffective psychosis will be schizophrenia, though there are a few other rarer disorders, such as delusional disorder. Lest we forget who the enemy is, it is inflammation. To put the screws on schizophrenia risk, let's say now, with relative surety, that there is no single cause. Risk factors for developing schizophrenia that I've heard over the years: Evolutionary Psychiatry: Folate and Negative Symptoms in Schizophrenia.

The psychiatric symptoms of schizophrenia are defined in two major categories, "positive" and "negative. 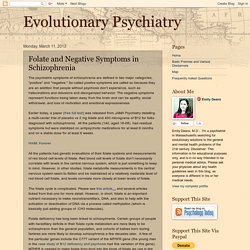 " So-called positve symptoms are called so because they are an addition that people without psychosis don't experience, such as hallucinations and delusions and disorganized behavior. Evolutionary Psychiatry: Gluten and Schizophrenia Again (with an added splash of Toxo!) Researchers have been chasing the elusive links between gluten and major mental illness for decades. 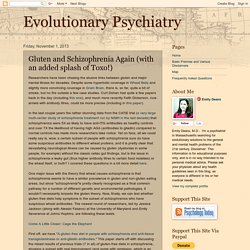 Despite some hyperbolic coverage in Wheat Belly and slightly more convincing coverage in Grain Brain, there is, so far, quite a bit of smoke, but no fire outside a few case studies. Curt Dohan had quite a few papers back in the day (including this one), and much more recently Faith Dickerson, now armed with antibody titres, could be more precise (including in this paper). In the last couple years the rather stunning data from the CATIE trial (a very large multi-center study of schizophrenia treatment run by NIMH in the last decade) that schizophrenics were 5X as likely to have anti-tTG antibodies as healthy controls and over 7X the likelihood of having high AGA (antibodies to gliadin) compared to normal controls has made more researchers take notice.

Come A Little Closer: Cage the Elephant The limitations of this study are profound. Always, more questions than answers. Schizophrenia and Gluten Sensitivity - is there a connection? Are Food Allergies Affecting Your Brain - The link to Schizophrenia Part 3.