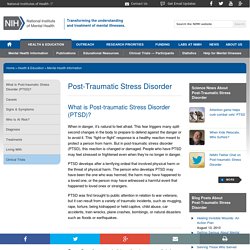 When in danger, it’s natural to feel afraid. This fear triggers many split-second changes in the body to prepare to defend against the danger or to avoid it. This “fight-or-flight” response is a healthy reaction meant to protect a person from harm. But in post-traumatic stress disorder (PTSD), this reaction is changed or damaged. People who have PTSD may feel stressed or frightened even when they’re no longer in danger. PTSD develops after a terrifying ordeal that involved physical harm or the threat of physical harm.

PTSD was first brought to public attention in relation to war veterans, but it can result from a variety of traumatic incidents, such as mugging, rape, torture, being kidnapped or held captive, child abuse, car accidents, train wrecks, plane crashes, bombings, or natural disasters such as floods or earthquakes. Causes Genes. Stathmin, a protein needed to form fear memories. Brain Areas. The Next Steps for PTSD Research. Microsoft PowerPoint - Tasse DSM5 ID definition 5-23-2013 AAIDD 2013 - tasse-dsm5-id-definition-5-23-2013-aaidd-2013.pdf. Suicide. Suicide is the tenth most common cause of death in the United States. 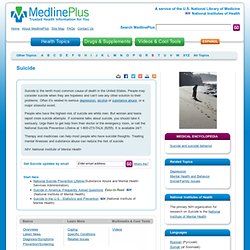 People may consider suicide when they are hopeless and can't see any other solution to their problems. Often it's related to serious depression, alcohol or substance abuse, or a major stressful event. People who have the highest risk of suicide are white men. But women and teens report more suicide attempts. If someone talks about suicide, you should take it seriously. Therapy and medicines can help most people who have suicidal thoughts. Suicide in the U.S.: Statistics and Prevention. Suicide is a major, preventable public health problem. 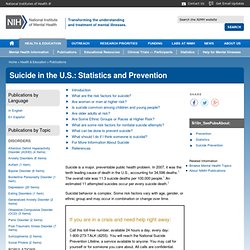 In 2007, it was the tenth leading cause of death in the U.S., accounting for 34,598 deaths.1 The overall rate was 11.3 suicide deaths per 100,000 people.1 An estimated 11 attempted suicides occur per every suicide death.1 Suicidal behavior is complex. Some risk factors vary with age, gender, or ethnic group and may occur in combination or change over time. If you are in a crisis and need help right away: Call this toll-free number, available 24 hours a day, every day: 1-800-273-TALK (8255). What are the risk factors for suicide? Research shows that risk factors for suicide include: Patient Health Questionnaire (PHQ-9) - PHQ - Questions.pdf. Tool_phq2.pdf. PG_Depression3e.book(PG_Depression_3e00Pre.fm) - PG_Depression3rdEd.pdf. APA DSM-5. Online Assessment Measures. DSM-5: Changes to the Diagnostic and Statistical Manual of Mental Disorders. Diagnostic and Statistical Manual of Mental Disorders (DSM) is the standard classification of mental disorders used by mental health professionals in the United States. It contains a listing of diagnostic criteria for every psychiatric disorder recognized by the U.S. health care system. En Español: Revisions Published in 2013 The American Psychiatric Association has announced that DSM-5, the new edition of the Diagnostic and Statistical Manual of Mental Disorders, incorporates significant scientific advances in more precisely identifying and diagnosing mental disorders. DSM-5 provides a common language for patients, caregivers, and clinicians to communicate about the disorders.

Some of the categories for anxiety disorders have changed. Download fact sheets about the disorders from the American Psychiatric Association. Anxiety and Depression Refinements Much has remained the same in the areas of anxiety and depression, with refinements of criteria and symptoms across the lifespan. The Future of Diagnosing with the DSM-5. NIMH · Home. Electronic Preventive Services Selector (ePSS) Recommendations for Adults (USPSTF) Mental Disorders in PC - WHO 1998. Mental Health Care Services by Family Physicians (Position Paper) While psychiatric professionals are an essential element of the total health care continuum, the majority of patients with mental health issues will continue to access the health care system through primary care physicians. 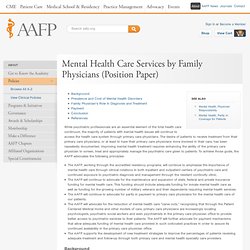 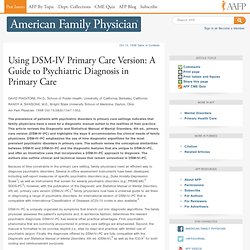 SANSONE, M.D., Wright State University School of Medicine, Dayton, Ohio Am Fam Physician. 1998 Oct 15;58(6):1347-1352. The prevalence of patients with psychiatric disorders in primary care settings indicates that family physicians have a need for a diagnostic manual suited to the realities of their practice. Because of time constraints in the primary care setting, family physicians need an efficient way to diagnose psychiatric disorders. DSM-IV–PC is uniquely organized by symptoms that branch out into diagnostic algorithms. This article summarizes the salient organizational features in DSM-IV–PC and illustrates how the manual's format for differential psychiatric diagnosis can be useful to family physicians.