Most populous cities. Barcelona City Council  2-Acre Vertical Farm Run By AI And Robots Out-Produces 720-Acre Flat Farm. How Dutch Cities Are Creating More Green Space. Walk down a block in any neighborhood of Rotterdam and chances are it will look greener than just a few months ago. 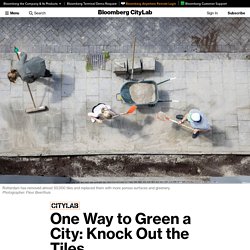 Tiles that once lined the front gardens of many apartment buildings, homes and offices have been ripped out and replaced with plants, bushes and trees. It’s a small but notable shift to the streetscape in a country with an affinity for tiled gardens. And it’s no coincidence this change came en masse. It was part of a green initiative that channeled an age-old rivalry between two Dutch cities. The Economist – Posts. The coronavirus is bringing back the idea of 15-minute cities. One result of our sustained stay-at-home situation is a heightened interest in staying close to home even after the pandemic subsides. 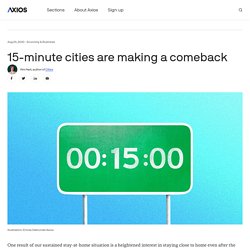 Enter the 15-minute city, a "complete neighborhood" that centers around the idea that residents can meet most of their daily needs by walking or bicycling a short distance — i.e., 15 to 20 minutes — from their homes. Why it matters: Strategically clustering food outlets, doctors' offices, schools, pharmacies, banks, smaller-scale offices and places for recreation in a close proximity to the people who need them can shrink the "deserts" of essential services in distressed neighborhoods.

15-Minute City. Welcome to the 15-minute city. How Disaster Shaped the Modern City. On December 16, 1835, New York’s rivers turned to ice, and Lower Manhattan went up in flames. 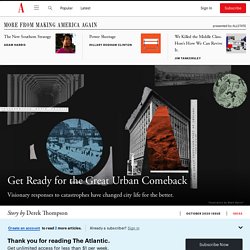 Smoke had first appeared curling through the windows of a five-story warehouse near the southern tip of Manhattan. Icy gales blew embers into nearby buildings, and within hours the central commercial district had become an urban bonfire visible more than 100 miles away. To hear more feature stories, get the Audm iPhone app. Biodiversity Loss Could Be Making Us Sick — Here’s Why – BRINK – News and Insights on Global Risk. Pollution can affect the urban microbiome. 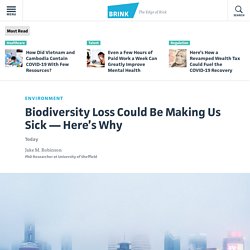 Air pollutants can alter pollen so that it’s more likely to cause an allergic reaction. By 2050, 70% of the world’s population is expected to live in towns and cities. Urban living brings many benefits, but city dwellers worldwide are seeing a rapid increase in noncommunicable health problems, such as asthma and inflammatory bowel disease. Some scientists now think this is linked to biodiversity loss, the ongoing depletion of the varied forms of life on Earth.

The rate at which different species go extinct is currently a thousand times higher than the historical background rate. Why Are America’s Three Biggest Metros Shrinking? There’s little mystery about where people are heading, or why: They are mostly moving toward sun and some semblance of affordability. 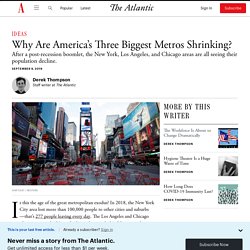 The major Texas metros—Houston, Dallas, San Antonio, and Austin—have collectively grown by more than 3 million since 2010. The most popular destinations for movers are now Phoenix, Dallas, and Las Vegas, which welcome more than 100,000 new people each year. Until recently, domestic out-migration was counteracted by international immigration. From 2010 to 2018, immigration accounted for more than 100 percent of population growth in the New York, Chicago, and Philadelphia metros, and more than 80 percent of population growth in the Los Angeles and Boston areas, according to analysis by the Brookings Institution demographer William Frey.

How the twin disasters of climate change and Covid-19 could transform our cities. It’s often been said that we’re living through an unprecedented moment. 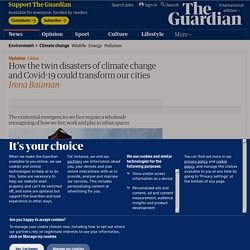 But in city centres, the coronavirus crisis has merely accelerated trends that have been unfolding for some time. In Leeds, where I live, many major banks and building societies, cinemas, shops and department stores declined or disappeared as society shifted online. Fifth of retailers do not plan to reopen after lockdown, MPs told. A fifth of high street stores plan to stay closed permanently after the coronavirus lockdown lifts, retail leaders have told MPs. 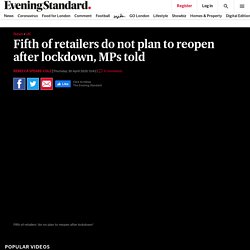 It comes as administrators announced on Thursday that Oasis and Warehouse will close all stores indefinitely with more than 1,800 workers losing their jobs. Even before the pandemic, the British high streets had already been struggling with massive losses over the last few years, seeing brands like Thomas Cook and Mothercare going into administration. Andrew Goodacre, chief executive of the British Independent Retailers Association, said it has been the "worst time ever for retail" after the Covid-19 pandemic hit the UK. Speaking to the Business, Energy and Industrial Strategy Select Committee on Thursday, he said 20 per cent of retailers surveyed by the trade body said they do not intend to reopen after the lockdown.

She told MPs: "There is no way that anybody is expecting that demand will revert to what it was before - there will be a slow gearing back up. Flexible working will be norm after lockdown, say Barclays and WPP bosses. The chief executives of Barclays and WPP are predicting an end to crowded city centre offices and rush hours as flexible working becomes the new normal to keep the workforce healthy amid the Covid-19 crisis. 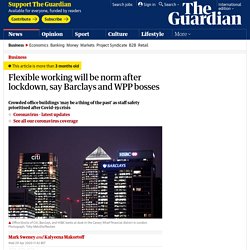 Jes Staley, the chief executive of Barclays, said the bank would look at a more de-centralised approach to staff working, including the prospect of local branches becoming satellite offices for more employees. — SDG Indicators. The world is becoming increasingly urbanized. 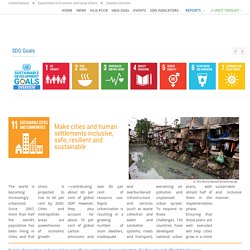 Since 2007, more than half the world’s population has been living in cities, and that share is projected to rise to 60 per cent by 2030. Cities and metropolitan areas are powerhouses of economic growth—contributing about 60 per cent of global GDP. However, they also account for about 70 per cent of global carbon emissions and over 60 per cent of resource use. Rapid urbanization is resulting in a growing number of slum dwellers, inadequate and overburdened infrastructure and services (such as waste collection and water and sanitation systems, roads and transport), worsening air pollution and unplanned urban sprawl. To respond to those challenges, 150 countries have developed national urban plans, with almost half of them in the implementation phase. The proportion of the urban population living in slums worldwide declined by 20 per cent between 2000 and 2014 (from 28 per cent to 23 per cent).

Mayors Tout the '15-Minute City' as Covid Recovery. Collective intelligence and the smart city. The trend for better use of data and technology in our urban environments has been gathering pace, but as 2020's global pandemic took hold we saw new combinations of people, technology and data enable innovative approaches to the crisis. 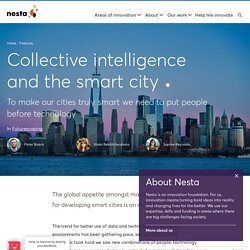 The response to COVID-19 has offered valuable lessons for the use of technology in smart cities. Some studies predict that by 2023 as much as $189 billion will be spent worldwide on smart city initiatives. PERI-CENE project – Co-evolutionary thinking in motion. (Peri-Urbanization & Climate-Environment Change) We are pleased to say this project is now funded and starting in June 2019. We aim to provide a global state of the art knowledge on this huge challenge. The proposal was made to the program ‘Towards a Sustainable Earth’ – details on. Peri-cene. Will Covid kill off the office? The most useless technology is the one you invent but fail to exploit. The Incas invented the wheel, but seem only to have used it on toys. Google employees will work from home until at least summer 2021. Google will keep its employees home until at least next July, the Wall Street Journal reported Monday, marking the largest tech firm to commit to such a timeline in the wake of the coronavirus pandemic.

The chief executive officer of parent company Alphabet Inc, Sundar Pichai, made the decision himself last week after debate among an internal group of top executives that he chairs, according to the report, which cited unnamed insiders. Google did not immediately respond to request for comment. Google had earlier said it would begin reopening more offices globally as early as June this year, but most Google employees would probably work from home until the end of this year. Most tech companies have had employees working remotely since the Covid-19 outbreak escalated in early March, and several have expressed plans to continue such policies indefinitely. Creating City Portraits Methodology. Listen: People Are Panic-Moving. But then you try to square that with what we know about how people have been moving in and out of cities and in and out of different regions of the country in the United States in general over the past five years.

And New York has a pretty high rate of attrition in normal times—when there’s no century-defining disaster going on. You see a wider picture of migration in this country where especially wealthy, mostly white, younger adults move out of the biggest, most expensive cities—San Francisco, New York, L.A. —and toward generally Sun Belt cities: Atlanta, Nashville, Austin. James Hamblin: But the pandemic is going to make people want to be in cars and have yards, right? Mob violence in Indonesia has been aggravated by rapid urbanization and state complicity. Centres of excellence - Covid-19 challenges New York’s future.

Covid-19 sparks exodus of middle-class Londoners in search of the good life. Informal settlements - GSDRC. 68% of the world population projected to live in urban areas by 2050, says UN. Today, 55% of the world’s population lives in urban areas, a proportion that is expected to increase to 68% by 2050. Projections show that urbanization, the gradual shift in residence of the human population from rural to urban areas, combined with the overall growth of the world’s population could add another 2.5 billion people to urban areas by 2050, with close to 90% of this increase taking place in Asia and Africa, according to a new United Nations data set launched today. Demographia World Urban Areas: 2019: Population, Land Area & Urban Densities. The number of international migrants reaches 272 million, continuing an upward trend in all world regions, says UN.

- Figures at a Glance. Six experts on how we'll live, work, and play in cities after COVID-19. Imagining the cities of the future. Urban Resilience: Learnings from COVID-19. An Investing Megatrend: How Rapid Urbanization is Shaping the Future. Urbanization. How the Coronavirus Could Change City Planning. How Smart City Planning Could Slow Future Pandemics. Will Covid spell the end of city life? African Cities — Disrupting the Urban Future - UNDP Innovation - Medium. Designer David Sim makes the case for a "Soft City" Clean air for all: Hedges can halve pollution in playgrounds. Good growth for cities 2019.

Good growth for cities: time to take the long view - Government and Public Services - PwC UK blogs. 2019 Good growth - Government & public sector. Smart cities hold the key to sustainable development. Subscribe to read. Voters could make the world twice as rich. Why don’t they? - Unlock that door. China Icebergs: Forces That Could Reshape the World. How urbanisation displaces Lagos’s fishing families. Space comes at a premium in megacities — community does too. What China Is Really Up To In Africa. Indonesia to move capital from sinking Jakarta. Culture - The five most creative cities in the world? These will be the world's 10 biggest cities in 2050. City Slicker vs. Country Bumpkin: Who Has a Smaller Carbon Footprint? China has highest number of smart city pilot projects: Report. Ikea surveyed thousands of people to design 6 homes of the future. How the media contributed to the migrant crisis.

Urbanization in Latin America BBVA Research. Top 10 List of Largest Cities in the World 2019. CITIES: How could Boston be redesigned to cope with storm surges? Collective Living: New Forms of Affordable Housing for Relocalized Farmers in China on Architizer. The People's Republic of The Future. Connecting the dots: climate change, WPS and youth.

Sustainable infrastructure: remoulding the urban glue - UNOPS. Looking Back on Cape Town's Drought and 'Day Zero' India is building a high-tech sustainable city from scratch. Smart City Market: 2019 Global Survey, Trends, Outlook, Share, Opportunities, Industry Segments and Growth by Forecast to 2022. The 11 cities most likely to run out of drinking water - like Cape Town. Soga_2019_report. Is Africa’s present ready for its future? – A Trend Report for Hoteliers. Commons report on migration. How dire climate displacement warnings are becoming a reality in Bangladesh. The Miracle of Minneapolis. How cities like Detroit and Pittsburgh can new tech hubs?