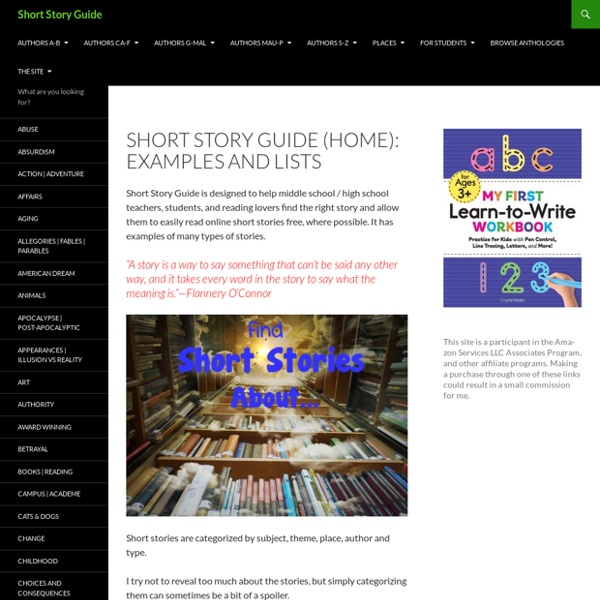 A Beneficiary Caches of old papers are like graves; you shouldn’t open them. Her mother had been cremated. There was no marble stone incised “Laila de Morne, born, died, actress.” She had always lied about her age; her name, too—the name she used wasn’t her natal name, too ethnically limiting to suggest her uniqueness in a cast list. It wasn’t her married name, either. She had baptized herself, professionally. Very Short Stories for Middle and High School Students to Read Online Howard is an avid short story reader who likes to help others find and understand stories. If your students are struggling to get into the short story, or you're pressed for time, here are some very brief stories to get you started. They're not as short as Hemingway's famous six-word story (For sale: baby shoes, never worn.), but they're manageable even for reluctant readers. Most are under 2,000 words; I've included an approximate word count where I could. If you want to be able to reference a print edition at your leisure, one of my favorites is "Little Worlds" (Amazon).

Best Short Stories for Middle Schoolers, As Chosen by Teachers It can be a challenge to get middle schoolers interested in reading. The thought of tackling a thick novel can be overwhelming, especially during distance learning. Short stories are always a great choice. In addition to requiring less of a time commitment, they are an easy way to expose your students to new authors and genres. Also, the best short stories are every bit as engaging and meaningful as the best novels. Symbols and Signs For the fourth time in as many years, they were confronted with the problem of what birthday present to take to a young man who was incurably deranged in his mind. Desires he had none. Man-made objects were to him either hives of evil, vibrant with a malignant activity that he alone could perceive, or gross comforts for which no use could be found in his abstract world.

National Literacy Trust Edited by Katherine Rundell, with contributions from more than 100 children’s writers and illustrators This extraordinary collection of short stories, poems, essays and pictures has contributions from more than 110 children’s writers and illustrators, including Lauren Child, Anthony Horowitz, Greg James and Chris Smith, Michael Morpurgo, Liz Pichon, Axel Scheffler, Francesca Simon and Jacqueline Wilson. The collection, published by Bloomsbury, is dedicated to the doctors, nurses, carers, porters, cleaners and everyone working in hospitals. The Book of Hopes is available as a beautiful hardback gift edition, with 23 never-seen-before stories, poems and illustrations. The Book of Hopes is available to buy now from all good book retailers. A donation from the sale of each book will go to NHS Charities Together, in gratitude for the incredible efforts of all those who worked in hospitals over the quarantine period.

FORESHADOW: A Serial YA Anthology “I loved Joanna Truman’s ‘Glow’ so much! Knockout writing and romantically suspenseful. Truly reminds me of those caged butterfly feelings when you’re bursting to tell someone they’re your favorite person and the soaring glee when you finally get it off your chest.” Harvey’s Dream Janet turns from the sink and, boom, all at once her husband of nearly thirty years is sitting at the kitchen table in a white T-shirt and a pair of Big Dog boxers, watching her. More and more often she has found this weekday commodore of Wall Street in just this place and dressed in just this fashion come Saturday morning: slumped at the shoulder and blank in the eye, a white scruff showing on his cheeks, man-tits sagging out the front of his T, hair standing up in back like Alfalfa of the Little Rascals grown old and stupid. Janet and her friend Hannah have frightened each other lately (like little girls telling ghost stories during a sleepover) by swapping Alzheimer’s tales: who can no longer recognize his wife, who can no longer remember the names of her children. No, she thinks, this is merely practicing to be old, and she hates it. But the answer is easy. Because you didn’t know.

20 Terrifying Two-Sentence Horror Stories. I Didn't Think It Was Possible Until #5... When The Hair On My Neck Stood Up March 5, 2014 Ever since I was a little kid I've loved sharing ghost stories around a campfire which is probably why I love watching horror movies. And every single time I finish watching one, well, a good one... I kick myself for not picking out a comedy instead. Someone on Reddit asked the question, "What is the best horror story you can come up with in two sentences?" "Lamb to the Slaughter" by Roald Dahl Questions and Answers "Lamb to the Slaughter" by Roald Dahl is a fun story that uses irony and perspective to create a truly enjoyable story. Still, to get the greatest value out of this story, it is worthwhile to understand not only what happens in the story but why it happens.