Eighteen years ago we designed and opened the school with the idea that we would have creation labs in the Media Center, GT room, and the TV studio. We started with video production, iMovie, Specular LogoMotion, Hyperstudio, and animation with Hollyood High kids. Here's an example of an EARLY (2003) video production called Bookfellas, featuring some Guy Ritchie-esque film direction techniques. NCHS 2015-2016. 3D Printers for Library Makerspaces. School Spotlight: Whitehorse Makers Club spurs creativity. What is a Maker or Innovation Space? Why the Maker Movement Matters to All Students. “Students engaged in direct experience with materials, unforeseen obstacles, and serendipitous discoveries may result in understanding never anticipated by the teacher.” ― Sylvia Libow Martinez, Invent To Learn: Making, Tinkering, and Engineering in the Classroom In 9th grade I cut my thumb on a saw in wood shop and had to get stitches. 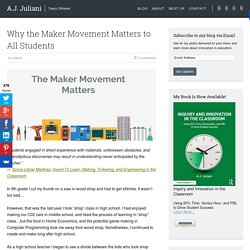 It wasn’t too bad… However, that was the last year I took “shop” class in high school. I had enjoyed making our C02 cars in middle school, and liked the process of learning in “shop” class…but the food in Home Economics, and the potential game-making in Computer Programming took me away from wood shop. GSB Executive Education - Innovation Programs. Overview Finance, strategy, and marketing. 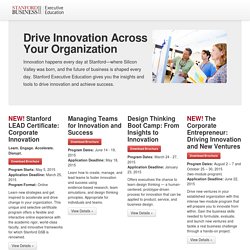 Design thinking, leadership, and culture. The Corporate Entrepreneur: Driving Innovation and New Ventures covers all that and more—moving from business model to business plan so you can successfully drive change and innovate from within. Design Thinking for Educators. Experiential Learning: Just Because It's Hands-On Doesn't Mean It's Minds-On. Experiential Learning: Just Because It’s Hands-On Doesn’t Mean It’s Minds-On by Grant Wiggins, Authentic Education I recently visited Thetford Academy in Vermont (one of the few and interesting public-private academies in New England) where they have a formal and explicit commitment to “experiential learning.” 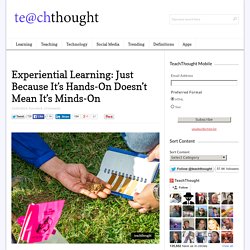 So, the leaders of the school asked me to visit classes that were doing experiential learning and to talk with staff at day’s end about it. I saw some great examples of such instruction. I visited the design tech course (see photos) and the class on the Connecticut River where students were learning about soil types prior to a wetlands field trip. I also spent the previous day at the Riverdale School where all 9th graders were learning the skills and habits of innovation and entrepreneurship as part of a cool new project headed by John Kao, former Harvard Business School innovation guru. Makerspace Workshop. Newsletter Archive. TIES Maker Workshop. “TechShop Inside! — Powered by Fujitsu” — TechShop & Fujitsu Team to Launch a Mobile Makerspace. It’s incredible how much the education system has changed within the last decade or so. 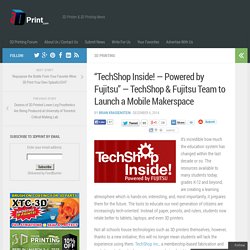 The resources available to many students today, grades K-12 and beyond, are creating a learning atmosphere which is hands-on, interesting, and, most importantly, it prepares them for the future. The tools to educate our next generation of citizens are increasingly tech-oriented. Instead of paper, pencils, and rulers, students now relate better to tablets, laptops, and even 3D printers. Not all schools house technologies such as 3D printers themselves; however, thanks to a new initiative, this will no longer mean students will lack the experience using them.

TechShop Inc., a membership-based fabrication and workshop studio, who happens to run a chain of eight makerspaces within the United States, has just announced a partnership with Fujitsu Limited and Fujitsu Laboratories of America. Mark Hatch, TechShop CEO, and Tango Matsumoto, Corporate Senior Vice President of Fujitsu Limited. 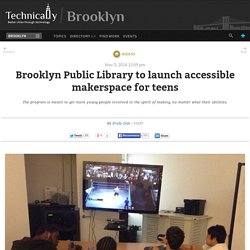 The Universal Makerspace launches this Saturday. When: Saturday, Nov. 8, 10 a.m. -noon.Where: Info Commons Lab, Brooklyn Public Library, Central Library, 10 Grand Army Plaza.What: The first session will be focused on making architectural models out of cardboard. The Universal Makerspace is a project of the library’s Child’s Place. John Huth, a young adult librarian, explained via email, “I first got the idea for this program while researching equipment for our accessible arcade which takes place every 4th Saturday of the month at Central. Downtown ‘makerspace’ aims to let Waco community innovate, unleash creativity - WacoTrib.com: Business. At the new tech workshop called Maker’s Edge, do-it-yourselfers will be able to make a dress, a dining room table or an engine part. 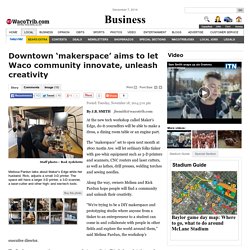 3D Printing to Raspberry Pi’s: How a Quiet Florida School Library Got Transformed by a Makerspace. On any given day at Holy Trinity Episcopal Academy, visitors to the Lower School library might be surprised to find it bears little resemblance to the school libraries of years past. 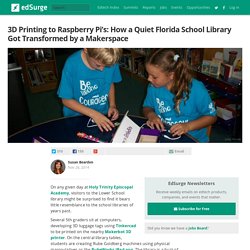 Several 5th graders sit at computers, developing 3D luggage tags using Tinkercad to be printed on the nearby Makerbot 3D printer. On the central library tables, students are creating Rube Goldberg machines using physical manipulatives or the RubeWorks iPad app. The library is a buzz of activity and student engagement, punctuated with squeals of excitement. And overseeing the makerspace is librarian Judy Houser, a veteran educator who took the visionary step of transforming this once quiet library into a space where students not only learn to love reading, but learn to explore, create and innovate using a variety of tools.

Relax and discuss. For Teachers. Digital Designer Mindstorms. You may build using a wide array of LEGO MINDSTORMS and LEGO Technic elements, or choose to filter your element choices to a specific LEGO set. 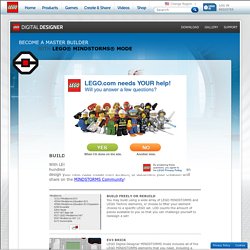 LDD counts the amount of pieces available to you so that you can challenge yourself to redesign a set! EV3 Brick. A Roundup of How Today’s 3D Printing Technology is Progressing. We are due for another technology revolution. 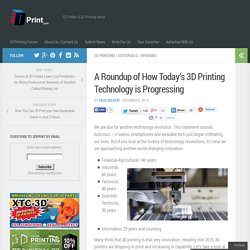 This statement sounds ludicrous — it seems smartphones and wearable tech just began infiltrating our lives. But if you look at the history of technology revolutions, it’s clear we are approaching another world-changing innovation: Financial-Agricultural, 140 years Industrial, 60 yearsTechnical, 40 yearsScientific-Technical, 30 yearsInformation, 25 years and counting Many think that 3D printing is that very innovation.

Organs You may have heard of 3D printed organs already and 3D printed spinal disc replacements, but now California-based biotech firm Organovo is set to begin selling 3D printed liver tissue by the end of the year, according to CNN. Dissecting the Un-Makerspace: Recycled Learning. It starts with a twist, a squeak, and a cheer. Watch out, 1980s cassette player, broken computer mouse, old monitor -- my fifth graders and I are looking for you! Your future doesn't hold a dumpster in it, at least not yet. You, my memory of past innovation, get a second life. Makerspace TIES14. Want to Start a Makerspace at School? Tips to Get Started.

As the Maker Movement starts to gain momentum, schools that are trying to find ways to foster the do-it-yourself environment can learn a few lessons from another nexus in the universe: public libraries. What Makes an ‘Extreme Learner’? By Jane Mount/MindShift By Linda Flanagan When Mollie Cueva-Dabkoski was dissecting a sheep’s heart during an eighth-grade science class, she had an epiphany that changed her life. “That heart told the story of anatomy and physiology!” This Arduino Alert System Sends You A Text When The Laundry Is Done. Building a culture of creativity and discovery in education.

Caine's Arcade. Westport Library. Diary of an Evolving MakerSpace: The Westport Library. TIES 2014 MakerSpace Experience. MakerSpace: The Online Community for Makers. #TIES14 (with images, tweets) · nchslmc. Why the Future Will be Made by Creators, Not Consumers. Donnieray/Flickr Megan Smith, Chief Technology Officer of the United States and former Google executive, wants every child to be able to code. That’s a sweeping but practical vision. If we’re teaching students the languages of letters and numbers to be able to speak, understand, and impact this world — math, science, technology, and code must be part of that knowledge.

If we want students to be able to understand the technology that they use every day, then we need to start providing those building blocks from an early age. The ability to code enables young people to become creators rather than consumers. No Coders Left Behind Countries are starting to realize that mandating coding in the classroom could be the key. Bringing STEM into the classroom isn’t just a matter of providing computers and tablets to students or giving teachers a one-day workshop.

Teaching the Teachers. Light It Up! 15 Awesome LED Projects. Speaking of bright lights and big balloon-filled celebrations, what about getting into some DIY action with LED lights? LEDs are awesome and make it easy to turn household items like bottles, jars, and cotton balls into gorgeously illuminated pieces of decor. 1. Illuminated Bouquet: For this bit of floral illumination, you use a doily dimensional flower punch and an LED branch!

(Tutorial and photos: Saved By Love Creations) 2. Educator Innovator. Following Hack Your Notebook Day, a nationwide paper circuitry and applied STEM learning event held this summer that brought together makers from around the country, libraries and other connected learning spaces have continued “hacking” notebooks by holding independent events for diverse groups of learners around the country. In August, a group of teens gathered at the San Francisco Public Library, a member of the YouMedia network, to do some electrical engineering. But they probably didn’t realize that’s what they were doing. DIY projects, how-tos, and inspiration from geeks, makers, and hackers. Sylvia's Super-Awesome Maker Show!

I know they really enjoyed this time together making. On Tuesday afternoon I presented to a wonderful group of teacher librarians, classroom teachers, administrators and others. My presentation Bringing A New Voice To Libraries and Schools Through Makerspaces is one that I have been sharing around the country for the last few months.

Tech Trends 2015. Sylvia's DIY webshow on everything cool and worth Making. Piano stairs - TheFunTheory.com - Rolighetsteorin.se. Maker Space and Learning Commons. Meet Debbie Sterling - GoldieBlox founder. At GoldieBlox, our goal is to get girls building. We’re here to help level the playing field in every sense of the phrase.

By tapping into girls' strong verbal skills, our story + construction set bolsters confidence in spatial skills while giving young inventors the tools they need to build and create amazing things. Inspiring the next generation of female engineers: Debbie Sterling at TEDxPSU. (Rethinking) Makerspaces. Amosblanton. Best Websites for Teaching & Learning Nomination Form. Meet Google Drive – One place for all your files. Nikki Robertson’s albums. 3D Printers for Library Makerspaces. Google Slides - create and edit presentations online, for free. Getting REaL In The Library. The True Adventures of a High School Librarian.