Plastic Pollution in the Ocean 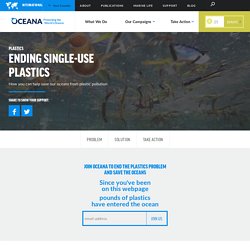 An estimated 17.6 billion pounds of plastic leaks into the marine environment from land-based sources every year—this is roughly equivalent to dumping a garbage truck full of plastic into the oceans every minute. As plastics continue to flood into our oceans, the list of marine species affected by plastic debris expands. Tens of thousands of individual marine organisms have been observed suffering from entanglement or ingestion of plastics permeating the marine environment—from zooplankton and fish, to sea turtles, marine mammals and seabirds. Plastics never go away. Instead, they break down into smaller and smaller pieces, which act as magnets for harmful pollutants. National Geographic Society.

The Great Pacific Garbage Patch is a collection of marine debris in the North Pacific Ocean.

Marine debris is litter that ends up in oceans, seas, and other large bodies of water. The Great Pacific Garbage Patch, also known as the Pacific trash vortex, spans waters from the West Coast of North America to Japan. The patch is actually comprised of the Western Garbage Patch, located near Japan, and the Eastern Garbage Patch, located between the U.S. states of Hawaii and California. These areas of spinning debris are linked together by the North Pacific Subtropical Convergence Zone, located a few hundred kilometers north of Hawaii. This convergence zone is where warm water from the South Pacific meets up with cooler water from the Arctic. A Guide to Plastic in the Ocean.

Plastic is everywhere: In your home, your office, your school — and your ocean. 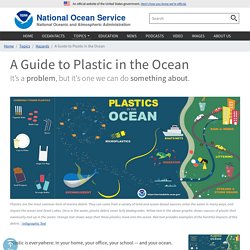 Among the top 10 kinds of trash picked up during the 2017 International Coastal Cleanup were food wrappers, beverage bottles, grocery bags, straws, and take out containers, all made of plastic. How did it all get there? Why is it a problem? What can we do? Sea of Plastic. Pbslearningmedia. Plastic in the Pacific. What plastic item would you love to ban? 15 TED speakers tell us. Stop Plastic Pollution. A massive volume of plastic garbage now litters every ocean on the planet, posing a growing threat to marine life. 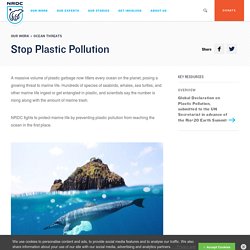 Hundreds of species of seabirds, whales, sea turtles, and other marine life ingest or get entangled in plastic, and scientists say the number is rising along with the amount of marine trash. NRDC fights to protect marine life by preventing plastic pollution from reaching the ocean in the first place. One of the most effective solutions is to call on producers of single-use plastics to take greater responsibility for their products. Many states mandate that manufacturers of paint and carpet recover and recycle their products after use. Similarly, makers of plastic packaging should be required to find innovative ways to design better materials that can be more fully recovered for recycling or reuse. Gale In Context: Science. Gale In Context: Science is an engaging resource that provides contextual information on hundreds of today's most significant science topics. 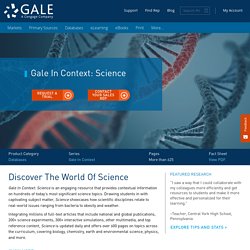 Drawing students in with captivating subject matter, Science showcases how scientific disciplines relate to real-world issues ranging from bacteria to obesity and weather. Integrating millions of full-text articles that include national and global publications, 200+ science experiments, 300+ interactive simulations, other multimedia, and top reference content, Science is updated daily and offers over 600 pages on topics across the curriculum, covering biology, chemistry, earth and environmental science, physics, and more. A part of the Gale In Context suite, Science offers an enhanced user experience with familiar navigation and a modern design to help users successfully orient across Gale products. This means less time learning how to use the product, and more time developing critical thinking skills. New Plastic Could Reduce Ocean Pollution. Discarded plastic waste that ends up in the ocean—where it is harmful to marine life and the health of the oceanic eco-system, in general—is a massive environmental problem that scientists have been trying to solve in various ways. 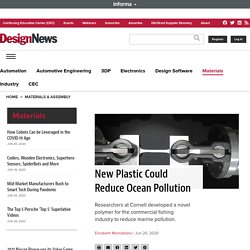 About half of this type of plastic pollution comes from commercial fishing gear in the form of the nets and ropes. To help address this problem, scientists at Cornell University have developed a new durable polymer for marine use that can degrade through exposure to ultraviolet radiation. He led the world's largest beach cleanup. Now, he's on a mission to save the ocean from plastic. His mission? 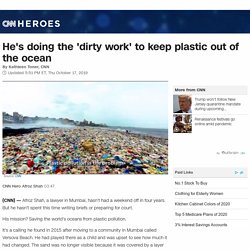 Saving the world's oceans from plastic pollution. It's a calling he found in 2015 after moving to a community in Mumbai called Versova Beach. He had played there as a child and was upset to see how much it had changed. The sand was no longer visible because it was covered by a layer of garbage more than five feet thick -- most of it plastic waste. "The whole beach was like a carpet of plastic," he said. The unsightly mess Shah had stumbled upon is part of a global environmental crisis. The results are devastating.

"The marine species have no choice at all," Shah said. In October 2015, Shah began picking up trash from the beach every Sunday morning. Shah hasn't stopped since. All told, the movement has cleared more than 60 million pounds of garbage -- mostly plastic waste -- from Mumbai's beaches and waterways. For Shah, the work has always been a personal journey, but it has earned global attention. "This problem of pollution is created by us. ... "This world talks too much.