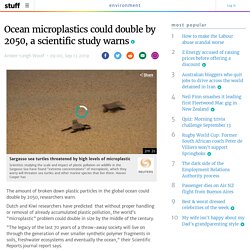 Dutch and Kiwi researchers have predicted that without proper handling or removal of already accumulated plastic pollution, the world's "microplastic" problem could double in size by the middle of the century. "The legacy of the last 70 years of a throw-away society will live on through the generation of ever smaller synthetic polymer fragments in soils, freshwater ecosystems and eventually the ocean," their Scientific Reports journal report says. 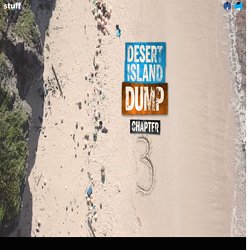 About 8.3b metric tons has been created to date. According to Britain’s Royal Statistical Society, a staggering 91 per cent of that isn’t recycled. An estimated eight million tonnes ends up in our oceans each year. Plastics in the Environment: Te Ao Hurihuri – The Changing World. 2019: Evidence summary on plastics in the environment. 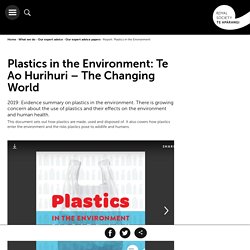 There is growing concern about the use of plastics and their effects on the environment and human health. This document sets out how plastics are made, used and disposed of. It also covers how plastics enter the environment and the risks plastics pose to wildlife and humans. Download Plastics in the Environment [PDF 7.82 MB] Ocean Pollution. Marine Litter Distribution and Density in European Seas, from the Shelves to Deep Basins. Abstract Anthropogenic litter is present in all marine habitats, from beaches to the most remote points in the oceans. 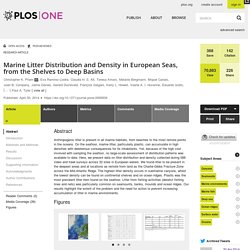 On the seafloor, marine litter, particularly plastic, can accumulate in high densities with deleterious consequences for its inhabitants. Yet, because of the high cost involved with sampling the seafloor, no large-scale assessment of distribution patterns was available to date. Here, we present data on litter distribution and density collected during 588 video and trawl surveys across 32 sites in European waters. We found litter to be present in the deepest areas and at locations as remote from land as the Charlie-Gibbs Fracture Zone across the Mid-Atlantic Ridge. 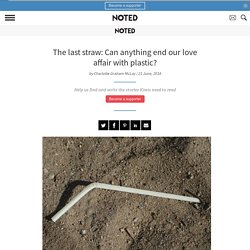 Most of us would have read, for example, that the best thing we could do for the environment is to stop consuming meat and dairy, but how many of us actually consider it? That doesn’t mean that change isn’t worth making. But if we all stopped using straws or bags altogether, scientists aren’t sure what difference would we notice in our natural environment. That billion elephants’ worth of plastic waste Kara Lavender Law, the oceanographer, calculated we had produced so far?

It’s a wrap on plastic bags. White heron left with 'choking collar' of plastic. Kiwis yet to wake up to the true cost of fast fashion - North & South. Viscose is often promoted as a sustainable alternative to cotton or polyester, but a report produced by the Changing Markets Foundation last year, which involved investigations of 10 manufacturing sites in China, India and Indonesia, uncovered water pollution from untreated contaminated waste, air pollution and, in some cases, severe health impacts on surrounding communities. 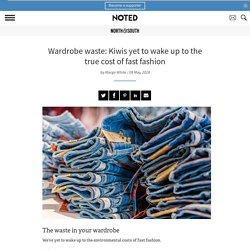 Brands alleged to source from these factories included H&M and Inditex, which owns Zara. While the brands were transparent about where they sourced viscose textiles, the factories weren’t particularly transparent about their practices. You could spend a lot time looking for sustainable fashion, but it’s complicated, confusing and time-consuming, and you still can’t be sure if it is what it says it is. “I would think carefully about a company marketing itself as selling sustainable clothing,” agrees McNeill.

Not that she is advocating for such legislation, at least not yet. Fair enough. For the Better Good: The Kiwi company making water bottles from plants - Noted. RelatedArticlesModule - plastic Meet the Kiwi tackling the world's plastic problem head-on. 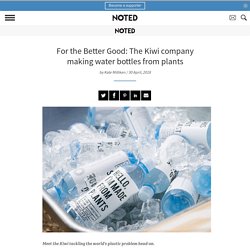 Jayden Klinac's light-bulb moment happened on a road trip between Auckland and Wellington when he forgot his refillable water bottle. His frustrating realisation was that customers don't have the option to buy bottles not made of oil and that don't have the ability to disappear after their useful life. “They don’t have refilling stations at petrol stations, and I’m not exactly going to stick my head under the sink,” says Klinac. Reading, empathy, and environmental literacy for Earth Day. Dead sperm whale found with 30kg of plastic in its stomach. A young male sperm whale that was found dead off the coast of Spain had 30kg of garbage in its digestive system. 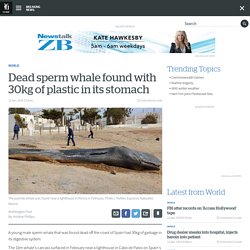 The 10m whale's carcass surfaced in February near a lighthouse in Cabo de Palos on Spain's southeastern coast. A necropsy revealed that the animal had rubbish bags, polypropylene sacks, ropes, net segments and a drum, among other things, in its stomach and intestines. Local authorities said the animal died because of inflammation of the abdominal lining, or peritonitis. The amount of human waste in its system had become so enormous that the whale was unable to expel the rubbish from its digestive system.

A picture shared by a local environmental group showed what appears to be a severely underweight sperm whale. Authorities said the animal weighed about 7 tonnes. Bigger waves needed to turn the tide on plastics. 'The most disgusting thing I’ve seen in the water' 20 Facts About Ocean Pollution. The ocean remains one of the most expansive, mysterious and diverse places on Earth. 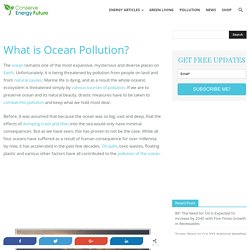 Unfortunately, it is being threatened by pollution from people on land and from natural causes. Marine life is dying, and as a result the whole oceanic ecosystem is threatened simply by various sources of pollution. If we are to preserve ocean and its natural beauty, drastic measures have to be taken to combat this pollution and keep what we hold most dear. Before, it was assumed that because the ocean was so big, vast and deep, that the effects of dumping trash and litter into the sea would only have minimal consequences. 22 Facts About Plastic Pollution (And 10 Things We Can Do About It) - EcoWatch. By Nicole D'Alessandro It seems nearly impossible to escape plastic in our every day lives, doesn't it? 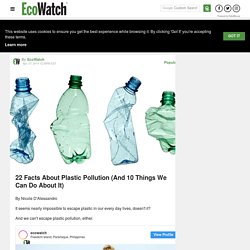 And we can't escape plastic pollution, either. Plastic is literally at my fingertips all day long. Plastic Oceans Educational Supplement vJan2108. Most Ocean Plastic Pollution Carried by 10 Rivers. The equivalent of one garbage truck full of plastic waste is dumped into the world’s oceans every minute, equal to 8 million tons a year. New research suggests that 90 percent of that waste gets into the oceans through 10 major river systems. “It seems that larger rivers preferentially transport plastic and these are rivers with a large population. Plastic Pollution. Mangroves free of 500 tonne of plastic. Photograph: © SAF — Coastal Care Excerpts; Nearly 500 tonne of plastic waste was removed from eight mangrove sites across Mumbai and suburban areas over the last two months.

On an average, 70-80 tonne of plastic is removed every week, and 10-15 tonne every day. Awareness about mangroves is now gripping Maharashtra. The participation by citizens too has risen from 720 to 14,400 within a couple of months time… Read Full Article; Asian Age (02-04-2018) Monitoring Mumbai’s Mangroves; NASA / Earth Observatory (11-30-2017)In this booming city, India’s largest, mangrove forests have historically been overlooked. Satellite photos reveal how Mumbai killed its mangrove forests to risk epic floods; Quartz (08-30-2017)Mumbai is essentially a peninsula jutting into the Arabian Sea. Mangroves protect coastlines, store carbon – and are expanding with climate change; The Conversation (02-09-2018) Plastic Oceans.