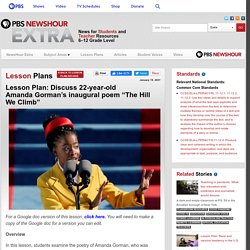 You will need to make a copy of the Google doc for a version you can edit. Overview. About Us. EcoWatch - How one man started the world's biggest beach cleanup. He led the world's largest beach cleanup. Now, he's on a mission to save the ocean from plastic. Afroz Shah - Recherche Google. Marley Dias: The 13-Year-Old Activist & Author. Activist and soon-to-be author Marley Dias is only 13 years old. 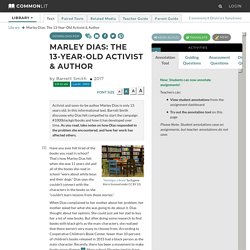 In this informational text, Barrett Smith discusses why Dias felt compelled to start the campaign #1000blackgirlbooks and how it has developed over time. As you read, take notes on how Dias responded to the problem she encountered, and how her work has affected others. Top 10 Famous Teenage Activists Who Will Inspire You. After recently discovering a few young, teenage activists, I thought I'd compile a list of ten young, diverse, activists who are working hard to better their communities and the world around them. 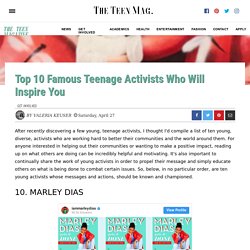 For anyone interested in helping out their communities or wanting to make a positive impact, reading up on what others are doing can be incredibly helpful and motivating. It's also important to continually share the work of young activists in order to propel their message and simply educate others on what is being done to combat certain issues. So, below, in no particular order, are ten young activists whose messages and actions, should be known and championed. Lists the 25 Most Influential Teens of 2018. 20 Young Activists Who Are Changing the World. Something different happened after the mass shooting at Marjory Stoneman Douglas High School in Parkland, Florida on February 14. Instead of the usual cynical narrative of thoughts and prayers and a total lack of political action, the students spoke out. Mohamad - KidsRights. I'm Mohamad. 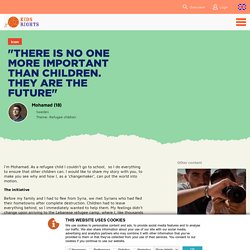 As a refugee child I couldn’t go to school, so I do everything to ensure that other children can. I would like to share my story with you, to make you see why and how I, as a ‘changemaker’, can put the world into motion. The initiative. KidsRights Changemakers. The "Road To Change" Tour: How Parkland students went from teens to activists. March For Our Lives - KidsRights. The safest place in Florida David Hogg, Emma Gonzalez, Jaclyn Corin and Matt Deitsch grew up in a country where school shooting drills are a regular part of life. 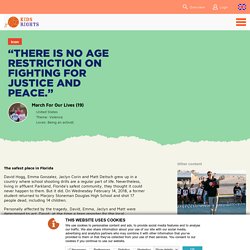 March For Our Lives Timeline Of Events: Parkland School Shooting Survivors On Making History. 10 Questions for the Present: Parkland Student Activism. In this lesson, students will analyze how a 2018 high-school mass shooting in Parkland, Florida, spurred a group of student survivors to become passionate activists against gun violence. 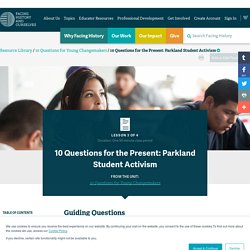 They will examine the tools used by their peers on the front lines of a burgeoning social movement—including their engagement with social media and journalism, their electoral strategies, and their internal organization. A Young Activist’s Advice: Vote, Shave Your Head and Cry Whenever You Need To. But we couldn’t go back. 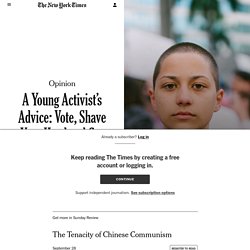 All of us know what it feels like to be Harry Potter now. Even when people come up to us quietly to say thank you, you never know if they’re just trying to shoot you at close range. Going up against the country’s largest gun lobby organization was obviously something that needed to be done, but it means that the people we’re arguing against are the ones with the guns. Five teens who changed the world - BBC Three. Nelson Mandela - Biographical. 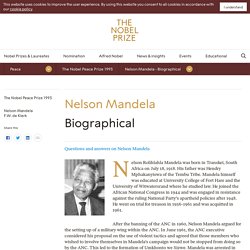 His father was Hendry Mphakanyiswa of the Tembu Tribe. Mandela himself was educated at University College of Fort Hare and the University of Witwatersrand where he studied law. Earth. The Life of Malala Yousafzai. Malala Yousafzai: The Bravest Girl in the World. In this exclusive excerpt from her autobiography, I Am Malala, young activist Malala Yousafzai recounts the day she was shot by the Taliban. 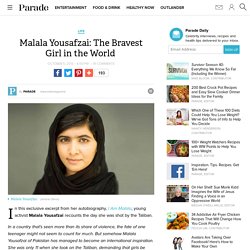 In a country that’s seen more than its share of violence, the fate of one teenager might not seem to count for much. But somehow Malala Yousafzai of Pakistan has managed to become an international inspiration. She was only 11 when she took on the Taliban, demanding that girls be given full access to school. Malala Yousafzai - The right to learning should be given to any child. He Named Me Malala. Malala: There is a moment when you have to choose whether to be silent or to stand up. 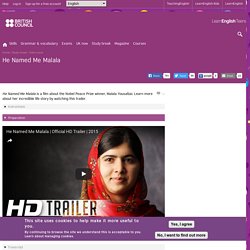 The big picture: Liberal justices questioned whether the administration clearly explained why it ended DACA — beyond claiming it to be illegal — and the impact of ending it. Conservative justices seemed skeptical about whether the courts have the authority to review the decision at all.