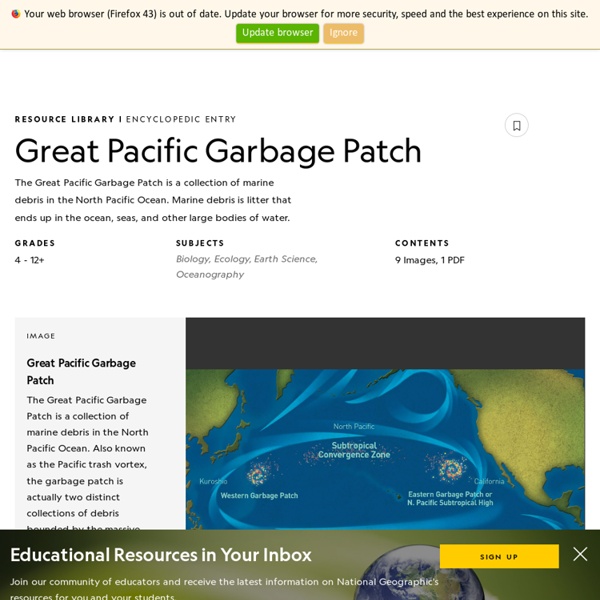 Bigger waves needed to turn the tide on plastics Emily Joy Frost Emily Joy Frost is a doctoral candidate in the University of Auckland’s School of Biological Sciences. Show more Futurelearning There is such a wide scope for reducing our plastic footprint, so where is it? If This Plastic Bag Ends Up In The Ocean, Don't Worry Meeting with automakers in January, Donald Trump vowed to make Detroit's life easier. He said regulations on the auto industry are "out of control" and that his administration would create an "extremely hospitable" environment for making and selling cars in this country. Many observers took this to mean that Trump will soon roll back energy efficiency standards put in place by his predecessor. For light-duty vehicles, these are due to reach 39.5 miles per gallon (mpg) by 2017 and climb to 54.3 mpg by 2025. If so, the effect on consumers and greenhouse emissions could be dramatic. Assuming people drive relatively the same amount, cars will use more fuel, meaning more spending at the pump, and more pollution into the atmosphere.

Water Pollution What is water pollution? Water pollution happens when toxic substances enter water bodies such as lakes, rivers, oceans and so on, getting dissolved in them, lying suspended in the water or depositing on the bed. This degrades the quality of water. Not only does this spell disaster for aquatic ecosystems, the pollutants also seep through and reach the groundwater, which might end up in our households as contaminated water we use in our daily activities, including drinking. Sources and effects of water pollution Water pollution can be caused in a number of ways, one of the most polluting being city sewage and industrial waste discharge.

How to make paper straws Did you know that plastic straws are one of the top items found during beach cleanups? And that they can be extremely harmful to our planet’s magnificent marine life? It’s time to take action! Great Pacific Garbage Patch Is Bigger and Mostly Made of Fishing Gear The Great Pacific Garbage Patch is the world’s largest collection of floating trash—and the most famous. It lies between Hawaii and California and is often described as “larger than Texas,” even though it contains not a square foot of surface on which to stand. It cannot be seen from space, as is often claimed. The lack of terra firma did not deter a pair of advertising executives from declaring the patch to be an actual place. They named it the nation of Trash Isles, signed up former Vice President Al Gore as its first “citizen” and last fall, petitioned the United Nations for recognition. The publicity stunt perpetuated the myth.

If you eat seafood, you are eating thousands of pieces of plastic Seafood fans are ingesting up to 11,000 tiny pieces of plastic a year with unknown health effects, a new study reveals. Ocean pollution is getting ingested by marine life in the form of tiny, toxic microplastics, according to researchers at the University of Ghent in Belgium. And if you eat a lot of seafood, these microplastics will eventually end up in your stomach. Scientists currently have no clue what type of implications this will have on a person’s health or for future generations. “Now we’ve established that they do enter our body and can stay there for quite a while, we do need to know the fate of the plastics,” Dr.

The 5 Most Polluted Seas in the World NOTE FROM SWEET GREENS: This article wasn’t written by me. GD Environmental is a specialist waste collection and disposal company based in South Wales. Its aim is to improve local waste management by recycling more than 96% of all waste it collects, so if you’d like to see how many of your items are recycled, pay one of its centers a visit and see the magic at work! Thank you for supporting the companies that keep Sweet Greens in business. We all know that recycling is important and as safe waste management processes have grown in use over the past few years, many of our streets and much of our countryside now look cleaner than ever. But what about the areas of the world we don’t see on a regular basis, like underground at landfill sites or far out to sea?

The Great Pacific Garbage Patch Understanding Toxicity It is commonly known that harmful PBT (Persistent Bio-accumulative Toxic) chemicals are found in ocean plastics, so researchers at The Ocean Cleanup tested plastic samples from the expeditions for their chemical levels. Their results helped them to realize what chemicals are present in the patch and what that means for animals feeding there. Plastics ranging from various type and size were analyzed by placing them in mixtures that would allow the various chemicals to be identified. A process known as Chromatography.

Young Marine Scientist - BTN Here at BTN, we seem to be pretending to be scientists an awful lot, but we've got nothing on Rehan here. At just ten, he's one of the youngest people in Australia to become an author of a scientific paper. So how do you go from wannabes, to legit? Well, it all started with his love for exploring the ocean. REHAN: The ocean is like a whole different world itself. Plastic trash rides ocean currents to the Arctic View the video. Remember the last plastic straw you used? It may have simply ended up in a landfill. But there’s also a good chance that straw just began a very long journey. Maybe it tumbled out of a garbage truck, for example. The wind might have blown it to a site where rainwater washed it into some stream.

Plastic Garbage Patch Bigger Than Mexico Found in Pacific Water, water, everywhere—and most of it is filled with plastic. A new discovery of a massive amount of plastic floating in the South Pacific is yet another piece of bad news in the fight against ocean plastic pollution. This patch was recently discovered by Captain Charles Moore, founder of the Algalita Research Foundation, a non-profit group dedicated to solving the issue of marine plastic pollution. Moore, who was the first one to discover the famed North Pacific garbage patch in 1997, estimates this zone of plastic pollution could be upwards of a million square miles in size.

5 Most Polluted Lakes in the World biodiversity and the environment in the world. It can come in a number of forms, ranging from simple fertilizer and agricultural runoff, to plastic and other trash pollution, through to radioactive and other toxic waste. Unfortunately, the worst affected areas are usually waterbodies such as lakes or rivers. Since local communities often rely on these for water, food, and/or recreation, the pollution can then have flow on effects. The toxic waste that enters Indonesia’s Citarum River, one of the world's most polluted MAJALAYA, Indonesia: It’s been called the world’s most polluted river by the World Bank. Murky, dense and dirty-brown – the water that runs through Citarum River in Indonesia’s West Java is toxic. Yet, the river supports around 28 million people who rely on it for daily activities such as cooking, bathing and laundry.