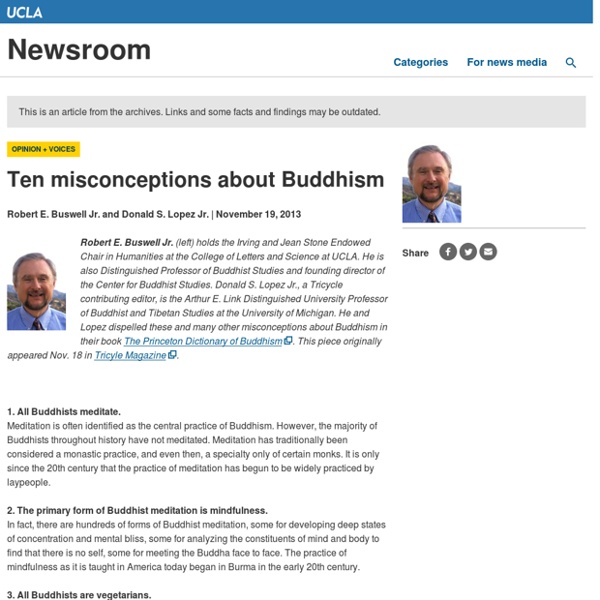 Robert E. Buswell Jr. and Donald S. Lopez Jr. | November 19, 2013 Robert E. Buswell Jr. (left) holds the Irving and Jean Stone Endowed Chair in Humanities at the College of Letters and Science at UCLA. 1. Meditation is often identified as the central practice of Buddhism. 2. In fact, there are hundreds of forms of Buddhist meditation, some for developing deep states of concentration and mental bliss, some for analyzing the constituents of mind and body to find that there is no self, some for meeting the Buddha face to face. 3. Bhikṣu, the Sanskrit term translated as "monk," literally means "beggar." 4. It is often said that a war has never been fought in the name of Buddhism. 5. Buddhism has many philosophical schools, with a sophistication equal to that of any philosophical school that developed in Europe. 6. 7. Zen masters burn statues of the Buddha, scorn the sutras, and regularly frequent bars and brothels. 8. The famous phrase "Four Noble Truths" is a mistranslation. 9. 10.

The 10 Figures in Buddhist Art You Need to Know – Artisera Since ancient times, subjects from Buddhism have been widely and beautifully represented in art through paintings and sculptures. Various Bodhisattvas (those who aspire to become like Buddha or attain enlightenment), are frequently depicted in Buddhist art, amongst other important characters. The portrayal of Buddhist figures in art is deeply nuanced and layered, with different postures and colours signifying specific meaning. Here are 10 figures depicted most commonly in Buddhist art. 1. Guan Yin Buddhism in the World Today — Study Buddhism India Buddhism started to lose influence in India in the 7th century, and all but disappeared after the fall of the Pala Empire in the 12th century, apart from in the far northern Himalayan regions. The end of the 19th century saw the revival of Buddhism in India, when Sri Lankan Buddhist leader Anagarika Dharmapala founded the Maha Bodhi Society with the help of British scholars. Their main purpose was to restore the Buddhist pilgrimage sites in India, and they were very successful in building temples at all Buddhist sites, all of which have monks.

What is Nirvana in Buddhism? The Pali word nibbana (nirvana in Sanskrit) was first used by the Buddha to describe the highest state of profound well-being a human is capable of attaining. The mind awakens from delusion, is liberated from bondage, is cleansed of all its defilements, becomes entirely at peace, experiences the complete cessation of suffering, and is no longer reborn. Related: What’s in a Word? Emptiness More specifically, the fires of greed, hatred, and delusion—toxic unconscious mental and emotional dispositions that cause people to harm themselves and one another and cause suffering— have been extinguished (nibbuta) in a person who attains nirvana.

Pursuing an American Buddhism Charles Prebish has probably visited more American dharma centers than anyone else on the continent. For those familiar with his work, this should be no surprise, as Prebish pioneered the scholarly study of American Buddhism as a subdiscipline of Buddhist studies. In the late sixties and early seventies, when Prebish was beginning his career, the academic study of Buddhism meant largely its study as an artifact of “Oriental” culture. As a young scholar Prebish focused on early Indian Buddhism: the development of the monastic system and the disciplinary literature known as Vinaya, topics well within the range of traditional Buddhist studies scholarship.

5 facts about Buddhists around the world Buddhists across Asia are preparing to celebrate the birthday of Prince Siddhartha Gautama, who later became known as Gautama Buddha and was the founder of Buddhism. The Buddha is believed to have been born roughly 2,500 years ago in what is today Nepal. In Asia, where most Buddhists live, different countries celebrate the occasion on different days, including April 8 in Japan, May 12 in South Korea and May 18 in India and Nepal. The holiday goes by several names, including Buddha Purnima, Vesak, Buddha Jayanti and Ikh Duichen, and is often marked by national holidays, festivals and events at Buddhist temples. Here are five facts about Buddhists:

Buddhism Information As of 2010, there were about 488 million Buddhists around the world, representing 7% of the world's total population. The number of Buddhists around the world is expected to increase between 2010 and 2030, rising to about 511 million. However, the global Buddhist population is projected to decline after 2030, falling to 486 million by 2050, roughly where it was in 2010. Buddhists are expected to remain very heavily concentrated in the Asia-Pacific region, where 99% of Buddhists lived in 2010 and a similarly high proportion (98%) are projected to reside in 2050. World Religions Buddhism Today In the 21st century CE, it is estimated that 488 million (9-10% of the world population) people practice Buddhism. Approximately half are practitioners of Mahayana schools in China and it continues to flourish. The main countries that practice Buddhism currently are China, Japan, Korea, and Vietnam.

Britannica Nirvana, (Sanskrit: “becoming extinguished” or “blowing out”) Pali nibbana, in Indian religious thought, the supreme goal of certain meditation disciplines. Although it occurs in the literatures of a number of ancient Indian traditions, the Sanskrit term nirvana is most commonly associated with Buddhism, in which it is the oldest and most common designation for the goal of the Buddhist path. It is used to refer to the extinction of desire, hatred, and ignorance and, ultimately, of suffering and rebirth.

"How Buddhism Came to the West" by Maia Duerr Shakyamuni Buddha lived in India more than 2,500 years ago. Yet the influence of his life and his teachings continues today in multitudes of ways. There are an estimated 1.2 billion Buddhists worldwide, and perhaps 6 million in the U.S. alone. Over the past two decades, interest in Buddhism and meditation has grown tremendously in the United States—in 2003, Time magazine estimated that 10 million people meditate regularly. This increased interest in Buddhism in the West is happening at a time when many people are experiencing the strain of living with the fear and anxiety generated by an unstable economy, terrorist threats, social unrest, and environmental peril. The simple practice of becoming aware of one’s breath and thoughts, as taught by the Buddha, has yielded benefits in health care, psychology, education, and many other fields.

Basics of Buddhism The Four Noble Truths The Four Noble Truths comprise the essence of Buddha's teachings, though they leave much left unexplained. They are the truth of suffering, the truth of the cause of suffering, the truth of the end of suffering, and the truth of the path that leads to the end of suffering. More simply put, suffering exists; it has a cause; it has an end; and it has a cause to bring about its end. The notion of suffering is not intended to convey a negative world view, but rather, a pragmatic perspective that deals with the world as it is, and attempts to rectify it. The concept of pleasure is not denied, but acknowledged as fleeting. The Buddhist Society: Scriptures & Texts Oral Tradition The Buddha's teaching was oral. He taught for 45 years, adapting the teaching to suit the group he was addressing, and there is duplication in the texts. The language he used is understood to be Magadhi. The Sangha memorized the teachings, and there were group recitations at festivals and special occasions.

The Origins of Buddhism Buddhism, founded in the late 6th century B.C.E. by Siddhartha Gautama (the "Buddha"), is an important religion in most of the countries of Asia. Buddhism has assumed many different forms, but in each case there has been an attempt to draw from the life experiences of the Buddha, his teachings, and the "spirit" or "essence" of histeachings (called dhamma or dharma) as models for the religious life. However, not until the writing of the Buddha Charita (life of the Buddha) by Ashvaghosa in the 1st or 2nd century C.E. do we have acomprehensive account of his life. The Buddha was born (ca. 563 B.C.E.) in a place called Lumbini near the Himalayan foothills, and he began teaching around Benares (at Sarnath).

The Buddhist Perspective on Human Fulfillment: The Pure Land by Alfred Bloom, Emeritus Professor, University of Hawaii Every major religion of salvation has a vision of paradise, the destination of the faithful. In the early tradition of Buddhism the goal was inconceivable Nirvana. Nirvana as a term meant to blow out, that is, blowing out or extinction of the winds of passions, delusion and greed; transcendence of karma.