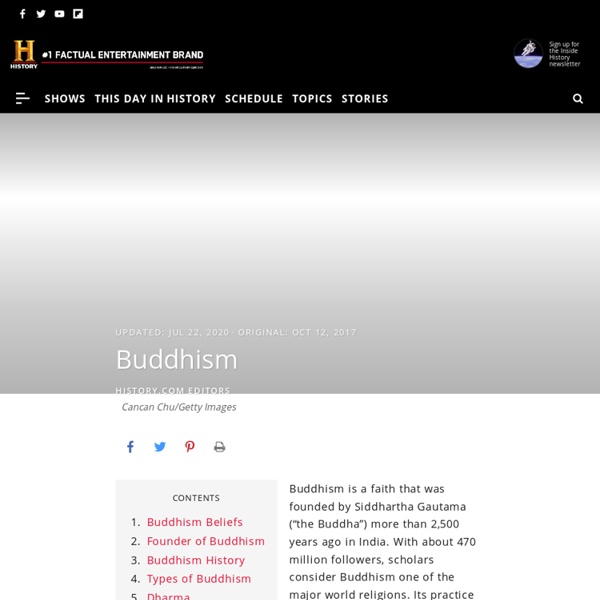 Buddhism is a faith that was founded by Siddhartha Gautama (“the Buddha”) more than 2,500 years ago in India. With about 470 million followers, scholars consider Buddhism one of the major world religions. Its practice has historically been most prominent in East and Southeast Asia, but its influence is growing in the West. Many Buddhist ideas and philosophies overlap with those of other faiths. Buddhism Beliefs Some key Buddhism beliefs include: Followers of Buddhism don’t acknowledge a supreme god or deity. Founder of Buddhism Siddhartha Gautama, the founder of Buddhism who later became known as “the Buddha,” lived during the 5th century B.C. Gautama was born into a wealthy family as a prince in present-day Nepal. He decided to give up his lavish lifestyle and endure poverty. After six years of searching, Buddhists believe Gautama found enlightenment while meditating under a Bodhi tree. Buddhism History Over the next few centuries, Buddhism began to spread beyond India. Types of Buddhism

Buddhism World religion founded by the Buddha Buddhism (, ) is the world's fourth-largest religion[3] with over 520 million followers, or over 7% of the global population, known as Buddhists.[6] Buddhism encompasses a variety of traditions, beliefs and spiritual practices largely based on original teachings attributed to the Buddha (born Siddhārtha Gautama in the 5th or 4th century BCE) and resulting interpreted philosophies. It originated in ancient India as a Sramana tradition sometime between the 6th and 4th centuries BCE, spreading through much of Asia. Two major extant branches of Buddhism are generally recognized by scholars: Theravāda (Pali: "The School of the Elders") and Mahāyāna (Sanskrit: "The Great Vehicle").

Ten misconceptions about Buddhism Robert E. Buswell Jr. and Donald S. Lopez Jr. | November 19, 2013 Robert E. Judaism: Founder, Beliefs & Facts Judaism is the world’s oldest monotheistic religion, dating back nearly 4,000 years. Followers of Judaism believe in one God who revealed himself through ancient prophets. The history of Judaism is essential to understanding the Jewish faith, which has a rich heritage of law, culture and tradition. Judaism Beliefs Jewish people believe there’s only one God who has established a covenant—or special agreement—with them. Their God communicates to believers through prophets and rewards good deeds while also punishing evil.

Islam - Five Pillars, Nation of Islam & Definition Islam is the second largest religion in the world after Christianity, with about 1.8 billion Muslims worldwide. Although its roots go back further, scholars typically date the creation of Islam to the 7th century, making it the youngest of the major world religions. Islam started in Mecca, in modern-day Saudi Arabia, during the time of the prophet Muhammad’s life. Today, the faith is spreading rapidly throughout the world. Islam Facts

Being a Better Human Recently, someone asked me how they could become a good Buddhist and this got me thinking. I believe our goal shouldn’t be how to become the best Buddhist, but the best whomever we already are. We were born humans and at our very core we are all the same, so it seems more encompassing, and less discriminatory, to be the best possible human we can. One way to achieve this goal is to follow the Buddha’s path. I am not talking about some religious path, but a path that is more concerned with how to live your life without harming yourself or others.

Buddhism Buddhism is a non-theistic religion (no belief in a creator god), also considered a philosophy and a moral discipline, originating in India in the 6th and 5th centuries BCE. It was founded by the sage Siddhartha Gautama (the Buddha l. c. 563 - c. 483 BCE) who, according to legend, had been a Hindu prince before abandoning his position and wealth to become a spiritual ascetic and, finally, an enlightened being who taught others the means by which they could escape samsara, the cycle of suffering, rebirth, and death. The Buddha developed the belief system at a time when India was in the midst of significant religious and philosophical reform. Buddhism was, initially, only one of many schools of thought which developed in response to what was perceived as the failure of orthodox Hinduism to address the needs of the people.

Buddhism in America · Watt Munisotaram · Religions in Minnesota This map shows the percent of a country's population that are Buddhists, according to a Pew Research Center study from 2010. Buddhists made up 1.2% of the U.S. population in 2010. By M Tracy Hunter (Own work) [CC BY-SA 3.0 ( via Wikimedia Commons A 2010 Pew Research Center survey recorded Buddhism as the fourth largest religion in the United States after Protestantism, Catholicism, and Judaism, with 1.2% of the nation identifying as Buddhist. The evolution of Buddhism in America is interesting: fairly widespread, general interest in the religion was cultivated in the mid 1800s, partially in conjunction with the building of the first Buddhist temple in America (in San Francisco) and the World’s Parliament of Religions in 1893. Much of the early Buddhism (pre-1900) was Chinese but the turn of the century caused a shift, and the first fifty years of the twentieth century were dominated by Japanese Buddhism.

Christianity - Dogma, Definition & Beliefs Christianity is the most widely practiced religion in the world, with more than 2 billion followers. The Christian faith centers on beliefs regarding the birth, life, death and resurrection of Jesus Christ. While it started with a small group of adherents, many historians regard the spread and adoption of Christianity throughout the world as one of the most successful spiritual missions in human history. Hinduism - Origins, Facts & Beliefs Hinduism is the world’s oldest religion, according to many scholars, with roots and customs dating back more than 4,000 years. Today, with about 900 million followers, Hinduism is the third-largest religion behind Christianity and Islam. Roughly 95 percent of the world’s Hindus live in India.

6 Ways Successful People Are Using Buddhism to Live a Better Life At first glance, time taken out of your busy schedule — and into a spiritual lifestyle — seems like a setback… think again. Many high caliber entrepreneurs are boosting productivity, improving their health and discovering untapped skills all by just learning some simple techniques from Buddhism. Major teachings of Buddhism have been: Buddhism in the United States We ask you, humbly: don't scroll away. Hi, reader in Canada, it seems you use Wikipedia a lot; that's great! This is the 10th appeal we've shown you. How American Buddhism is Like an Elephant To understand Buddhism in the United States, it helps to start with an ancient Buddhist story. A group of blind men describe an elephant. One, who feels the elephant’s tail, describes it as a rope.

Watch: How people respond to Bible quotes when told they're from the Quran People make a lot of assumptions about Islam compared with Christianity and Judaism — particularly that it's more inherently violent. But do people really know what they're talking about, or are they simplifying complicated belief systems to make a political point? The team at Dit Is Normaal decided to put this to the test in the Netherlands, where they're based.