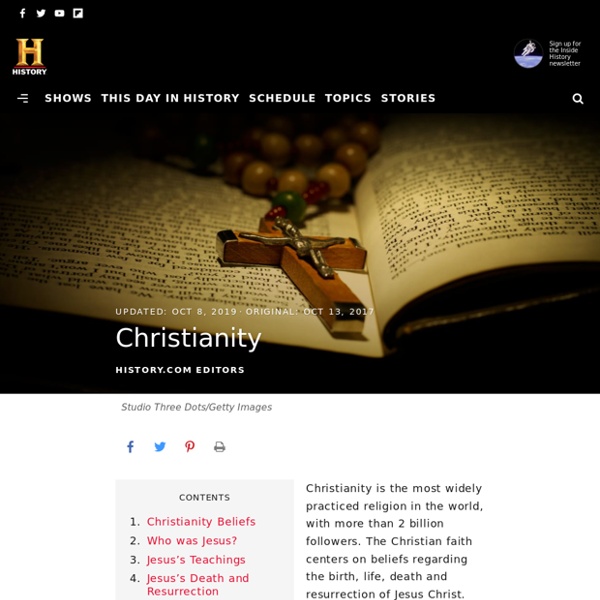 Christianity is the most widely practiced religion in the world, with more than 2 billion followers. The Christian faith centers on beliefs regarding the birth, life, death and resurrection of Jesus Christ. While it started with a small group of adherents, many historians regard the spread and adoption of Christianity throughout the world as one of the most successful spiritual missions in human history. Christianity Beliefs Some basic Christian concepts include: Christians are monotheistic, i.e., they believe there’s only one God, and he created the heavens and the earth. Who was Jesus? Most historians believe that Jesus was a real person who was born between 2 B.C. and 7 B.C. According to the text, Jesus was born to a young Jewish virgin named Mary in the town of Bethlehem, south of Jerusalem in modern-day Palestine. Very little is known about Jesus’s childhood. Jesus was raised Jewish, and according to most scholars, he aimed to reform Judaism—not create a new religion. Jesus’s Teachings

News and current affairs from around the continent The Orthodox Catholic Church is commonly known as the Eastern Orthodox Church, partly to avoid confusion with the Roman Catholic Church. It counts around 200 million members, most of them in eastern Europe, Greece and the Caucasus. Its traditional base is in modern-day Istanbul, previously known as Constantinople. In its first thousand years, the Eastern Orthodox Church coexisted with the Rome-based Catholic Church, although relations between the two were always fraught by both theological and political differences. These differences ultimately led to the East-West Schism, also known as the Great Schism, in 1054 A.D., in which Rome and Constantinople broke with one another. Each side blamed the other for the rupture, sometimes even accusing the other of heresy.

Buddhism - Definition, Founder & Origins Buddhism is a faith that was founded by Siddhartha Gautama (“the Buddha”) more than 2,500 years ago in India. With about 470 million followers, scholars consider Buddhism one of the major world religions. Its practice has historically been most prominent in East and Southeast Asia, but its influence is growing in the West. Many Buddhist ideas and philosophies overlap with those of other faiths. Judaism: Founder, Beliefs & Facts Judaism is the world’s oldest monotheistic religion, dating back nearly 4,000 years. Followers of Judaism believe in one God who revealed himself through ancient prophets. The history of Judaism is essential to understanding the Jewish faith, which has a rich heritage of law, culture and tradition. Judaism Beliefs Jewish people believe there’s only one God who has established a covenant—or special agreement—with them.

HuffPost is now a part of Verizon Media HuffPost is part of Verizon Media. We and our partners will store and/or access information on your device through the use of cookies and similar technologies, to display personalised ads and content, for ad and content measurement, audience insights and product development. Your personal data that may be used Parables of Jesus The parables of Jesus can be found in all the canonical gospels, and in some of the non-canonical gospels, but are located mainly within the three synoptic gospels. They represent a key part of the teachings of Jesus, forming approximately one third of his recorded teachings. Christians place high emphasis on these parables, since they are the words of Jesus, they are believed to be what the Father has taught, indicated by John 8:28 and 14:10.[1][2] Jesus' parables are seemingly simple and memorable stories, often with imagery, and all convey messages. Scholars have commented that although these parables seem simple, the messages they convey are deep, and central to the teachings of Jesus.

10 Christian Stereotypes the World Believes Even If They Aren't True The way the world sees Christian stereotypes is perpetuated by pop culture, old traditions and even social media. If I mention Ned Flanders, you know what I mean. From the world’s perspective, Christians are often seen as the out of touch neighbors who never sin but love to judge those who do. Now, to be fair, sometimes these stereotypes contain a kernel of truth, but I would argue that most of the truth is present only in small pockets of Christianity and not in the majority of believers practicing their faith. These popular stereotypes are teased out in The Resurrection of Gavin Stone, a new faith-based rom-com from producer Dallas Jenkins that releases this week in theaters.

Watch: How people respond to Bible quotes when told they're from the Quran People make a lot of assumptions about Islam compared with Christianity and Judaism — particularly that it's more inherently violent. But do people really know what they're talking about, or are they simplifying complicated belief systems to make a political point? The team at Dit Is Normaal decided to put this to the test in the Netherlands, where they're based. So they disguised a Bible as a Quran, read verses from the Bible (such as "You will have to cut off her hand"), and asked people for their thoughts. People by and large reacted with a lot of "othering" of Muslims — making remarks like, "If you've been raised with this book and these kinds of thoughts, it's going to influence the way you think." Then they found out the verses came from the Bible, not the Quran.

Islam - Five Pillars, Nation of Islam & Definition Islam is the second largest religion in the world after Christianity, with about 1.8 billion Muslims worldwide. Although its roots go back further, scholars typically date the creation of Islam to the 7th century, making it the youngest of the major world religions. Islam started in Mecca, in modern-day Saudi Arabia, during the time of the prophet Muhammad’s life. Today, the faith is spreading rapidly throughout the world.