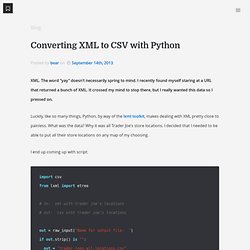 The word “yay” doesn’t necessarily spring to mind. I recently found myself staring at a URL that returned a bunch of XML. It crossed my mind to stop there, but I really wanted this data so I pressed on. Luckily, like so many things, Python, by way of the lxml toolkit, makes dealing with XML pretty close to painless. What was the data? I end up coming up with script: import csvfrom lxml import etree # in: xml with trader joe's locations# out: csv with trader joe's locations out = raw_input("Name for output file: ")if out.strip() is "": out = "trader-joes-all-locations.csv" out_data = [] # use recover=True to ignore errors in the XML# examples of errors in this XML:# missing "<" in opening tag:# fax></fax># missing "</" in closing tag:# <uid>1429860810uid># # also ignore blank textparser = etree.XMLParser(recover=True, remove_blank_text=True) # xml on disk...could also pass etree.parse a URLfile_name = "trader-joes-all-locations.xml" print "nreading xml...

" print "wrote %sn" % out. Neckbeard Republic — bite-sized python screencasts. Interactive Python tutorials. ← Python For Beginners. Advanced Python ← Python programming language. Passing the torch of NumPy and moving on to Blaze. I wrote this letter tonight to the NumPy mailing list --- a list I have been actively participating in for nearly 15 years. Hello all, There is a lot happening in my life right now and I am spread quite thin among the various projects that I take an interest in. In particular, I am thrilled to publicly announce on this list that Continuum Analytics has received DARPA funding (to the tune of at least $3 million) for Blaze, Numba, and Bokeh which we are writing to take NumPy, SciPy, and visualization into the domain of very large data sets.

This is part of the XDATA program, and I will be taking an active role in it. You can read more about Blaze here: You can read more about XDATA here: I personally think Blaze is the future of array-oriented computing in Python. As I look at the coming months and years, my time for direct involvement in NumPy development is therefore only going to get smaller. 2) Don't create array-scalars. 6) Start work on SQL interface to NumPy arrays *now* Python-for-android - Py4A. Python Tutorials, more than 300, updated March 2, 2009 and carefully sorted by topic and category. 10 Free Python Programming Books. Below is a collection of 10 great Python programming books that are available online in full, completely free of charge: Dive into Python This is a fantastic book that is also available in print . 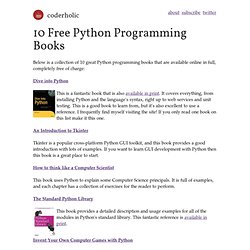 It covers everything, from installing Python and the language's syntax, right up to web services and unit testing. This is a good book to learn from, but it's also excellent to use a reference. An Introduction to Tkinter Tkinter is a popular cross-platform Python GUI toolkit, and this book provides a good introduction with lots of examples. How to think like a Computer Scientist This book uses Python to explain some Computer Science principals. The Standard Python Library This book provides a detailed description and usage examples for all of the modules in Python's standard library. Invent Your Own Computer Games with Python This book is aimed at novice programmers who are interested in writing simple computer games. The Django Book The Pylons Book. The Python Challenge. Web2py Web Framework.

Web2py. I believe that the ability to easily build high quality web applications is of critical importance for the growth of a free and open society. 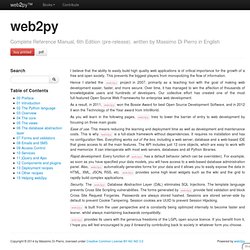 This prevents the biggest players from monopolizing the flow of information. Hence I started the web2py project in 2007, primarily as a teaching tool with the goal of making web development easier, faster, and more secure. Over time, it has managed to win the affection of thousands of knowledgeable users and hundreds of developers. Our collective effort has created one of the most full-featured Open Source Web Frameworks for enterprise web development. As a result, in 2011, web2py won the Bossie Award for best Open Source Development Software, and in 2012 it won the Technology of the Year award from InfoWorld. As you will learn in the following pages, web2py tries to lower the barrier of entry to web development by focusing on three main goals: Ease of use.