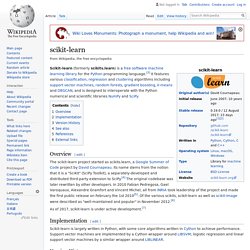 Its name stems from the notion that it is a "SciKit" (SciPy Toolkit), a separately-developed and distributed third-party extension to SciPy.[4] The original codebase was later rewritten by other developers. In 2010 Fabian Pedregosa, Gael Varoquaux, Alexandre Gramfort and Vincent Michel, all from INRIA took leadership of the project and made the first public release on February the 1st 2010[5].

Of the various scikits, scikit-learn as well as scikit-image were described as "well-maintained and popular" in November 2012[update].[6] Biopython Tutorial and Cookbook. 1.1 What is Biopython? 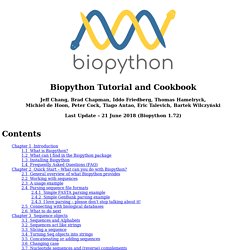 The Biopython Project is an international association of developers of freely available Python ( tools for computational molecular biology. Runestone Interactive. More Information What is Runestone? 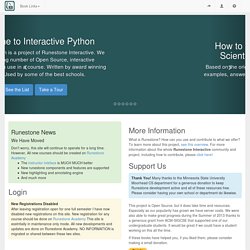 How can you use and contribute to what we offer? To learn more about this project, see this overview. For more information about the whole Runestone Interactive community and project, including how to contribute, please click here! Support Us Thank You! This project is Open Source, but it does take time and resources. Think Python. Hands-on Python Tutorial — Hands-on Python Tutorial for Python 3.1. Python Bibliotheca. S Python Class - Educational Materials. Welcome to Google's Python Class -- this is a free class for people with a little bit of programming experience who want to learn Python. 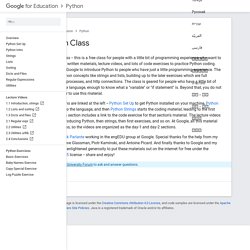 The class includes written materials, lecture videos, and lots of code exercises to practice Python coding. These materials are used within Google to introduce Python to people who have just a little programming experience. The first exercises work on basic Python concepts like strings and lists, building up to the later exercises which are full programs dealing with text files, processes, and http connections.

The class is geared for people who have a little bit of programming experience in some language, enough to know what a "variable" or "if statement" is. Beyond that, you do not need to be an expert programmer to use this material. This material was created by Nick Parlante working in the engEDU group at Google. Tip: Check out the Python Google Code University Forum to ask and answer questions. Ics12_schedule - Katrin Erk's homepage. Ics12_schedule - Katrin Erk's homepage. Assignment 1 § Bioinformatics Algorithms (Spring 2013) Due Feb 6th Goal This class will draw from Biology and from Computer Science. 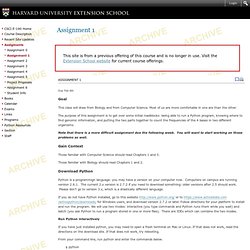 Most of us are more comfortable in one are than the other. The purpose of this assignment is to get over some initial roadblocks: being able to run a Python program, knowing where to find genomic information, and putting the two parts together to count the frequencies of the 4 bases in two different organisms. Note that there is a more difficult assignment due the following week. Gain Context Those familiar with Computer Science should read Chapters 1 and 3. Those familiar with Biology should read Chapters 1 and 2. 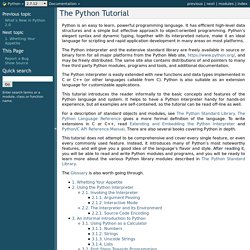 It has efficient high-level data structures and a simple but effective approach to object-oriented programming. Python’s elegant syntax and dynamic typing, together with its interpreted nature, make it an ideal language for scripting and rapid application development in many areas on most platforms. The Python interpreter and the extensive standard library are freely available in source or binary form for all major platforms from the Python Web site, and may be freely distributed. ONLamp.com. Online Python Tutor - Visualize program execution. Execute Python3 Script Online. Execute Python3 Script Online. GuiProgramming. Python has a huge number of GUI frameworks (or toolkits) available for it, from TkInter (traditionally bundled with Python, using Tk) to a number of other cross-platform solutions, as well as bindings to platform-specific (also known as "native") technologies. 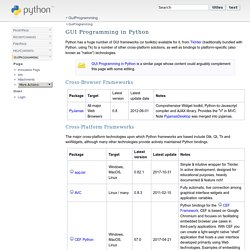 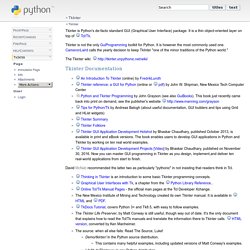 It is a thin object-oriented layer on top of Tcl/Tk. Tkinter is not the only GuiProgramming toolkit for Python. It is however the most commonly used one. CameronLaird calls the yearly decision to keep TkInter "one of the minor traditions of the Python world. " The Tkinter wiki: Tkinter Documentation An Introduction To Tkinter (online) by FredrikLundh Tkinter reference: a GUI for Python (online or pdf) by John W. David McNab recommended the latter two as particularly "pythonic" in not insisting that readers think in Tcl. 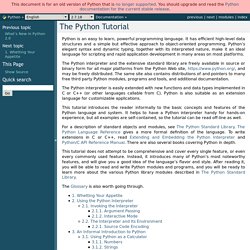 It has efficient high-level data structures and a simple but effective approach to object-oriented programming. Python’s elegant syntax and dynamic typing, together with its interpreted nature, make it an ideal language for scripting and rapid application development in many areas on most platforms. The Python interpreter and the extensive standard library are freely available in source or binary form for all major platforms from the Python Web site, and may be freely distributed. The same site also contains distributions of and pointers to many free third party Python modules, programs and tools, and additional documentation. The Python interpreter is easily extended with new functions and data types implemented in C or C++ (or other languages callable from C).

This tutorial introduces the reader informally to the basic concepts and features of the Python language and system. The Glossary is also worth going through. The Python Challenge. Solving Every Sudoku Puzzle. By Peter Norvig In this essay I tackle the problem of solving every Sudoku puzzle. 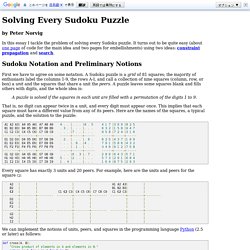 It turns out to be quite easy (about one page of code for the main idea and two pages for embellishments) using two ideas: constraint propagation and search. Sudoku Notation and Preliminary Notions First we have to agree on some notation. A Sudoku puzzle is a grid of 81 squares; the majority of enthusiasts label the columns 1-9, the rows A-I, and call a collection of nine squares (column, row, or box) a unit and the squares that share a unit the peers.

A puzzle is solved if the squares in each unit are filled with a permutation of the digits 1 to 9. That is, no digit can appear twice in a unit, and every digit must appear once. Every square has exactly 3 units and 20 peers. We can implement the notions of units, peers, and squares in the programming language Python (2.5 or later) as follows: def cross(A, B): "Cross product of elements in A and elements in B. " return [a+b for a in A for b in B] Search Results 翻訳. Dive Into Python. Code Like a Pythonista: Idiomatic Python. In this interactive tutorial, we'll cover many essential Python idioms and techniques in depth, adding immediately useful tools to your belt. There are 3 versions of this presentation: ©2006-2008, licensed under a Creative Commons Attribution/Share-Alike (BY-SA) license.

My credentials: I am a resident of Montreal,father of two great kids, husband of one special woman,a full-time Python programmer,author of the Docutils project and reStructuredText,an editor of the Python Enhancement Proposals (or PEPs),an organizer of PyCon 2007, and chair of PyCon 2008,a member of the Python Software Foundation,a Director of the Foundation for the past year, and its Secretary.

In the tutorial I presented at PyCon 2006 (called Text & Data Processing), I was surprised at the reaction to some techniques I used that I had thought were common knowledge. Python Examples. On these pages, I have collected a bit of information about the Python programming language, along with a bunch of examples. These might be useful if you want to see some of the features without actually learning the language itself.

This interactive book is a product of the Runestone Interactive Project at Luther College, led by Brad Miller and David Ranum. There have been many contributors to the project. Our thanks especially to the following: This book is based on the Original work by: Jeffrey Elkner, Allen B. Downey, and Chris MeyersActivecode based on SkulptCodelens based on Online Python TutorMany contributions from the CSLearning4U research group at Georgia Tech.ACM-SIGCSE for the special projects grant that funded our student Isaac Dontje Lindell for the summer of 2013.NSF The Runestone Interactive tools are open source and we encourage you to contact us, or grab a copy from GitHub if you would like to use them to write your own resources.

PythonLearn - Exploring Data. Untitled. Python is an interpreted language, this means that your computer does not run Python code natively, but instead we run our code using the Python interpreter. There are two ways in which you can run Python code: Directly typing commands into the interpreterGood for experimenting with the language, and for some interactive workTyping code into a file and then telling the interpreter to run the code from this fileGood for larger programs, and when you want to run the same code repeatedly While we are initially exploring the language we will use the interpreter interactively.

How you start the interpreter will depend on which operating system you are using, but on a Mac or Linux machine you should start a terminal and then just type the command python. This will print out some information about your installation of python and then leave you with a command prompt which looks like ">>>". If you want to exit the interactive interpreter you can type the command quit(), or type Ctrl-D. Introduction to solving biological problems with Python by pycam. CodeSkulptor.