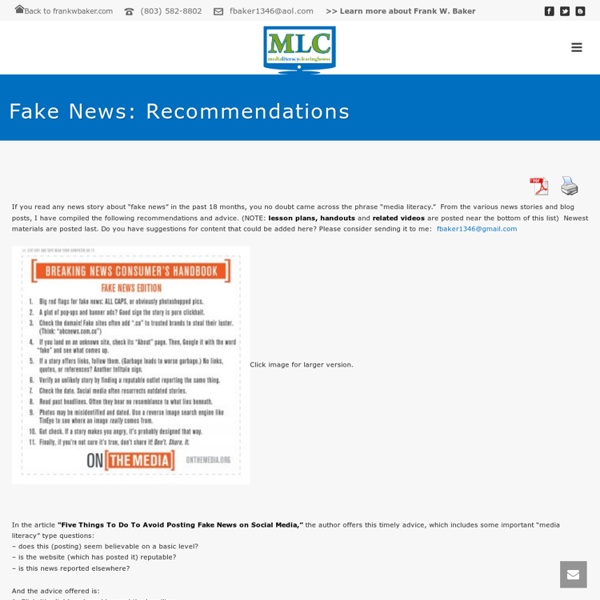 If you read any news story about “fake news” in the past 18 months, you no doubt came across the phrase “media literacy.” From the various news stories and blog posts, I have compiled the following recommendations and advice. (NOTE: lesson plans, handouts and related videos are posted near the bottom of this list) Newest materials are posted last. Do you have suggestions for content that could be added here? Please consider sending it to me: fbaker1346@gmail.com Click image for larger version. In the article “Five Things To Do To Avoid Posting Fake News on Social Media,” the author offers this timely advice, which includes some important “media literacy” type questions: – does this (posting) seem believable on a basic level? And the advice offered is: 1. From: Fake News Is A Real Problem & Here’s How Students Can Solve it(See also, video)The 5 C’s of Critical Consuming #1: Context – Look at the context of the article. #2: Credibility – Check the credibility of the source. 1. 2. 3. 4. 5.

Special Report: The Changing Face of Literacy There has never been a generation of young people more immersed in digital media than this one, many of whom learned to use a mobile device before they even started school. This special report examines how literacy instruction is changing in the digital age, from learning to sound out words in elementary school to grappling with “Macbeth” in high school. It finds that, while experts quibble over what it means to be digitally literate, they agree on one thing: even the youngest children should be learning literacy with a mix of print and digital texts.

Breaking News Consumer's Handbook: Fake News Edition - On The Media BROOKE GLADSTONE: Drawing a distinction between fake and real news is going to be hard for those Facebook and Google employees tasked with bird dogging offending sites, but it shouldn’t be so hard for you, the consumer. Melissa Zimdars, professor of communication and media at Merrimack College, has made a list of more than a hundred problematic news sites, along with tips for sorting out the truthful from the troublesome. She got into the fake news sorting racket after a hot tip. MELISSA ZIMDARS: Someone alerted me to the fact that when you searched for the popular vote on Google, the first Google news item that came up was a fake news website saying that Hillary Clinton lost the popular vote.

Beers & Probst: Responsible Reading and Fake News By Kylene Beers & Robert Probst How do we teach kids across the grades to read responsibly? Close attention to an author’s words – the responsibility a reader shows to the text – implies and requires a responsibility to oneself as well as the words on the page. That responsibility consists not only of a willingness to acknowledge and defend one’s own thoughts and values, but to change our thinking when evidence or reason dictates. A second grader, who read a text about the critical importance of bees in the food chain, adamantly contended, “I don’t like bees because they sting. We don’t need them.”

Lesson Plan: How to Spot Fake News The problem of fake news came to a dizzying head in 2016 when a man fired a shot in a family pizzeria as he “self-investigated” a false report of a child abuse ring led by top democrats. A BuzzFeed report confirmed that fake news stories, such as the one that claimed Hillary Clinton sold arms to ISIS, were actually viewed more times than articles from established and legitimate news sources. Did fake news have an impact on the election? How do we address the problem from here? This lesson plan features a Channel One News report on the problem.

Bias already exists in search engine results, and it’s only going to get worse The internet might seem like a level playing field, but it isn’t. Safiya Umoja Noble came face to face with that fact one day when she used Google’s search engine to look for subjects her nieces might find interesting. She entered the term “black girls” and came back with pages dominated by pornography. A Guide to Fake News Websites Satire is a venerable form of social commentary that uses humor to ridicule human vices and follies. The Internet is rife with it, especially news satire, or fake news, in which fictionalized accounts of current events are presented in mock-journalistic style to lampoon politicians, celebrities, and social mores. Satire is only effective if people recognize it as such, however, and therein lies a major pitfall of publishing fake news on the Internet. Users tend to skim texts instead of reading them, missing important clues and disclaimers. The mechanics of social sharing obscure the origin and aim of viral content, increasing the likelihood that fiction will be mistaken for, or purposely misrepresented as, fact.

To Test Your Fake News Judgment, Play This Game : NPR Ed Fake news has been on Maggie Farley's mind further back than 2016 when President Trump brought the term into the vernacular. Farley, a veteran journalist, says we've had fake news forever and that "people have always been trying to manipulate information for their own ends," but she calls what we're seeing now "Fake news with a capital F." In other words, extreme in its ambition for financial gain or political power. Six easy ways to tell if that viral story is a hoax “And so it begins … ISIS flag among refugees in Germany fighting the police,” blared the headline on the Conservative Post; “with this new leaked picture, everything seems confirmed”. The image in question purported to show a group of Syrian refugees holding ISIS flags and attacking German police officers. For those resistant to accepting refugees into Europe, this story was a godsend.

The End of Reality In a dank corner of the internet, it is possible to find actresses from Game of Thrones or Harry Potter engaged in all manner of sex acts. Or at least to the world the carnal figures look like those actresses, and the faces in the videos are indeed their own. Everything south of the neck, however, belongs to different women. An artificial intelligence has almost seamlessly stitched the familiar visages into pornographic scenes, one face swapped for another. The genre is one of the cruelest, most invasive forms of identity theft invented in the internet era. At the core of the cruelty is the acuity of the technology: A casual observer can’t easily detect the hoax.

Fake News - Resources from Harvard Skip to main content Fake News, Misinformation, and Propaganda This page provides background information, links, and tools from outside organizations to help guide users in navigating potential fake news A Visual Take Library Resources 'Fiction is outperforming reality': how YouTube's algorithm distorts truth It was one of January’s most viral videos. Logan Paul, a YouTube celebrity, stumbles across a dead man hanging from a tree. The 22-year-old, who is in a Japanese forest famous as a suicide spot, is visibly shocked, then amused.

Library Creates Genius Bookmark To Teach Students How To Spot Fake News Though he's often wrong about his sources, President Trump is very right about one thing: there's a lot of fake news swirling around the internet these days. In fact, the problem has become so prevalent that many teachers are taking extra steps to ensure their students can tell which news is fake and which is real! For instance, Reddit user soldier4hire was at his local library when he noticed a unique bookmark. Arming their readers with knowledge, the library was distributing some awesome advice: when reading an article online, check the headline, author and URL. Look at fact-checking sites like Politifact and Snopes to ensure the story's authenticity. Compare it to other reliable sources.