Examples of Epigrams. Epigrams can be hard to find because they have a very broad definition. 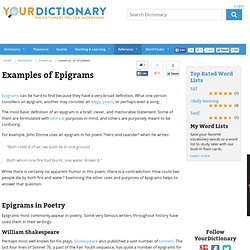 What one person considers an epigram, another may consider an elegy, poem, or perhaps even a song. The most basic definition of an epigram is a brief, clever, and memorable statement. Some of them are formulated with satirical purposes in mind, and others are purposely meant to be confusing. For example, John Donne uses an epigram in his poem "Hero and Leander" when he writes: "Both robb'd of air, we both lie in one ground Both whom one fire had burnt, one water drown'd. " While there is certainly no apparent humor in this poem, there is a contradiction. Epigrams in Poetry Epigrams most commonly appear in poetry. William Shakespeare Perhaps most well known for his plays, Shakespeare also published a vast number of sonnets.

So all my best is dressing old words new, Spending again what is already spent: For as the sun is daily new and old, So is my love still telling what is told. Those four lines are packed with epigrams. 15 Oral Persuasion Techniques. Twenty years after Rio, Severn Cullis-Suzuki looks at state of the Earth. By Rachelle Delaney, Editorial production coordinator Had world leaders paid more attention to a young Severn Cullis-Suzuki when she spoke at the Earth Summit in Rio de Janeiro almost 20 years ago, we might not be in such a state today. 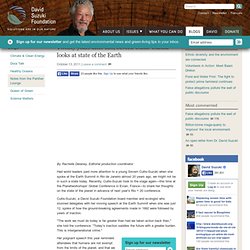 Recently, Cullis-Suzuki took to the stage again—this time at the Planetworkshops' Global Conference in Evian, France—to share her thoughts on the state of the planet in advance of next year's Rio + 20 conference. Cullis-Suzuki, a David Suzuki Foundation board member and ecologist who stunned delegates with her moving speech at the Earth Summit when she was just 12, spoke of how the ground-breaking agreements made in 1992 were followed by years of inaction. "The work we must do today is far greater than had we taken action back then," she told the conference. "Today's inaction saddles the future with a greater burden.

Sign up for our newsletter You can watch the full version of Cullis-Suzuki's keynote speech on the Planet Workshops's website. 'Rio girl' Severn Cullis-Suzuki 20 years on. Cullis-Suzuki is the daughter of environmental guru David Suzuki, but she has become an activist and environmentalist in her own right. 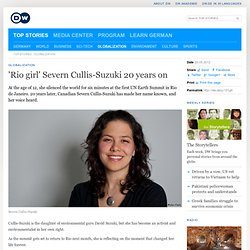 As the summit gets set to return to Rio next month, she is reflecting on the moment that changed her life forever. In 1992, delegates from around the world gathered in Rio de Janeiro, for the first United Nations Conference on Environment and Development, also known as Earth Summit. Tens of thousands of participants from governments, corporations and environmental groups came to talk about a sustainable future. Cullis-Suzuki and three of her friends formed the group ECO: Environmental Children's Organization and raised money to travel from Vancouver, British Columbia, to Rio to attend the summit. Standing ovations. Analysis of Severn Suzuki's speech. Severn Suzuki. Full text of Severn Suzuki’s speech to UN Earth summit. Apr Here is the full text of Severn Cullis-Suzuki’s speech before the UN Earth Summit in Rio, Brazil in 1992, made when she was 12 years old. 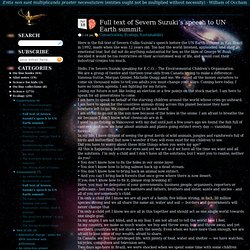 Too bad the world listened, applauded, and shed an emotional tear, but did not do anything substantial for her, as the likes of George W. Bush decided it would be too restrictive on their accustomed way of life, and would cost their industrial cronies too much. Hello, I’m Severn Suzuki speaking for E.C.O. – The Environmental Children’s Organisation. We are a group of twelve and thirteen-year-olds from Canada trying to make a difference: Vanessa Suttie, Morgan Geisler, Michelle Quigg and me.

Severn Cullis-Suzuki has been active in environmental and social justice work ever since kindergarten. Download text here: Full text of Severn Suzuki’s speech to UN Earth summit. The Girl Who Silenced the World at the UN. 35 Greatest Speeches in History. Great speeches of the 20th century.