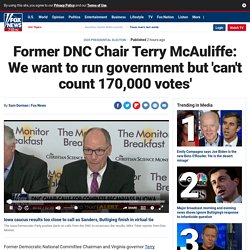 "Here we're trying to take on Donald Trump and we're trying to say we can run the government, and yet we can't count 170,000 votes," McAuliffe told CNN, adding: "We're playing on Trump's turf which we should never cede. " McAuliffe echoed others in criticizing the caucus system and argued that the state wasn't representative enough of minorities. By the time the 2024 election season rolls around, he said, Americans can expect to see a different state starting the primary season. "The other thing I haven’t liked about the Iowa caucus is it’s a state that’s predominantly white, as is New Hampshire," he said. Those figures showed former South Bend, Indiana, Mayor Pete Buttigieg leading Sen.

The Associated Press contributed to this report. Ocasio Cortez Backed Into Corner After Top Democrats Call Her "A Loser", "A Nobody" And "Complete Fraud" Posted by Dean James at Right Wing Tribune By JonDougherty For decades, Democrats have accused Republicans of “racism” for opposing certain legislative initiatives or just whenever they believe use of the term will score political points with the electorate and the blatantly biased “mainstream” media. 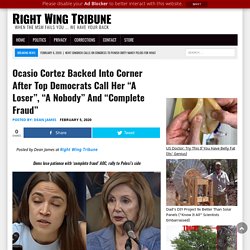 Trending: Hilarious Joke About Nancy Pelosi and Chuck Schumer Has Democrats Seething. Chaos Erupts After Pelosi Trashes AOC, Tlaib, Omar And More- Democrat Party Completely Falling Apart. Posted by Dean James at Right Wing Tribune By JonDougherty We have wondered how long it would take House Speaker Nancy Pelosi (D-Calif.) to tire of the antics routinely expressed by her far-Left ‘Democratic Socialist’ faction, and that question appears to have been answered. 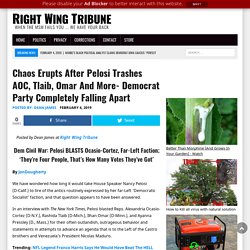 In an interview with The New York Times, Pelosi blasted Reps. Pollak: Elijah Cummings Used Oversight to Defend Obama, Pursue Trump. His legacy on the House Oversight Committee, however, is one of stark partisanship. 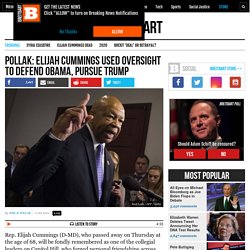 In opposition, he defended abuses by President Barack Obama’s administration; when in the majority, he tried to damage President Donald Trump by any means necessary. Cummings is remembered for his most recent fight with Trump, when the president called the congressman’s district in Baltimore “a disgusting, rat and rodent infested mess.” Trump was reacting to Cummings’s own outbursts at then-Acting Secretary of Homeland Security Kevin K. McAleenan over the alleged mistreatment of migrant children in U.S. Border Patrol facilities at the southern border. Omar Backs Bernie: The America I Dreamed About 'Is Not a Reality Yet' She told her followers Sanders is the “the only candidate who has built a movement,” adding the socialist senator’s vision will help establish the America she dreamt of, which is “not a reality yet.” 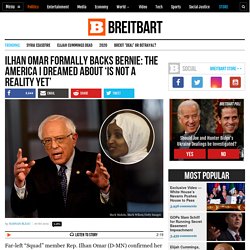 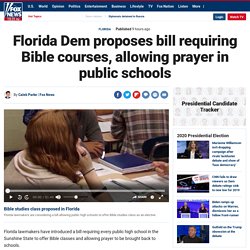 Rep. Kim Daniels, a Democrat and author of several faith-based books, is behind House Bill 341, which "requires each school district to offer specified courses relating to religion, Hebrew Scriptures, & Bible to certain students as elective courses. " In addition to the "study of the Bible and religion," the bill would permit a "brief meditation period" at every school in the state. Earlier this year, when Daniels proposed a similar bill making Bible classes optional, which was approved in a 11-3 vote, opponents raised concerns that the Bible classes might be subject to lawsuits over the Constitutionality, FOX 35 reported. If passed, the newly proposed bill would go into effect in July 2020. She has also championed a bill to fight discrimination in schools against religious staff, students and parents. Trump Gets The Last Laugh After Chuck & Nancy Storm Out Of WH & Tell Reporters He Had A 'Meltdown' - The White House, on Wednesday, invited lawmakers of both parties and chambers of Congress to discuss President Trump’s decision to withdraw U.S. troops from northern Syria. 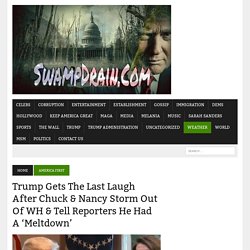 Senate Minority Leader Chuck Schumer, however, told reporters that the President “had a “meltdown” and called House Speaker Nancy Pelosi (D-CA) a “third-rate politician” during the meeting, to which, the President responded on Twitter getting the last laugh. Just before lawmakers left for the meeting, the House passed a resolution in a 354-60 vote that rebuked Trump’s decision to retreat from Syria. “What we witnessed on the part of the president was a meltdown, sad to say,” Pelosi told reporters of the President pertaining to the House vote. Let's get real: Democrats were first to enlist Ukraine in US elections. Dems Vote To Enhance Med Care for Illegals Now, Vote Down Vets Waiting 10 Years for Same Service. 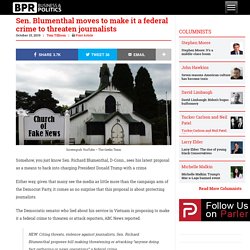 Richard Blumenthal, D-Conn., sees his latest proposal as a means to back into charging President Donald Trump with a crime. Either way, given that many see the media as little more than the campaign arm of the Democrat Party, it comes as no surprise that this proposal is about protecting journalists. The Democratic senator who lied about his service in Vietnam is proposing to make it a federal crime to threaten or attack reporters, ABC News reported.