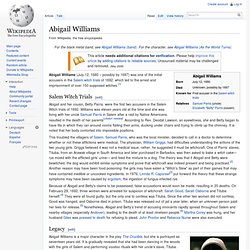 Williams was eleven years old at the time and she was living with her uncle Samuel Parris in Salem after a raid by Native Americans resulted in the death of her parents[citation needed]. Thomas Putnam. Thomas Putnam (March 22, 1652 [O.S. 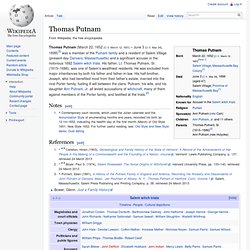 March 12, 1651] – June 3 [O.S. May 24], 1699)[3] was a member of the Putnam family and a resident of Salem Village (present-day Danvers, Massachusetts) and a significant accuser in the notorious 1692 Salem witch trials. His father, Lt. Thomas Putnam, Sr. (1615–1686), was one of Salem's wealthiest residents. He was excluded from major inheritances by both his father and father-in-law. Notes[edit] References[edit] Elizur Holyoke. Captain Elizur Holyoke (c. 1624 – 1676) of Springfield, Massachusetts was the namesake of the mountain, Mount Holyoke, and (indirectly), of the city of Holyoke, Massachusetts. 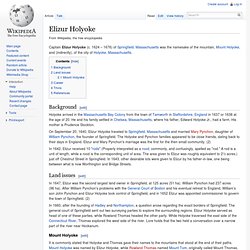 Background[edit] Holyoke arrived in the Massachusetts Bay Colony from the town of Tamworth in Staffordshire, England in 1637 or 1638 at the age of 20. He and his family settled in Chelsea, Massachusetts, where his father, Edward Holyoke Jr., had a farm. His mother is Prudence Stockton. On September 20, 1640, Elizur Holyoke traveled to Springfield, Massachusetts and married Mary Pynchon, daughter of William Pynchon, the founder of Springfield. 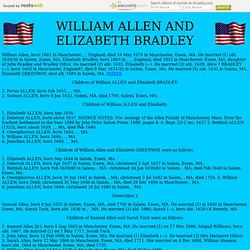 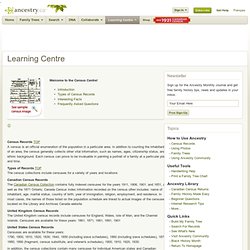 In addition to counting the inhabitants of an area, the census generally collects other vital information, such as names, ages, citizenship status, and ethnic background. Each census can prove to be invaluable in painting a portrait of a family at a particular place and time. Types of Records The census collections include censuses for a variety of years and locations: 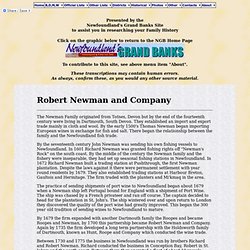 They established an import and export trade mainly in cloth and wool. By the early 1500's Thomas Newman began importing European wines in exchange for fish and salt. There began the relationship between the family and the Newfoundland fish trade. By the seventeenth century John Newman was sending his own fishing vessels to Newfoundland. In 1601 Richard Newman was granted fishing rights off "Newman's Rock" on the south coast. The practice of sending shipments of port wine to Newfoundland began about 1679 when a Newman ship left Portugal bound for England with a shipment of Port Wine.

By 1679 the firm expanded with another Dartmouth family the Roopes and became Roopes and Newman, by 1700 this partnership became Robert Newman and Company. World Tree Project: My Database. International Genealogy Sleuth.

Historian Activities in Nova Scotia. From 1750-1752, German, French and Swiss colonists were brought by the British government to settle in Nova Scotia. 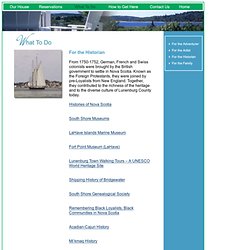 Known as the Foreign Protestants, they were joined by pre-Loyalists from New England. Together, they contributed to the richness of the heritage and to the diverse culture of Lunenburg County today. Histories of Nova Scotia South Shore Museums LaHave Islands Marine Museum Fort Point Museum (LaHave) Lunenburg Town Walking Tours – A UNESCO World Heritage Site.

South Shore Genealogical Society. Nova Scotia - German Passenger Lists. From 1750-1752, twelve ship loads of Germans arrived in Halifax, Nova Scotia, as part of an attempt at colonization of the territory by protestant Germans. 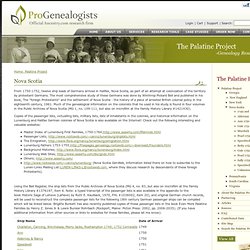 The most comprehensive study of these Germans was done by Winthrop Pickard Bell and published in his book, The "foreign Protestants" and the settlement of Nova Scotia : the history of a piece of arrested British colonial policy in the eighteenth century, 1961. Much of the genealogical information on the colonists that he used in his study is found in four volumes in the Public Archives of Nova Scotia (MG 1, no. 109-111, but also on microfilm at the Family History Library #1421430). Downeast.htm. WENTZEL (WENZEL) FAMILY. Downeast.htm. How To Make Ghosts In Photoshop or GIMP.

Halloween is fast approaching, so why not use this how-to and haunt your friends? 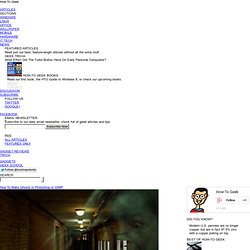 A few minutes Photoshop or GIMP handiwork, and you can be making scary pictures to send to everybody you know. Keep reading! This how-to is a lot of fun, and hopefully you’ll enjoy making your own horrific images. Take a look and see how easy it is, and maybe even send us some examples of your handiwork once you try it yourself! Making Ghosts in Photoshop We’ll start with some good source material. We’ll also use this bizarre hallway as a backdrop for our ghost photo. Crop (shortcut key ) down to just the area you want to isolate for your ghostly image. Make a new layer on top of your background layer by pressing the in the Layers panel. We’re going to do some brushwork, so grab your brush tool by pressing , then right click to set the hardness. 100% is preferable for hard edges, although softer brushes may be good for areas like her hair, that aren’t well defined. to create a new layer.