House of Alpin. The House of Alpin is the name given to the kin-group which ruled in Pictland and then the kingdom of Alba from the advent of Kenneth MacAlpin (Cináed mac Ailpín) in the 840s until the death of Malcolm II (Máel Coluim mac Cináeda) in 1034. 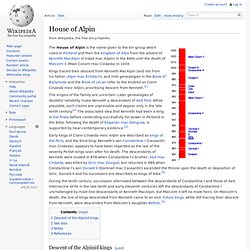 Kings traced their descent from Kenneth MacAlpin (and not from his father, Alpín mac Echdach), and Irish genealogies in the Book of Ballymote and the Book of Lecan refer to the kindred as Clann Cináeda meic Ailpín, prioritising descent from Kenneth.[1] The origins of the family are uncertain. Later genealogies of doubtful reliability make Kenneth a descendant of Áed Find. While plausible, such claims are unprovable and appear only in the late tenth century.[2] The associated idea that Kenneth had been a king in Dál Riata before contending successfully for power in Pictland in the 840s, following the death of Eóganán mac Óengusa, is supported by near-contemporary evidence.[3] Descent of the Alpínid kings[edit] See also[edit] Siol Alpin Notes[edit] The House of Alpin Feature Page on Undiscovered Scotland. The House of Alpin was named after King Alpin II of Dalriada. 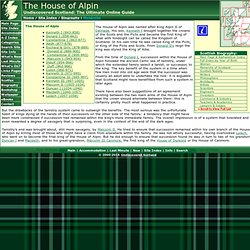 His son, Kenneth I brought together the crowns of the Scots and the Picts and became the first King of what with hindsight can be called the Kingdom of Scotland. In his own time he was called King of the Picts, or King of the Picts and Scots. Category:House of Alpin. The House of Alpin. Vaught-Jasper-Trusty-Molloy, Genealogy Tree View of the ancient Iona Abbey on the island of Iona Little has been written about many of the early kings since written records were not kept. 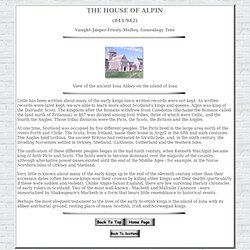 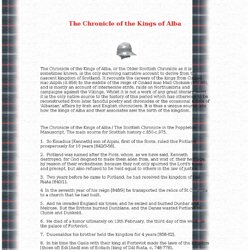 It recounts the careers of the kings from Cináed mac Ailpín (d.858) to the middle of the reign of Cináed mac Maíl Choluim (971-95), and is mostly an account of internecine strife, raids on Northumbria and campaigns against the Vikings. Whilst it is not a work of any great literary merit it is the only native source to the history of this period which has otherwise to be reconstructed from later fanciful poetry and chronicles or the occasional notice of 'Albanian' affairs by Irish and English chroniclers. It is thus a unique source into how the kings of Alba and their associates saw the birth of the kingdom. The Chronicle of the Kings of Alba / The Scottish Chronicle in the Poppleton Manuscript. 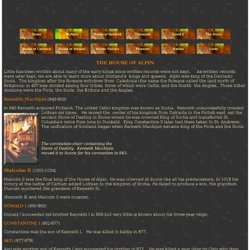 As written records were later kept, we are able to learn more about Scotland's kings and queens. Alpin was king of the Dalriadic Scots. The kingdom after the Romans withdrew from Caledonia (the name the Romans called the land north of Britannia) in 407 was divided among four tribes, three of which were Celtic, and the fourth the Angles. Those tribal divisions were the Picts, the Scots, the Britons and the Angles. Kenneth MacAlpin (843-859) In 843 Kenneth acquired Pictland. Invaded Lothian six times. Siol Alpin home page.

Genealogical_Table_Macalpin.jpg (775×844) The Kings of Scotland up to James VI. Kenneth I or Kenneth MacAlpin is the founder of the dynasty which ruled Scotland for much of the medieval period. 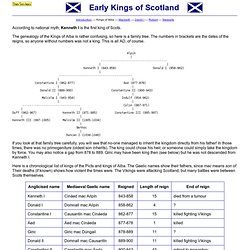 During his reign and after, the Vikings were attacking Scotland, and settling in Shetland,the Orkneys, Caithness, Sutherland, the Western Isles and the Isle of Man. Kenneth and his immediate descendents are called Kings of the Picts. The Picts lived in Scotland north of the Forth and Clyde from Roman times to the tenth century.

However, little in the way of Pictish writing has survived, so records are limited, and little is known of them. Scottish Houses of MacAlpin and Dunkeld Family Tree.