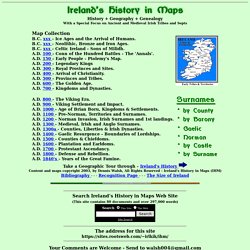 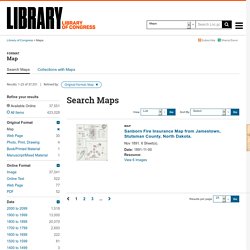 Irish Surname Maps. With regard to the values after each surname, the first value is the number of people in Ireland with this surname in 1901 and the second value is that surname's rank in 1901, i.e. 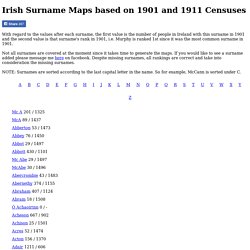 Murphy is ranked 1st since it was the most common surname in 1901. Not all surnames are covered at the moment since it takes time to generate the maps. If you would like to see a surname added please message me here on facebook. Despite missing surnames, all rankings are correct and take into consideration the missing surnames. Free Interactive U.S. County Formation Maps - Genealogy Girl Talks.

I’ve been using a website in my family history research for years. 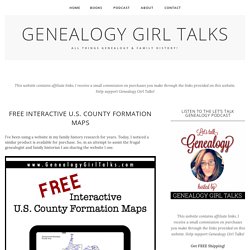 Today, I noticed a similar product is available for purchase. So, in an attempt to assist the frugal genealogist and family historian I am sharing the website I use. What can the Maps of U.S. website help you with? It will allow you to find valuable information on U.S. counties, compare older maps to newer maps of the same area, and view changes in the borders of counties. How do you use this website? Navigate to the website and select the State you are interested in researching. Click through the State’s county “formation years” to view the different counties as they were formed. You can also play a video of the progression of each State’s counties as they unfold or you can click through each year individually. 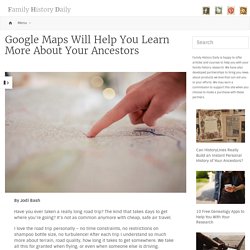 The kind that takes days to get where you’re going? It’s not as common anymore with cheap, safe air travel. I love the road trip personally – no time constraints, no restrictions on shampoo bottle size, no turbulence! After each trip I understand so much more about terrain, road quality, how long it takes to get somewhere. One such trip was a hot August with my mother to several small central Texas towns in search of family evidence – we called it the dead relative tour. But, we can’t walk in everyone’s footsteps. Map Out Your Ancestors for Free You don’t need to spend money on software to map your ancestors travels. Advertisement This couple drove everywhere! The diary entry read: “Left Midland [Texas] about 10:00 this morning – ate lunch in Colorado [city not state] – stopped in Abilene and in Brownwood for a while.

I used the mapping technique again, when writing about my great-grandmother, Sinia Covey Guthrie. Know Your Counties. These 26 Maps Show How Ethnic Groups Are Divided Across The United States. If you ever doubted that the different ancestry groups stick together, then doubt no more! 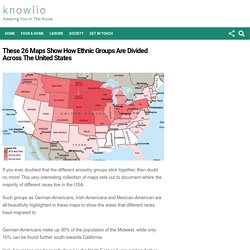 This very interesting collection of maps sets out to document where the majority of different races live in the USA. Such groups as German-Americans, Irish-Americans and Mexican-American are all beautifully highlighted in these maps to show the areas that different races have migrated to. German-Americans make up 30% of the population of the Midwest, while only 10% can be found further south towards California. Irish-Americans can be mostly found in the North East and very seldom further south, while Mexican-Americans are predominantly to be found in the south west, with very few living as far as New England. The maps also include such information as population numbers of each group, although they do include people who belong to more than one group. This collection of maps make up the largest collection of ancestry and racial groups in the USA. 49,840,035 Germans live mostly in the Midwest.

Worldwide Genealogy ~ A Genealogical Collaboration: Collaborative Geo-referencing of Maps. Atlas of Historical County Boundaries Project. National Data Click on the national map to see all of the Atlas' content related to the nation at one view. 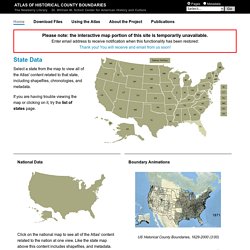 Like the state map above this content includes shapefiles, and metadata. Boundary Animations. Historic maps of Oklahoma go online for public viewing. Thousands of Oklahoma maps from railroads through Indian Territory to town plats, cities and oilfields have been collected by the Oklahoma Historical Society for more than a century. 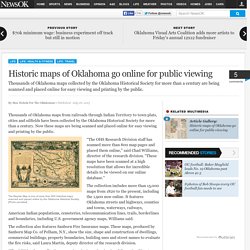 Now these maps are being scanned and placed online for easy viewing and printing by the public. “The OHS Research Division staff has scanned more than 800 map pages and placed them online,” said Chad Williams, director of the research division. “These maps have been scanned at a high resolution that allows for incredible details to be viewed on our online database.” Plan of Bay Ridge parkway. USGS Historical Topographic Map Explorer. David Rumsey Historical Map Collection.