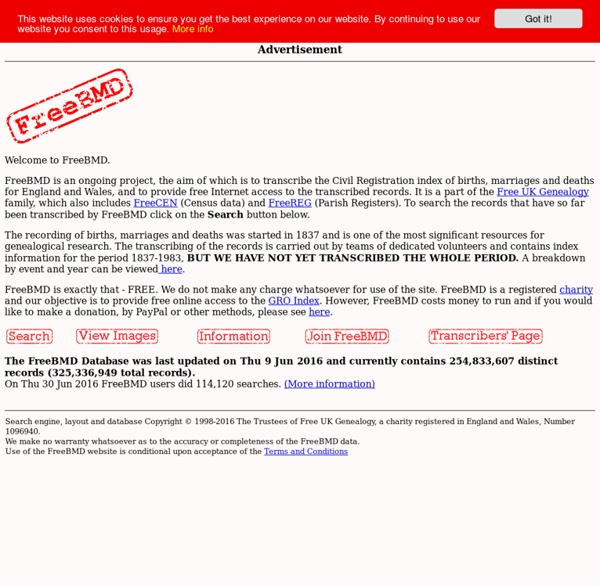 Advertisement Welcome to FreeBMD. FreeBMD is an ongoing project, the aim of which is to transcribe the Civil Registration index of births, marriages and deaths for England and Wales, and to provide free Internet access to the transcribed records. It is a part of the FreeUKGEN family, which also includes FreeCEN (Census data) and FreeREG (Parish Registers). To search the records that have so far been transcribed by FreeBMD click on the Search button below. The recording of births, marriages and deaths was started in 1837 and is one of the most significant resources for genealogical research.

Virtual Reality Aimed At The Elderly Finds New Fans Virginia Anderlini (right) was the first private client to try out Dr. Sonya Kim's new virtual reality program for the elderly, and says she's eager to see more. Kim's handful of programs are still at the demo stage. Kara Platoni/KQED hide caption toggle caption Kara Platoni/KQED Virginia Anderlini (right) was the first private client to try out Dr. Kingfisher Project – Description Greek Sailaways are one to two week sailing holidays in a Christian environment offered through August and September, aboard the S/Y “ENCOUNTER ” our 90ft (27m) traditional gaff rigged schooner. Aboard the “Encounter” you’ll have the opportunity to experience the joy and beauty of sailing among some of the most beautiful islands in the Mediterranean Sea. In the evenings however, you’ll be able to relax as you gaze at the setting sun, laying safely at anchor in a remote cove enjoying fine Greek and international meals, good company and the gentle sounds of the sea. The daily schedule will involve sail training, knots, navigation, snorkeling over reefs and through caves, cliff jumping and windsurfing with lessons included, also excursions ashore, as well as ample opportunity to relax with a good book or chat with a friend, or just lay on the deck and soak in the sun. Most days we will take the opportunity to explore God’s Word in an informal and friendly atmosphere.

Can soup change the world? Detroit - once a manufacturing giant - went bust in 2013. An innovative crowd-funding project called Detroit Soup is helping the city get back on its feet. It's a typical winter's night in Michigan. Snow is falling, and so is the temperature - it's -15C at last count. Unsociable conditions such as these would put paid to plans for many people, but not in Detroit. "Winter 'Soups' always do well," says Detroit Soup founder Amy Kaherl, preparing for the latest of her fundraising events. “Consciousness Creates Reality” – Physicists Admit The Universe Is Immaterial, Mental & Spiritual “Consciousness creates reality,” a statement that has gained a lot of attention across various alternative media outlets around the world. Make no mistake, consciousness has been (for quite some time) studied by numerous scientists, especially in its relation to quantum physics and how it might be correlated with the nature of our reality. What is consciousness? Consciousness includes a number of things.

The future is here at Design Museum / toothpicnations Main and bottom left: The future is here exhibition designed by by Lucienne Roberts+ and drMM; Bottom right: KUKA Robotics' AGILUS robots Work has kept me quite busy lately, but I finally managed to visit "The future is here: a new industrial revolution" exhibition at the Design Museum on its last day at the last hours! We have all witnessed the industrial revolution ( I mean at the 2012 Olympics Opening ceremony directed by Danny Boyle), and this exhibition focused on the possibility of a new one based on the past, current industry trends and technology. Top left: Orangebox's Do task chair; Top middle: Endless Flow dining chair by Dirk Vander Kooij; Top right: CNC (computer numerical controlled) technology; Bottom right: Puma's biodegradable trainers The exhibition examined areas like mass manufacturing and production; mass customisations; sustainability and the recyclable products; crowd sourcing and 3-D printing.

Unlimited Thinking For Limited Spaces July 23, 2009 by Robin Plaskoff Horton Three young German architects have created a new area of architecture: arbo-architecture. Ferdinand Ludwig and fellow architects, Oliver Storz and Hannes Schwertfeger, call their new specialty “building botany.” As part of this, the three men are building structures made from plants as well as studying the elasticity of plane trees and examining how effectively willows can grow around steel pipes at the University of Stuttgart’s Institute of Basics in Modern Architectural Design. In this way, they plan to begin building an eight-meter (26-foot) tower near Lake Constance in southern Germany at the end of July.